In 1983, American physiologist Benjamin Libet conducted an experiment that became a landmark in the field of cognitive sciences. It got psychologists, neuroscientists, and philosophers either very excited or very concerned.

The study itself was simple. Participants were connected to an apparatus that measured their brain and muscle activity, and were asked to do two basic things. First, they had to flex their wrist whenever they felt like doing so.

Second, they had to note the time when they first became aware of their intention to flex their wrist. They did this by remembering the position of a revolving dot on a clock face. The brain activity Libet was interested in was the “readiness potential”, which is known to ramp up before movements are executed.

This seemed to suggest participants’ brains had already “decided” to move, half a second before they felt consciously aware of it. 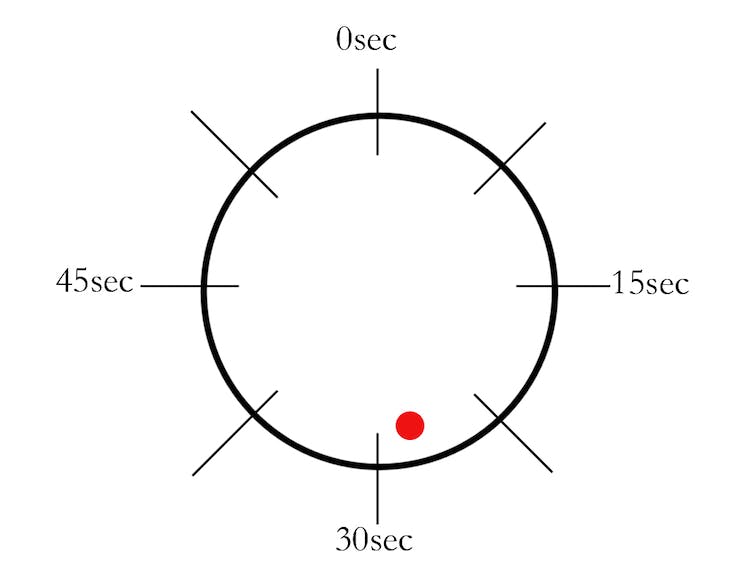 In Libet’s experiments, participants had to remember where the dot was at the time they made the conscious decision to flex their wrist. Tesseract2/Wikimedia Commons, CC BY-SA

Had neuroscience just solved the free will problem?

Some researchers have since argued that the intuitive idea that we have a consciousness (or a “self”) that is distinct from our brains — and that can cause things in the real world — might be wrong. Really being the “author” of our actions seemed to suggest, at least for many people, that an “I” is making the decisions, not the brain. However, only brains (or neurons) can really cause us to do things, so should we be surprised to find that an intention is a consequence rather than the origin of brain activity?

Others were less convinced of Libet’s study and have attacked it from all possible angles. For example, it has been questioned whether flexing the wrist is really a decision, as there is no alternative action, and whether we can really judge the moment of our intention so precisely. Perhaps, sceptics suggested, the findings could be a lot of fuss about nothing.

But Libet’s findings have been successfully replicated. By using other neuroimaging methods such as functional magnetic resonance imaging (fMRI) in combination with clever new analysis techniques, it has been shown that the outcome of decisions between two alternatives can be predicted [several seconds before the reported conscious intention].

Even Libet himself did not seem comfortable claiming our “will” does not matter at all. What if we could still say “no” to what the brain wants to do? This would at least give us a “free won’t”. To test this, one study asked participants to play a game against a computer that was trained to predict their intentions from their brain activity. The research found participants could cancel their actions if the computer found out quickly what they intended to do, at least up to around 200 milliseconds before the action, after which it was too late.

It depends what you mean by free

Another way to look at Libet’s study is to recognise it might not be as closely related to the “free will” problem as initially thought. We might be mistaken in what we think a truly free decision is. We often think “free will” means: could I have chosen otherwise? In theory, the answer might be no — being transported back in time, and placed into exactly the same circumstances, the outcome of our decision might necessarily be exactly the same. But maybe that doesn’t matter, because what we really mean is: was there no external factor that forced my decision, and did I freely choose to do it? And the answer to that might still be yes.

If you are worried about “free will” just because sometimes there are external factors present that influence us, think about this: there are also always factors inside of us that influence us, from which we can never fully escape — our previous decisions, our memories, desires, wishes and goals, all of which are represented in the brain.

Some people might still maintain that only if nothing influences our decision at all can we be really free. But then there is really no good reason to choose either way, and the outcome might just be due to the random activity of neurons that happen to be active at the time of decision-making. And this means our decisions would also be random rather than “willed”, and that would seem even less free to us. 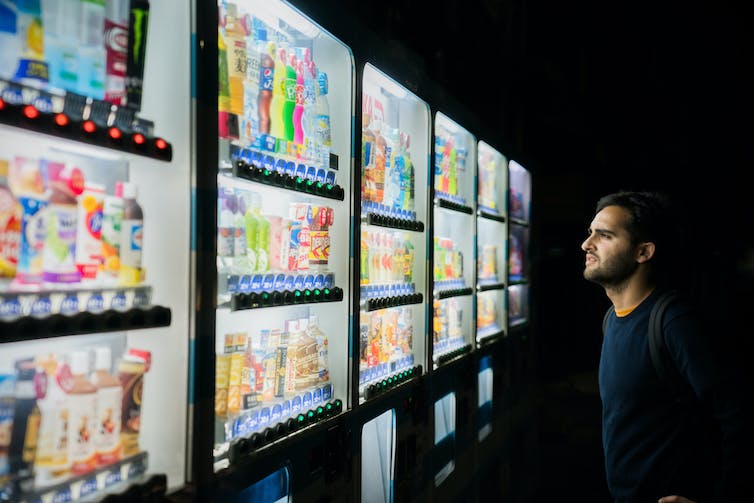 There are always things influencing us that are beyond our control. Victoriano Izquierdo/Unsplash, CC BY

Most of our decisions require planning because they are more complex than the “spontaneous” decisions investigated in Libet-style studies, like whether to buy a car, or get married, which are what we really care about. And interestingly, we don’t tend to question whether we have free will when making such complex decisions, even though they require a lot more brain activity.

If the emerging brain activity reflects the decision process rather than the outcome, we might not even have a philosophical contradiction on our hands. It matters a lot what we call “the decision” — is it the moment we reach an outcome, or the entire process that leads to reaching it? Brain activity in Libet-style studies might simply reflect the latter, and that suddenly does not sound so mysterious anymore.

While Libet’s classic study might not have solved the problem of free will, it made a lot of clever people think hard. Generations of students have argued long nights over beer and pizza whether they have free will or not, and researchers have conducted increasingly innovative studies to follow in Libet’s footsteps.

Exciting questions have arisen, such as which brain processes lead to the formation of a voluntary action, how we perceive agency, what freedom of will means for being responsible for our actions, and how we change our mind after making an initial decision.

Researchers had to acknowledge they might not be able to provide a definite answer to the big philosophical question. But the field of cognitive neuroscience and voluntary decisions is more alive, interesting and sophisticated than ever before, thanks to the bold attempts by Libet and his successors to tackle this philosophical problem using science.