The COVID-19 pandemic has caused significant disruptions to all major sports in Australia, but perhaps the most fascinating — and unlikely — change is the playing of the AFL grand final in Brisbane.

When most Australians think of sports preferences by state, AFL naturally comes out on top in Victoria, while rugby union is thought of as a Queensland and NSW game.

But Australian rules football was actually played first in Queensland — and it was only a quirk of history, as well as an enduring love of the British empire, that caused Queenslanders to eventually switch allegiances.

Sports in the early colonial days

Unlike many countries, Australia supports four major football codes (Australian rules, rugby union, rugby league and soccer). The story of how these four sports developed here goes back to the pre-Federation days.

After the British began colonising Australia, sports were one of the most important ways for early settlers to replicate British culture. It was a demonstration of British nationalism and loyalty to the home country.

The first sports in Australia included horse racing and cricket, but were soon followed by others, such as coursing (hunting with dogs) and bowling.

The other popular British sport at the time was football. But unlike other sports, there were various forms of football played in the home country. This was particularly evident in the British private boys’ schools, where football was played according to the respective schools’ rules.

Read more: Indigenous players didn't invent Australian rules but did make it their own

Two distinct forms of football ultimately emerged in England — what we now call soccer and rugby union. This history has been very contentious and still provides some very passionate debate.

As Britain began colonising various parts of the world, rugby union emerged as the dominant football sport, not soccer. That is, the elite sanctioned rugby union as the imperial football code.

This legacy can be felt today as New Zealand, South Africa and Australia are the dominant rugby union countries, while in the former colonies of countries like Spain, Portugal and France, soccer is the sport of choice.

In the late 1850s, momentum grew in Melbourne to establish football clubs and play matches. The only problem was rugby union and soccer had not yet been codified — that is, there was no accepted set of rules.

So, the early settlers in Melbourne attempted to establish their own rules for “football”, creating what they believed would be an easily understood, safe and attractive game. It took some time to get right.

In the first trial of the new rules in 1859, for example, no goals were kicked due to the wind and the closeness of the goal posts. According to a report from the time,

Some little unpleasantness was occasioned owing to the vague wording of the rule which makes ‘tripping’ an institution, and after the match a meeting of the committee was held, at which most of the existing rules underwent revision, and some new ones were added.

From the very beginning, Australian rules football developed as its own thing. The members of the Melbourne Cricket Club who established the rules were free to experiment as they liked to produce a game they believed would grow in popularity. 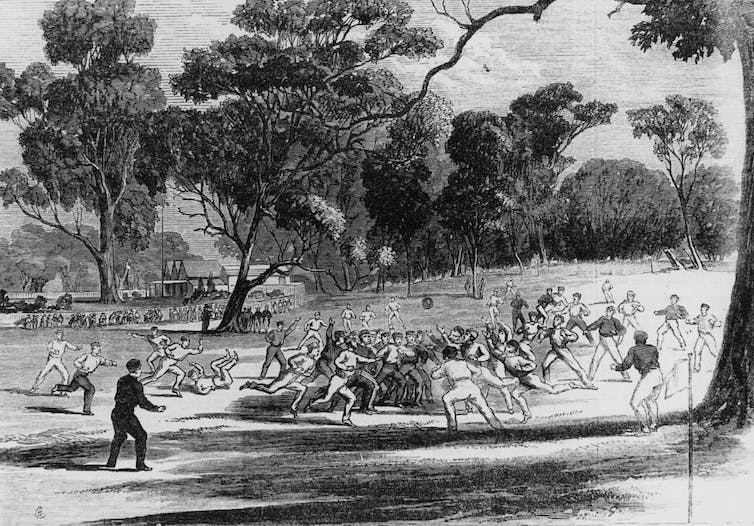 Wood engraving of an Australian rules football match at the Richmond Paddock, Melbourne, about 1866. Wikimedia Commons

A battle between football codes in Queensland

Queensland became an independent colony late in comparison to the others. And in 1866, the first Brisbane Football Club was formed, adopting the Melbourne rules of the game.

For the next decade, Australian rules was the official football code in Queensland, though the Brisbane Football Club also dabbled in some rugby union games.

When it became clear rugby union was becoming the dominant football code across the British empire, however, there was a concerted push in Queensland to change to rugby union. And in 1876, the various Brisbane football clubs switched allegiances, though this wasn’t without controversy.

Read more: The AFL has moved the grand final from Melbourne for the first time – but it has a far more pressing issue

For several years, supporters and clubs were torn between the two games. It’s clear from media reports that Australian rules had some advantages: the game was more enjoyable to play and watch, easier to understand, and safer.

Rugby union promoters, meanwhile, had difficulty translating their rules into practice, leading to confusion. As one rugby union detractor said in the Brisbane Courier in 1876,

there is too much holding of the ball and disputing about ‘on’ and ‘off’ side. This is not football at all, and for this reason these rules were discarded by Melbournians, and new ones, far better, substituted. The rugby union code contain fifty-seven rules, which the Melbourne rules are only fifteen.

But rugby union was the game preferred by the elites; it was the British game. So, rugby union ultimately prevailed in Queensland (as well as NSW) from around 1880. 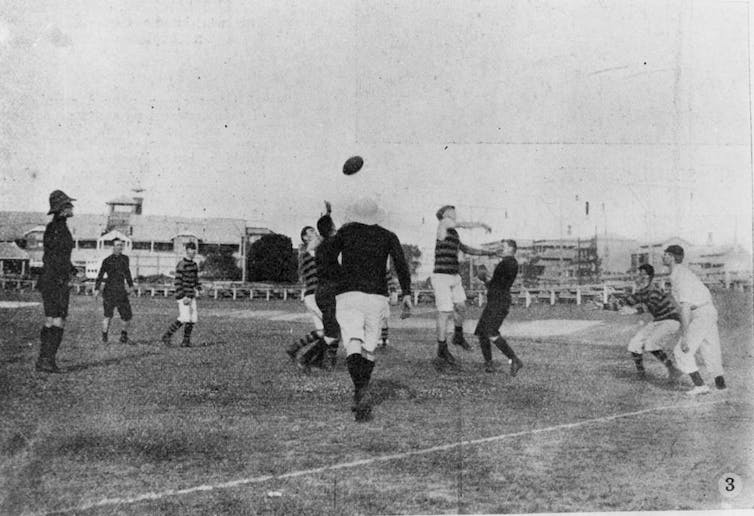 This divided football landscape changed very little throughout the 20th centuries. But as the codes have become more commercialised in recent years, the AFL in particular has made efforts to expand its reach beyond Victoria and reach new players and spectators in NSW and Queensland.

This process began with the expansion of the VFL/AFL, beginning in the 1980s. But more significantly, there has also been growth at the grassroots level among both adults and children, men and women. 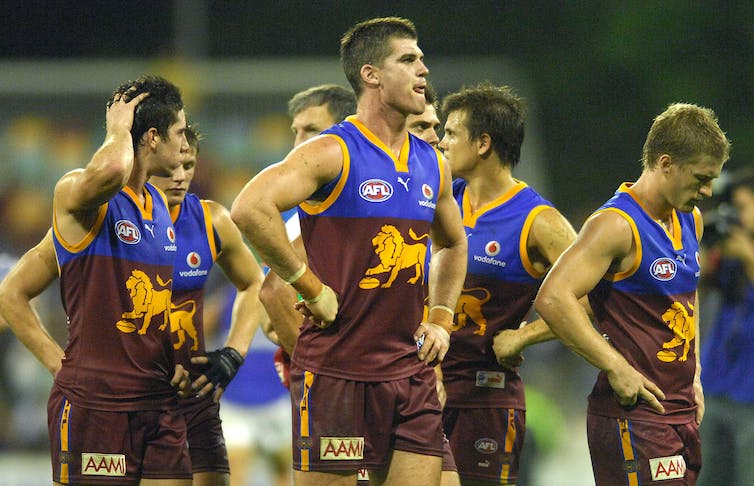 This year, the pandemic provided the AFL with a great opportunity to make even further inroads into the rugby-playing states. Not only did Brisbane host matches when Victoria went into lockdown, but spectators started watching in greater numbers, too.

The opening match of the finals series earlier this month between Port Adelaide and Geelong saw huge increases in Sydney (up 259% over the 2019 week one final) and Brisbane (up 112% over 2019).

Read more: With the debut of GWS, Aussie Rules comes home to Sydney

AFL chief executive Gil McLachlan even went as far as to say,

I’m not saying we’re the number one sport here in Queensland, but it’s certainly nice to be in the conversation. Right now, it feels like it’s close to being Queensland’s game.

If these spectator numbers are any indication, Australian rules football is coming back to Queensland. And it might not be leaving like it did in the early 1880s.