The tawny frogmouth is one of Australia’s most-loved birds. In fact, it was first runner-up in the Guardian/BirdLife Australia bird of the year poll (behind the endangered black-throated finch).

Tawny frogmouths are found throughout Australia, including cities and towns, and population numbers are healthy. We’re now in the breeding season – which runs from August to December – so you may have been lucky enough to see some pairs with chicks recently.

Here are eight fascinating things about tawny frogmouths that you might not know. 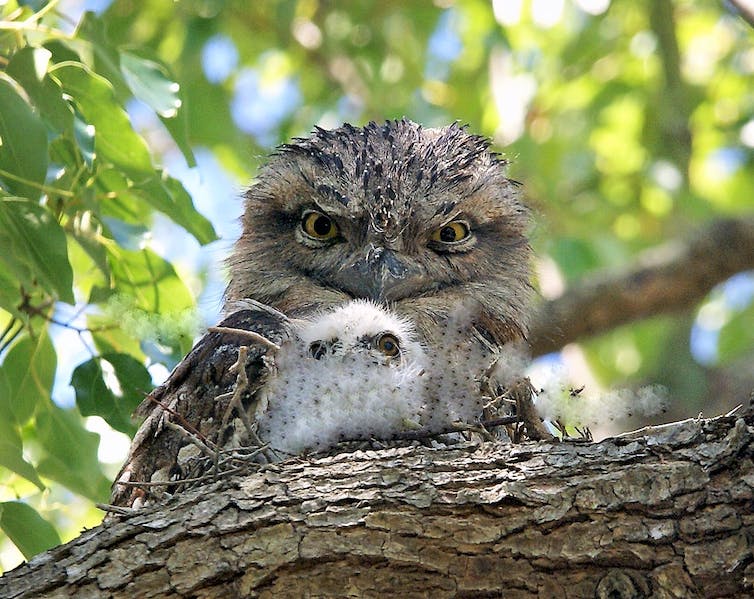 You might have been lucky enough to see a tawny frogmouth chick recently. Carol Smith, Author provided

Read more: What Australian birds can teach us about choosing a partner and making it last

1. They are excellent parents

Tawny frogmouths are excellent parents. Both males and females share in building the nest and incubating the eggs, generally one to three. The eggs take 30 days to hatch, with the male incubating during the day and both sexes taking turns during the night.

Once hatched, both parents are very involved in feeding the fledglings. A young bird’s wings take about 25 to 35 days to develop enough strength for flight (a process known as “fledging”).

2. They mate for life

Tawny frogmouths pair for life. Breeding pairs spend a great deal of time roosting together and the male often gently strokes the female with his beak. Some researchers report seeing tawny frogmouths appear to “grieve” when their partner dies.

For example, renowned bird behaviour expert Gisela Kaplan tells of rearing a male tawny frogmouth on her property then releasing it to the wild. It found a female mate and raised nestlings. One day, the female was run over on the highway; Kaplan recognised its markings.

She found the male “whimpering” on a nearby post. Kaplan reportedly said: “It sounds like a baby crying. It affects you to listen to it.” According to Kaplan, the male stayed there for four days and nights, and did not eat or drink. 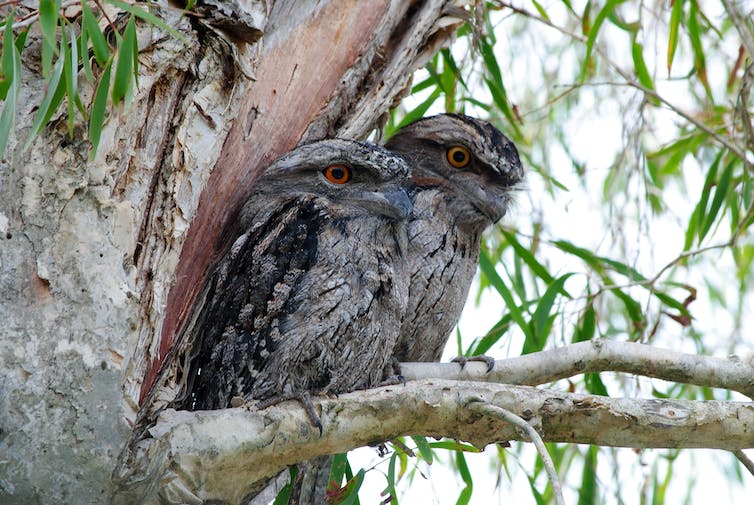 Although tawny frogmouths are often referred to as owls, they are not. But they do resemble owls with their large eyes, soft plumage and camouflage patterns, because both owls and frogmouths hunt at night. This phenomenon (where two species develop the same attributes, despite not being closely related) is called “convergent evolution”.

Unlike owls, tawny frogmouths do not have powerful feet and talons with which to capture prey. Instead, they prefer to catch prey with their beaks. Their soft, wide, forward-facing beaks are designed for catching insects. They will also feed on small birds, mammals and reptiles.

4. They are masters of disguise

Tawny frogmouths are extremely well camouflaged and when staying statue-still on a tree branch they appear to be part of the tree itself. They often choose to perch near a broken tree branch and thrust their head at angle, further mimicking a tree branch. 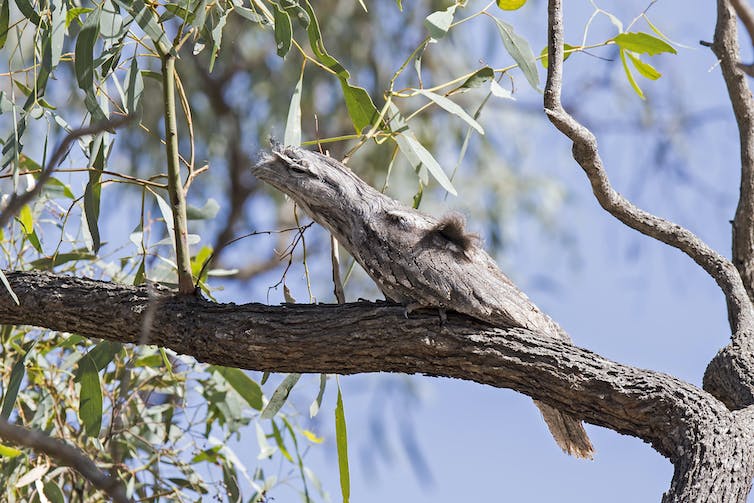 Tawny frogmouths are extremely well camouflaged and when staying statue-still on a tree branch they appear to be part of the tree itself. Shutterstock

Tawny frogmouths are quite vocal at night and have a range of calls from deep grunting to soft “wooing”. When threatened, they make a loud hissing sound. Their vocalisations have also variously been described as purring, screaming and crying.

6. They can survive extremes

In colder regions of Australia, tawny frogmouths are able to survive the winter months by going into torpor for a few hours. In this state, an animal slows its heart rate and metabolism and lowers its body temperature to conserve energy.

On very hot summer days tawny frogmouths will produce mucus in their mouths which cools the air they breathe in, thereby cooling their whole body.

It’s not that uncommon to see tawny frogmouths dead on the road; they often flit across the road chasing insects at night and can be hit by cars.

Tawny frogmouth populations are holding relatively steady, but there is a shortage of old trees for nesting. They especially like trees with old branches as they mimic old branches and stick out like sore thumbs on young branches.

When one NSW council chopped down a suburban tree that a tawny frogmouth pair had reportedly used for years as a nesting site, one of the birds was photographed sitting on a nearby woodchipper — a poignant image.

8. They’re not good at building nests.

Tawny frogmouths are pretty slack when it comes to nest building. They simply dump twigs and leaves in a pile and that is it. Chicks and eggs have even fallen out of the nest when parents are swapping brooding duties. 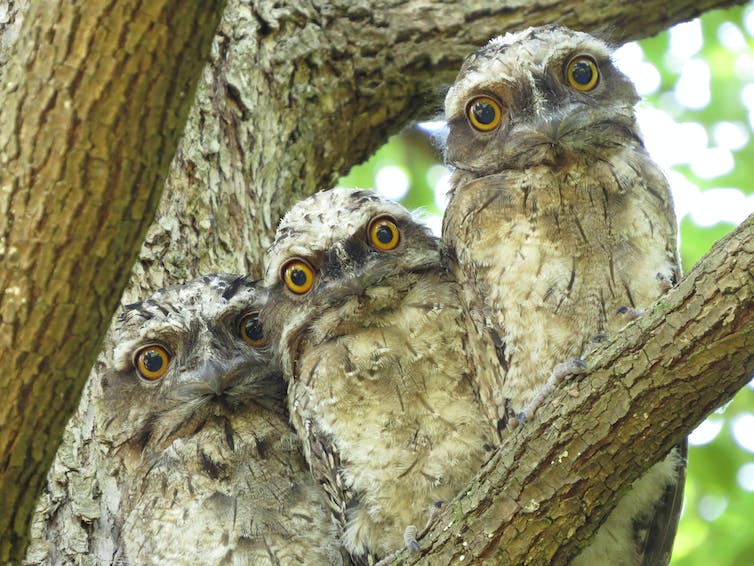 Read more: Laughs, cries and deception: birds' emotional lives are just as complicated as ours