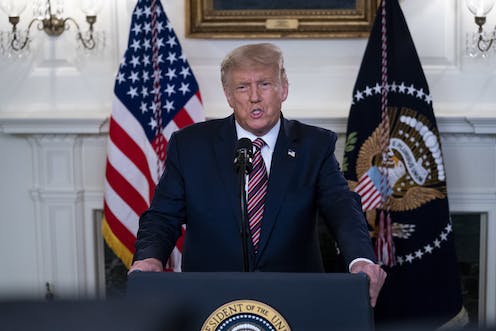 News that US President Donald Trump was fully seized of the deadly potential of the novel coronavirus, despite his sustained public dismissals, has provoked anger and surprise.

Audio recordings from interviews granted to veteran reporter Bob Woodward expose a clear disconnect between the president’s many public utterances, dating back to January, and those he made to Woodward intended for reporting at a later time.

“You just breathe the air and that’s how it’s passed,” Trump said in a February 7 interview with The Washington Post’s associate editor, before the US experienced its first confirmed coronavirus-related death. “And so that’s a very tricky one. That’s a very delicate one. It’s also more deadly than even your strenuous flus,” he continued. “This is deadly stuff.”

The president’s clarity came ten days after he had received dire warnings from his health and national security advisers to the effect that the world faced a health crisis not seen since the so-called Spanish flu of 1918-19.

Then, speaking to Woodward again on March 19, Trump explained his thinking had been deliberately calculated to “play it down”.

I still like playing it down, because I don’t want to create a panic.

That this president is strategic to the point of deceit will come as no surprise to his critics within America and beyond.

But some may be surprised to learn that, contrary to his ill-informed ramblings about COVID-19 simply disappearing, or being treatable with bright lights and injections of disinfectant, Trump actually did comprehend the medical advice regarding the virus well before it tore a deadly swathe through the American population and overwhelmed its hospitals.

Yet still he did little to co-ordinate a national response. He continued to undermine the kind of public awareness required to drive social distancing.

Whether Trump’s justification of avoiding public panic is the whole truth is itself questionable. It seems more likely that heading into an election year, with the strong US economy as his singular advantage, the president was simply unwilling to brook the economic damage required to fight the virus.

In any event, with the US death toll now expected to surpass 200,000, the decision to deceive Americans in order to limit public harm seems absurd.

Yet governments and their officials have often considered the dangers of public overreaction when disseminating emergency advice.

Sometimes this is because an uncontrolled public clamour would create a secondary crisis, and sometimes because public panic is itself the problem.

In 1974, South Australian Labor Premier Don Dunstan grabbed a loudhailer to address an anxious throng of Hindmarsh Building Society depositors. He assured them their savings were safe, the institution was solvent and it was underwritten by the state treasury.

In October 2008, the Rudd government carefully calibrated its public utterances to avoid causing a run on financial institutions, while nonetheless announcing deposit guarantees for some A$2 trillion in deposits and becoming guarantor for the wholesale funding requirements of Australian banks amid the gathering GFC storm.

Later, it emerged Kevin Rudd and his ministers were getting real-time information suggesting several banks were experiencing abnormal withdrawals, with Suncorp weathering a massive uptick pushing it close to insolvency. It was reported that one business figure allegedly withdrew A$3 million and was taking it across town in a suitcase.

Needless to say, these graphic details were withheld, demonstrably in the interests of financial sector stability and, by extension, the greater public interest.

In that case, fear itself was the contagion.

Yet the emergent COVID-19 pandemic presented precisely the opposite problem. Fear or, less dramatically, public awareness offered the solution.

Health authorities quickly realised that the highest possible level of public observance via enhanced personal hygiene practices presented the only realistic hope of containing the pandemic.

The Commonwealth response was slower and more reluctant – notwithstanding that, by international standards, it appeared relatively front-footed.

The then chief medical officer, Brendan Murphy, also questioned disruptive measures with border and school closures criticised. Face masks were questioned, too, with the federal government insisting they offered no protection outside health-care settings and were, in any event, unnecessary. On March 9, Murphy told ABC Radio’s Ali Moore:

Well, certainly wearing a mask walking down the streets of Melbourne makes no sense at all because there’s no evidence of community transmission generally […] I’m certainly very opposed to people wearing them in the general community.

Yet increased public awareness came with costs too. Australia garnered international headlines for its run on toilet paper and other essentials, with supermarkets stripped of products, shoppers squabbling and retail staff abused for shortages or store-imposed item limits.

The lesson is that full transparency should be the default position of governments. But there can be an exception when fear itself is the central problem, and when publicly expanding on it would only deepen the crisis.

Read more: Grattan on Friday: Which leaders and health experts will be on the right side of history on COVID-19 policy?