Unlike many mammals and birds, most reptiles show little sign of being caring parents. But our new research shows one lizard species may be more doting parents than we thought – the adults risking their own safety to protect their babies.

We used cameras in the Snowy Mountains of New South Wales to study the Cunningham’s skink. We were surprised to record evidence of the lizards actively defending their newborn offspring against formidable predators. Our findings are outlined in a paper released today.

Most startlingly, we recorded a mother skink aggressively attacking a large, deadly brown snake while her babies watched on. We also witnessed 12 incidents of skinks chasing magpies away from their young.

We originally set out to record how species such as skinks will cope with climate change. But this evolved into a study of the fascinating and surprising social bonds between lizard offspring and their parents. 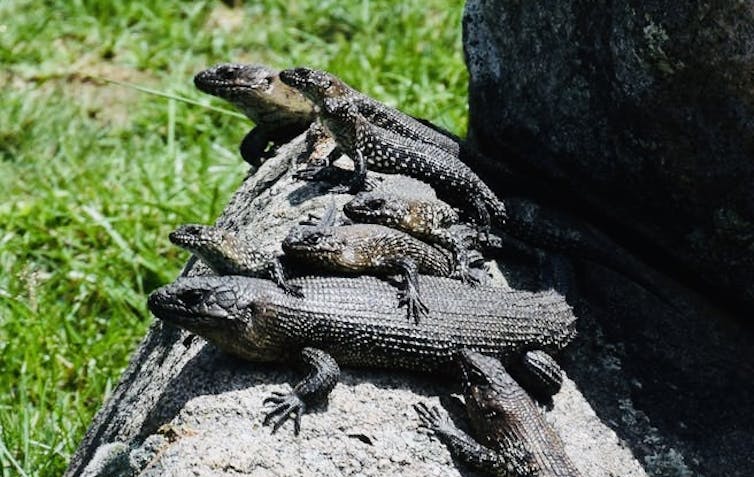 What is the Cunningham’s skink?

The Cunningham’s skink (Egernia cunninghami) is a large, sun-loving, spiny lizard native to southeast Australia. It’s named after Alan Cunningham, an explorer who collected the first specimen in the Blue Mountains.

The skinks are active during the day. They feed on invertebrates such as insects, snails and slugs, as well as vegetation.

The Cunningham’s skink lives in social groups – a behaviour very rare among lizards and reptiles. In these groups, mothers give birth to live young (rather than eggs) then live alongside their kids, sometimes for several years.

The species has strength in numbers – living in a group makes it easier to spot threats, which helps the group survive. 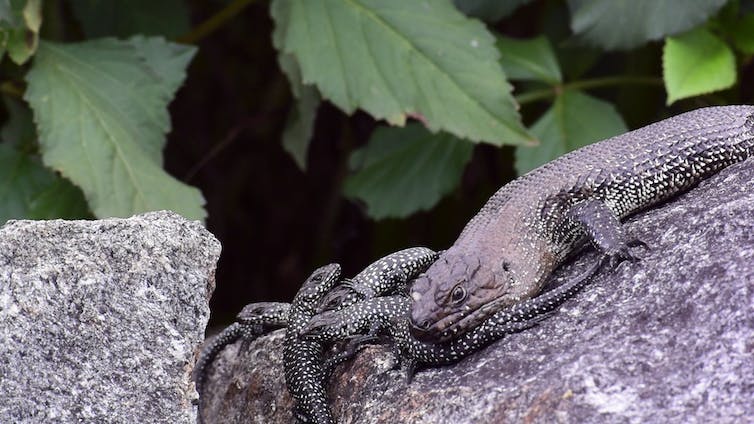 Thew offspring of Cunningham’s skinks can stay with the parents for several years.

The mother of all discoveries

Using video and thermal imaging, we observed the skinks on 32 days over three years.

Among reptiles, evidence of parental protection in their natural environment has been rare and typically anecdotal. We witnessed four birthing sessions, and then monitored skink encounters in the presence of their offspring.

Read more: New research reveals these 20 Australian reptiles are set to disappear by 2040

Videoing nature can be tricky. Often, the action takes place away from where you’ve directed your camera. So when we saw a snake, it was a scramble to get a free video camera and start recording.

We witnessed two separate encounters with an eastern brown snake. The first involved the snake sneaking up on six-day-old skinks basking in the sun (see footage below). We recorded the mother running towards the predator and biting it for several seconds. The snake writhes around before the mother releases her grip and returns unharmed to her young.

The following year, we encountered two adult skinks attacking another eastern brown snake in bushes. Juvenile skinks were nearby. The skinks bit tight to the snake’s body, and the snake dragged them for more than 15 metres before the skinks released their grip.

Snakes were not the only predator vanquished by the protective skink parents – Cunningham’s skinks regularly chased magpies away from their young. We observed 12 encounters between skinks and magpies. In each case, an adult skink aggressively chased and/or attacked the magpie after the bird came close to the group. 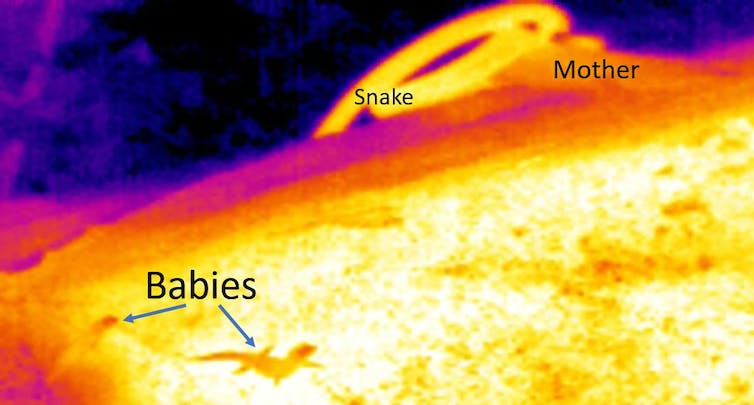 Thermal camera image showing the mother skink attacking the snake while her babies watch on.

What does this all mean?

We saw no such behaviour among the Cunningham’s skink, or aggression towards each other.

While the aggression of the adult skinks towards predators took place in the presence of young, the adults may have been exhibiting self-defence or territorial behaviour. Regardless, the attacks on predators in the presence of newborns does reflect parental care, either directly or indirectly. Our future field excursions will hopefully shed more light on this.

Understanding the factors that bring parents and offspring together, and keep them together, is important in our broader understanding of social evolution – that is, how social interactions of species arise, change and are maintained.

It will also help us understand how animals cooperating with and caring for each other can benefit both the individual, and the whole.

Read more: A few months ago, science gave this rare lizard a name – and it may already be headed for extinction