We tend to assume disseminating public health messages is solely the role of public servants such as Victorian chief medical officer Brett Sutton and his former federal counterpart Brendan Murphy, both of whom have become de facto celebrities during the pandemic.

But to ensure vital health information reaches everyone in our community, we need a range of spokespeople, including religious and community leaders.

However, church leaders have expressed concerns some Christians may face an “ethical dilemma” over Australia’s COVID-19 vaccination plans.

Sydney’s Catholic and Anglican Archbishops and the leader of Australia’s Greek Orthodox church told Prime Minister Scott Morrison that the University of Oxford’s candidate vaccine, set to be given to Australians if it proves successful, is potentially problematic because its production method relies on cell lines from an electively aborted foetus.

There are many examples of religious community leaders helping vaccination programs. I experienced this first-hand in 2013, when I supported a catch-up immunisation clinic at a large Samoan church in Western Sydney, which aimed to reduce the measles risk among the Pacific Islander community. One community member who participated told me:

Most Pacific island people go to church. Maybe this is one of the best channels to go through. Ministers, because their job is spiritual health as well, will give out information for the health of their people.

That was the first time an Australian church had hosted an immunisation clinic. But the idea of religion crossing over with immunisation is not new. The earliest recorded example of “variolation” (or inoculation) was an 11th-century Buddhist nun’s innovative practice:

She ground scabs taken from a person infected with smallpox (variola) into a powder, and then blew it into the nostrils of a non-immune person to induce immunity.

Several centuries on, things are more vexed. While major faith traditions endorse the principles supporting the public health goals of vaccination, hesitancy has been documented at an individual clergy level, and concerns have been raised at an organisation level from time to time.

The church leaders who wrote to Morrison have asked the government not to pressure Australians to use the vaccine if it goes against their religious or moral beliefs. Sydney’s Catholic Archbishop Anthony Fisher called on the government to pursue arrangements for alternative vaccines that do not involve the foetus-derived cell lines.

A cell line is a population of cells that is grown continuously in the laboratory for extended periods. Once established, cell lines have an unlimited lifespan and so are a renewable and reliable system for growing viruses.

These abortions were not done for the purpose of harvesting the cells. Cells taken from these cell lines are used to grow the virus, but are then discarded and not included in the vaccine formulation.

In Australia, several licensed vaccines have been manufactured using cell lines that originally came from this foetal tissue from the 1960s. This includes the vaccines against rubella, hepatitis A, varicella (chickenpox), and rabies. 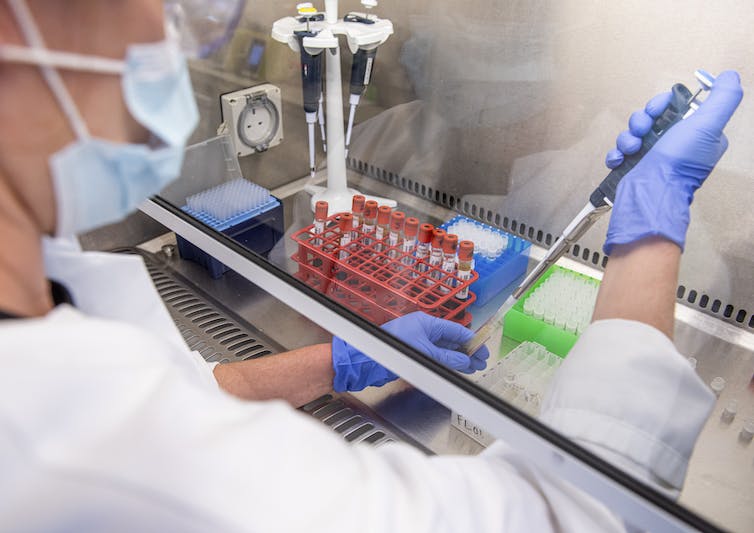 The University of Oxford’s COVID-19 vaccine is made using human cells derived from abortions carried out in the 1960s. John Cairns/AP

The Catholic church has previously grappled with this issue. In the late 1990s and early 2000s, ethicists at the National Catholic Bioethics Center and the Vatican’s Pontifical Academy for Life declared the abortions from which the cell lines were derived were events that occurred in the past. Most importantly, they acknowledged the intent of the abortions was not to produce the cell lines, and therefore being immunised is a morally separate event from the abortions themselves.

In 2017, the Pontifical Academy for Life reiterated this stance, stating:

…we believe that all clinically recommended vaccinations can be used with a clear conscience and that the use of such vaccines does not signify some sort of cooperation with voluntary abortion.

Moreover, it concluded there is a “moral responsibility to vaccinate […] to avoid serious health risks for children and the general population”.

Supporting public health goals is the key principle previously applied by major faith institutions in situations where ethical issues around vaccination have been raised. One previous example is the use of gelatin – which is made from pig skin or bones and is forbidden as a food by some religions – in vaccine and medicine capsules.

After reflecting on the issue, the Kuwait-based Islamic Organization for Medical Sciences declared in 1995:

…the gelatin formed as a result of the transformation of the bones, skin and tendons of a judicially impure animal is pure, and it is judicially permissible to eat it.

The Grand Mufti of Australia released a letter in 2013 supporting this judgement, ruling it is acceptable for Australian Muslims to take vaccines containing pork-derived gelatin.

In the case of both gelatin and human cell lines, religious organisations have called on vaccine manufacturers to use alternative methods where possible. Yet given the urgency of the COVID-19 pandemic, it may not be feasible or ethical to delay or seek alternative vaccines.

This sentiment was outlined by Reverend Kevin McGovern, a Catholic priest and adjunct lecturer at the Australian Catholic University and the Catholic Theological College, in a recent piece for the ABC:

Developing ethically uncompromised cell lines and vaccines is important. In the crisis of this pandemic, developing and using an effective vaccine so as to save lives is even more important.

While this article is reflecting on religious organisations and vaccination, at an individual level it’s important to note that people who profess to decline vaccines for religious reasons may in fact be motivated not by theological concerns but by their own personal views about vaccine safety, perhaps influenced and echoed by others in their clustered social networks.

For example, US based studies have suggested some parents circumvent vaccine requirements by claiming religious exemptions, in the absence of a personal belief alternative.

Read more: 5 ways we can prepare the public to accept a COVID-19 vaccine (saying it will be 'mandatory' isn't one)

To move forward, it’s important public health officials work with religious leaders to ensure they are equipped with accurate information about the potential COVID-19 vaccine, its development process and the rationale for its use. Engaging these leaders and building trust are crucial steps into the intersection of religion and vaccination.