How did the first person evolve? Mabel, age 7, Anglesea, Victoria.

Hi Mabel, what a great question!

We know humans haven’t always been around. After all, we wouldn’t have survived alongside meat-eating dinosaurs like Tyrannosaurus rex.

How the first person came about – and who their ancestors were (their grandparents, great-grandparents and so on) – is one of the biggest questions archaeologists have. Even today, it puzzles us.

When all living things were tiny

When we think of how humans first came about, we have to first understand that almost every living thing evolved from something else through the process of evolution.

For instance, the first known example of life on Earth dates back more than 3.5 billion years.

Read more: A 3.5-billion year old Pilbara find is not the oldest fossil: so what is it?

This early life would have been in the form of tiny microbes (too small to see with just our eyes) that lived underwater in a very different world to today. At that time, the continents were still forming and there was no oxygen in the air.

Since then, life on Earth has changed incredibly and taken many forms.

In fact, for about a billion years during the middle part of Earth’s history (1.8 billion to 800 million years ago), life on Earth was nothing more than a large layer of slime.

However, we have a long line of family members called hominins who came before us – including our ancient human relative, the Neanderthal (Homo neanderthalensis).

Homo sapiens are the only hominin alive today. 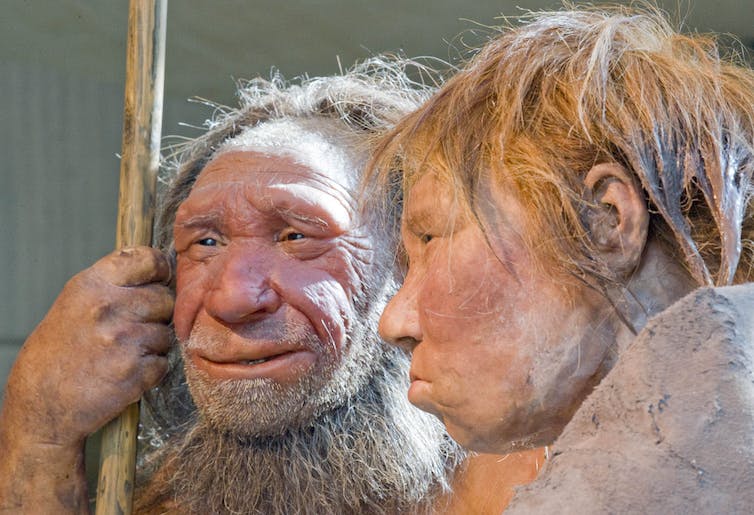 These two sculptures are imaginings of what a neanderthal man and woman may have looked like. Neanderthals are extinct today but were also hominins. Martin Meissner/AP

Hominins first showed up millions of years ago, and changed in mostly small ways over a long time, through evolution.

Because of this complicated family tree, in answering your question we need to think about what you mean by “person”.

This may seem silly, because we know straight away when we pass someone on the street that they’re a person, rather than a dog or cat.

So I’m going to give you two answers and let you decide which you think is right.

You and I are Homo sapiens

The first answer is to assume the first “person” was the first member of our species, Homo sapiens. This person would have been just like you and me, but without an iPhone!

The oldest skeleton discovered of our species Homo sapiens (so far) is from Morocco and is about 300,000 years old.

This ancestor of ours would have lived at the same time as other members of the human family, including Neanderthals and Denisovans. Archaeologists have long argued about what makes us different to these other ancient types of humans.

Read more: How we discovered that Neanderthals could make art

The answer probably lies in our brains. We think Homo sapiens are the only species that can do things like create art and language – although some recent discoveries suggest Neanderthals were artists too.

It’s hard to know why Homo sapiens survived and the rest of our hominin family didn’t. But there’s a good chance the creativity that led to some wonderful early cave paintings found in France and Indonesia helped us to succeed over the last 100,000 years. 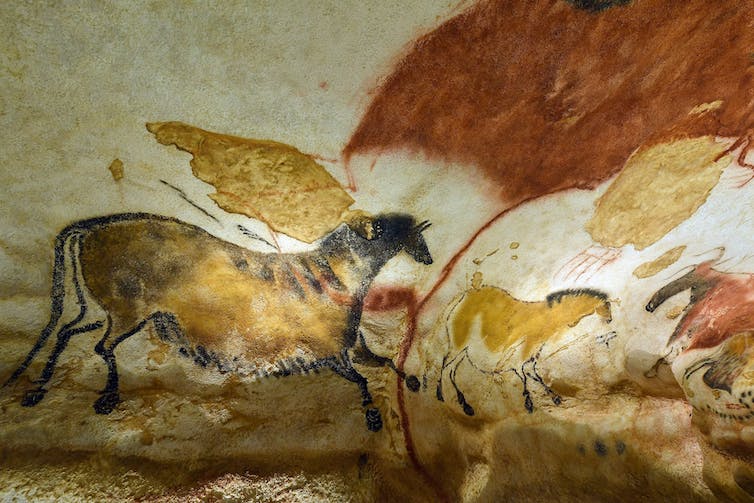 This is a copy of an ancient cave painting from the Lascaux cave in France. Caroline Blumberg/EPA

Another way to answer your question is by assuming the first “person” was the first hominin to split off from the rest of our extended family, which includes chimpanzees and gorillas.

We can’t be sure exactly who our first ancestor was, but many scientists think Australopithecus afarensis is a good bet.

This species would have looked different to you and me, but still would have walked upright and used tools made of stone. The best example of this is a famous fossil skeleton called Lucy. 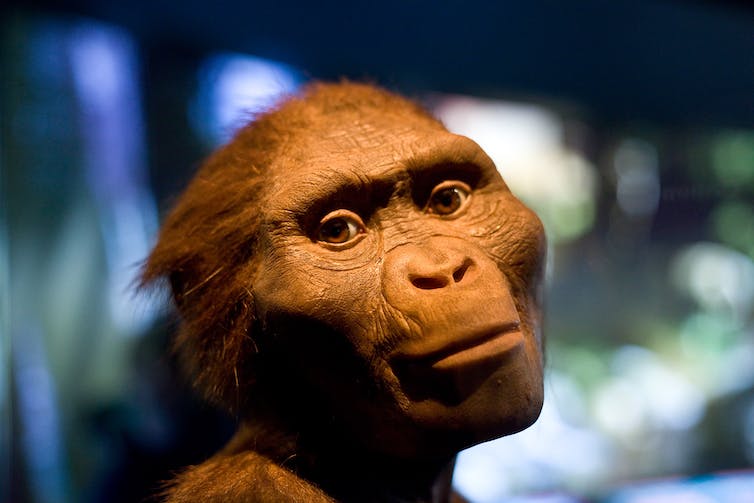 What Lucy may have looked like when she was alive more than three million years ago. Jason Kuffer/Flickr, CC BY-NC-ND 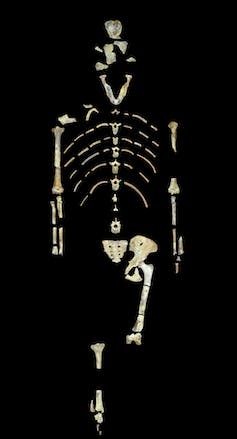 We don’t have Lucy’s complete skeleton. Her fossils were found in Ethiopia. Marsha Miller/AP

When Lucy was alive about 3.18 million years ago she was covered in hair. And she was probably about the same height as you are now, even though her bones tell us she was an adult when she died.

Her skeleton was found in Africa, and while we have a lot of it compared to other ancient hominin skeletons, it’s not complete. This makes it hard to work out who the first “person” was.

Most fossils from Lucy’s time are incomplete, and we only have a handful of bones to study from each extinct species.

This is why every new discovery in archaeology is so exciting. Each new fossil gives us a new chance to put the puzzle of our family tree together.