My analysis of secondary school textbooks shows this behaviour isn’t restricted to the past — it is ongoing.

In Australia, pre-invasion Aboriginal peoples tend to be portrayed as nomadic hunter-gatherers. For example, a 1979 textbook titled Australia’s frontiers: an atlas of Australian history by J.R.J. Grigsby and T.F. Gurry said:

The people of this distinctive race were hunters and gatherers […] They were constantly on the move, following game or seeking new sources of plant food.

However, physical evidence as well as the journals of early colonists show Aboriginal peoples farmed and built large villages, meaning many groups stayed in one place.

In the 1970s, evidence of Aboriginal farming in southwest Victoria recorded by white archaeologists confirmed what the local Gunditjmara people had always known: rather than living off whatever they came across, the Gunditjmara actively farmed the landscape. As in other areas in the world, intensive farming was accompanied by permanent dwellings.

Read more: The biggest estate on earth: how Aborigines made Australia

As I read these early journals I came across repeated references to people building dams and wells, planting, irrigating and harvesting seed, preserving the surplus and storing it in houses, sheds or secure vessels, creating elaborate cemeteries and manipulating the landscape – none of which fitted the definition of hunter-gatherers.

What are school children taught?

I analysed Australian history narratives in secondary school textbooks from 1950 to the present. Up until the 2000s, these textbooks repeated the myth that Aboriginal peoples were nomadic hunter-gatherers. For example, a 1984 text said:

The Aborigines were nomads or wanderers. The wandered from place to place as they searched for food and water. But each tribe has its own special territory and members of the tribe did not move outside this area […] The Aborigines knew the places where they would be most likely to find water and things to eat and they visited each place in turn […] The Aborigines did not farm the land. They didn’t plant and harvest crops or herd animals.

Although factually incorrect, it’s likely the authors of these accounts believed them to be accurate.

Over time, the textbooks I studied gradually improved as various errors and omissions were corrected. However, it took until the early 2000s before the myth of hunter-gathering was corrected. In 2005, one text for middle school students openly refuted the traditional narrative:

It has generally long been accepted that Australia’s Indigenous people were traditionally all nomadic […] Archaeological evidence recently discovered in Victoria seems to suggest, however, that at least some Indigenous people might have had fixed settlements. 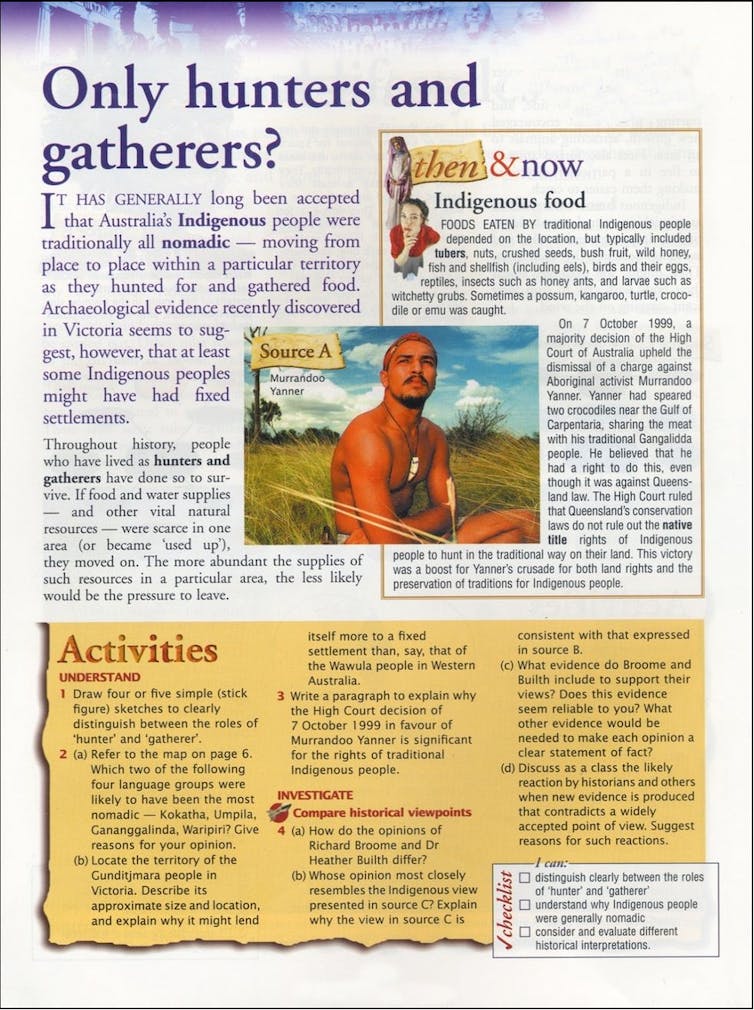 This change seems to reflect the impetus to correct misinformation. Remarkably however, this change was short-lived. The publisher reverted to the traditional narrative of Aborigines as hunter-gatherers the very next year. This is the only example I found where textbooks reverted to a previous account that was known to be incorrect. The publisher’s comparable 2006 text stated:

Collecting food and the natural resources needed to provide shelter and weapons typically took up most of the day […] Indigenous people took only the resources they needed to live. When a particular territory became too pressured by over-use, the people moved camp, allowing landscapes and resource stocks to be restored.

This pattern continued in subsequent years. For example, the same publisher’s 2012 textbook claimed:

The arrival of the British began the process that saw the Gadigal lose their lands and their self-sufficient, hunting and gathering way of life.

The most recent textbooks omit this topic entirely, which means the widely-held myth of hunter-gatherering persists.

Why aren’t our kids taught about Aboriginal farming?

In Dark Emu, Pascoe explains that denying Aboriginal farming practices enabled the colonisers to reject Aboriginal peoples’ rights to land, shoring up their own claims to legitimacy instead. The invasion and colonisation of Australia was based on the self-justifying legal doctrine terra nullius — land belonging to no one. A key aspect of this claim was that Aboriginal peoples supposedly didn’t farm.

European political thinking in the 1800s linked “industriousness” with rights to land. For example, in 1758, Swiss jurist Emmerich de Vattel argued societies based on the “fruits of the chase” (rather than agricultural production) “may not complain if more industrious Nations should come and occupy part of their lands”.

This line of thought allowed the British colonists to reassure themselves the continent was there for the taking and justify their dispossession of Aboriginal peoples.

It’s difficult to understand why a contemporary publisher of school textbooks would publish misleading or incorrect material. However, we do know changes to secondary school history textbooks have occurred in the context of the “history wars” in Australia.

The “history wars” refers to the conservative backlash to the increasing democratisation of Australian history.

From the 1970s, complexity was introduced to Australian histories. The traditional tale of heroic, elite, white men was moderated by including the perspectives and voices of Aboriginal peoples, non-white immigrants and white women and workers. The “history wars” is an attempt to marginalise these voices and return to traditional narratives.

Read more: 'Western civilisation'? History teaching has moved on, and so should those who champion it

History textbooks are crucial to students’ understanding of our nation. In colonised nations such as Australia, foundational narratives are fashioned to establish the legitimacy of the nation. In Australia, it seems as if this fashioning requires Aboriginal peoples to be portrayed as hunter-gatherers.

Read more: Why our kids should learn Aboriginal history