The Democratic National Convention is approaching — in virtual form — and Democratic presidential nominee Joe Biden will present his pick for vice president to the delegates for their affirmation.

In 2008, then-Senator Barack Obama announced his selection of Biden via text message — a first in American politics — in late August, just two days before the Democrats met in Denver. This created a sense of excitement and unity ahead of the convention.

But this cannot be repeated in our COVID-19 world: there will be no packed arena in Milwaukee, site of this year’s convention, awaiting the duo when the official business is done from August 17-20.

We may see an earlier announcement, with the team taking to the road for some controlled events with smaller live audiences. This suggests an announcement by Biden any day from August 1.

The important thing is to get it right. We know it will be a woman, an announcement Biden made in March as soon as it was clear he would be the nominee.

The question is: in a crowded field of female candidates, which one will Biden choose? 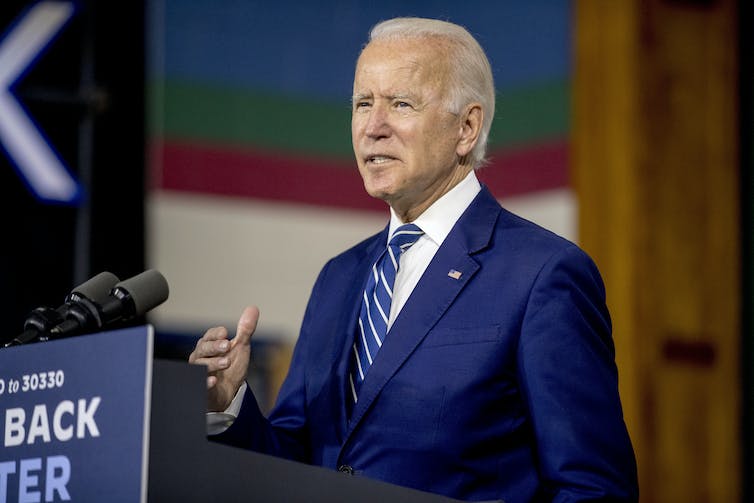 Biden has pledged to name a woman as his VP pick, which is expected in the coming weeks. Andrew Harnik/AP

Do geography and demographics matter?

Ever since then-Democratic nominee John F. Kennedy chose Senator Lyndon Johnson of Texas to be his vice president in 1960, potential candidates are assessed as to which voters they will deliver to the “ticket”. Johnson, for instance, helped the ticket carry Texas (his home state) and several other Southern states, guaranteeing Kennedy would win.

While that history suggests Biden should pick Gretchen Whitmer, the popular governor of Michigan, to ensure he takes back one of three industrial states Donald Trump carried in 2016 (Pennsylvania and Wisconsin are the others), this is not Biden’s strategy.

Biden also intends to win the presidency with the same game plan he used to seal the Democratic nomination on Super Tuesday: rely on his champions in each of the key battleground states — Whitmer in Michigan, senators Tammy Baldwin in Wisconsin and Amy Klobuchar in Minnesota, Governor Tom Wolff and Senator Bob Casey in Pennsylvania, Stacey Abrams in Georgia, Mark Kelly, the Democratic Senate candidate in Arizona and the House congressional delegations in Texas, Florida and elsewhere.

In other words, if Biden wins, it will be from the ground up.

If not electoral geography, then demography is critical: a selection that maximises turnout on your side.

In 2016, Trump made a very smart decision in choosing then-Governor Mike Pence of Indiana, whose deep ties to evangelical Christians sent the clearest message that their agenda — especially on social issues — would be protected by a Trump presidency, notwithstanding the clear moral failures that haunted Trump’s candidacy.

For the Democrats, black turnout in 2016 was down significantly, and Hispanic voting was static. And that proved fatal. 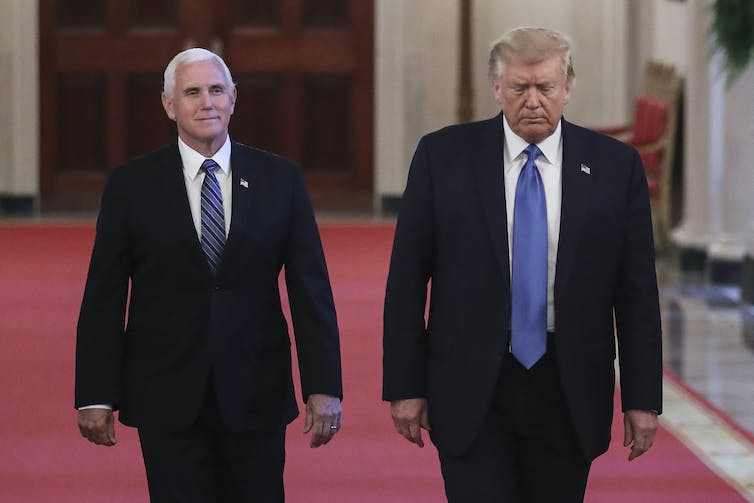 So, what will drive Biden’s decision?

First, the ability of the VP to assume the presidency. Biden is perfectly aware that if elected he will, at 78, be the oldest person to take the office. It also means his choice has strong prospects for becoming president in her own right should Biden not run for re-election.

It is therefore imperative his pick be fully qualified and capable to step in as president – and is seen as such by the American people from the very first moment of her announcement. This is where then then-governor of Alaska, Sarah Palin, was such a failure for Republican nominee John McCain in 2008. 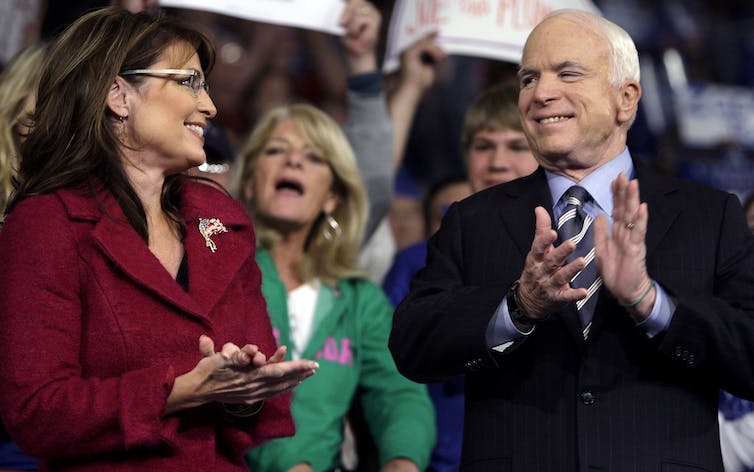 Second, doing the job. In Biden’s lifetime, the vice presidency has been transformed. Starting with Walter Mondale under Jimmy Carter, and then Al Gore under Bill Clinton and Dick Cheney under George W. Bush, VPs have become true partners in governance, with real power and responsibility.

That is what Biden was under Obama, and that is how he wants to treat his vice president: a senior counsellor at the most pivotal moments.

Third, trust. Biden has to feel the same intensity that marked his bond with Obama over their eight years together. So, a woman who is absolutely qualified and star-studded won’t get the nod if Biden feels they cannot do great things together through shared conviction and trust.

Indeed, the choices of Gore (by Clinton), Cheney (by Bush) and Biden (by Obama) shows the benefit of selecting a VP who complements the presidential nominee, either by expanding that candidate’s footprint (Cheney and Biden on foreign policy) or reinforcing a virtue for added effect (Gore as a Southern political centrist).

Read more: Third time's the charm for Joe Biden: now he has an election to win and a country to save

Fourth, this year, more than any other given the upheaval in American society on issues of racial justice, there is a profound understanding this time is different — a moment of reckoning in the US. It is a time to take another step toward forming a more perfect union.

The surprise in recent polling data is a majority of Americans believe the country has serious racial issues and it is time to address them more forcefully.

This strongly suggests, together with the need to secure decisive gains in black turnout in November, that Biden will turn to a woman of colour. This would make the most demonstrative signal about the choices he wants to make for the country and its future course.

But each of them could make a powerful statement in a Biden cabinet, too. Think Warren at Treasury, Rice at the State Department, Duckworth at defence, Demings as attorney-general.

I believe Biden will go with the strongest overall choice: Senator Kamala Harris of California. She has instant national credentials.

While Harris is not considered on par with Obama in terms of driving black voter support, the fact is that if she is selected, appreciation of the reality of her ascension and her potential future and what that means will translate into genuine enthusiasm in November.

As Harris showed in the Democratic primary debates, and especially in the Senate, she is exceptionally effective in attacking Trump. As a VP nominee, she would be the physical embodiment of the anti-Trump attack ads that are so devastating. And that would permit Biden to ride higher with his “unite the country” theme. 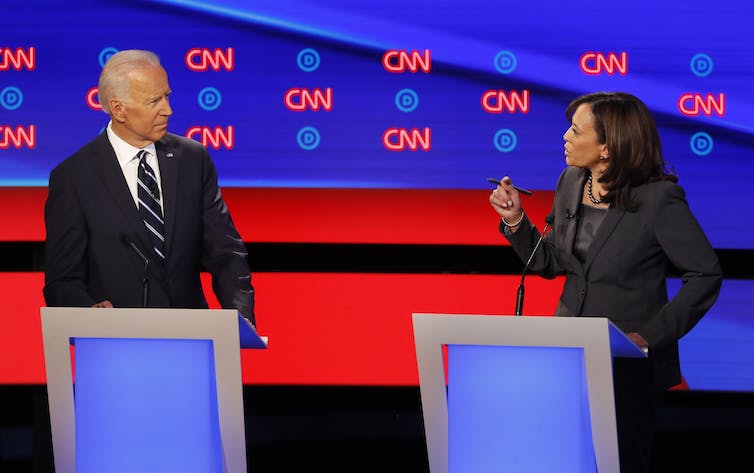 Harris and Biden memorably clashed during the Democratic primary debates, but she has since endorsed his candidacy. Paul Sancya/AP

In the debates, Harris attacked Biden’s record on civil rights, and specifically his stand on bussing and school integration — and stung him badly.

So, who better than Harris to show the kind of man he is, and keep him honest on race, which is absolutely critical in sealing the deal on that issue with the party and the country.

The only question about Harris is if the personal chemistry is not there to Biden’s satisfaction. That chemistry is crucial if the VP is to be consequential — and Biden will not hesitate to go with another choice if their discussions leave him in doubt on who he wants to be in the room where it all happens.

Choosing a vice president is the first “presidential” decision Biden will make in his campaign. It will say a lot about him and his presidency if he wins.

Could Biden still slip up?

The polls are showing Biden is a strong front-runner, with a double-digit lead nationally. The view of many political experts is that Trump has lost the election already.

Read more: Leaders like Trump fail if they cannot speak the truth and earn trust

Aside from everyone being wrong — as most pundits, including myself, were in 2016 — what could really upend Biden before November? There are a few possible scenarios: 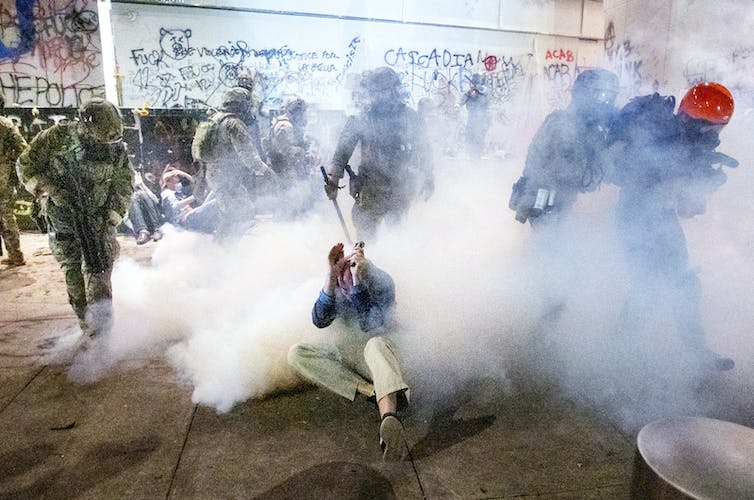 Trump has sent federal officers to cities like Portland and portrayed Democratic leaders as weak on ‘law and order’. Noah Berger/AP

And what own goals from the Biden campaign to watch for?

So yes, no Biden victory is assured.

Bur first things first. A VP to choose — and try to win with.