A “dark fleet” of hundreds of Chinese fishing vessels has illegally caught more than half a billion dollars worth of squid in North Korean waters since 2017, according to new research that used satellite technology, on-water observations and machine learning to track the unreported vessels. The illegal catch may have driven small North Korean fishing boats into dangerous waters and contributed to the sharp decline of the Japanese flying squid.

Illegal, unreported, and unregulated fishing is a global problem. It threatens fish stocks, marine ecosystems, and the livelihoods and food security of legitimate fishing communities worldwide. This kind of fishing is hard for governments to address, as it is often carried out by “dark fleets” of vessels that do not appear in public monitoring systems.

However, working with a team from Korea, Japan, Australia and the US, we’ve devised a new approach to tracking clandestine fishing. We used it to identify more than 900 vessels originating from China that fished illegally in North Korean waters in 2017, and more than 700 in 2018. The research is published today in Science Advances. 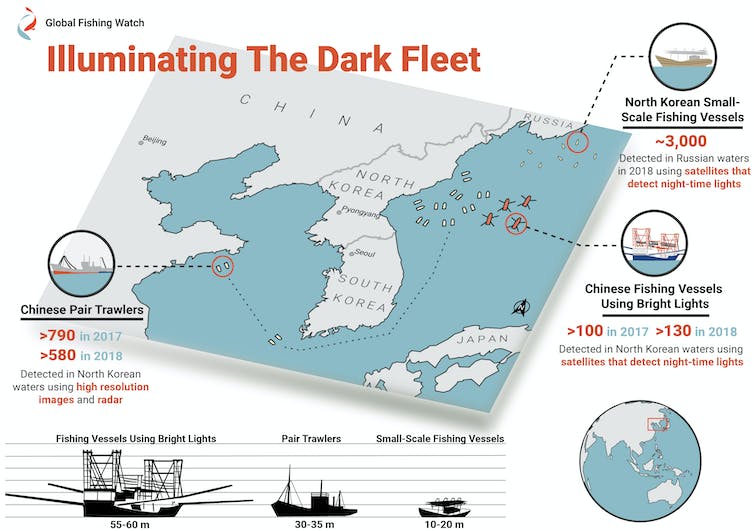 Read more: Tighter sanctions on North Korea could have a harsh humanitarian impact

Because of the sanctions, Chinese vessels fishing in North Korea after September 2017 would constitute a violation of either or both international and domestic law. Nevertheless, the South Korean Coast Guard identified hundreds of vessels of Chinese origin passing through their waters en route to North Korean fishing grounds.

Additionally, the Chinese fishing activity has displaced smaller North Korean fishing boats, many of which have been driven into illegal fishing in neighbouring Russian waters. These vessels lack the equipment or endurance for these distant and dangerous waters. Japanese coastal communities have reported hundreds of such vessels drifting ashore as “ghost boats”, empty or carrying only human remains. 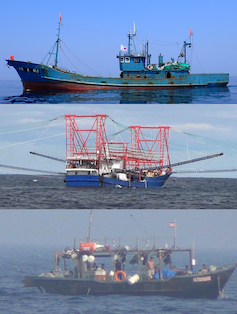 Lighting up the dark fleet

Our multinational study was initiated at a technical workshop in 2018, co-hosted by the international non-profit organisation Global Fishing Watch, Japan’s Fisheries Research and Education Agency, and the Australian National Centre for Ocean Resources and Security (ANCORS) at the University of Wollongong. The study was led by Jaeyoon Park from Global Fishing Watch and Jungsam Lee from the Korea Maritime Institute, and included scientists, engineers and policy experts from Korea, Japan, Australia and the US.

Together, the research team conducted an unprecedented synthesis of four satellite technologies, combining automatic identification system (AIS) data, optical imagery, infrared imagery, and satellite radar to create the most comprehensive picture of fishing activities in the area to date. 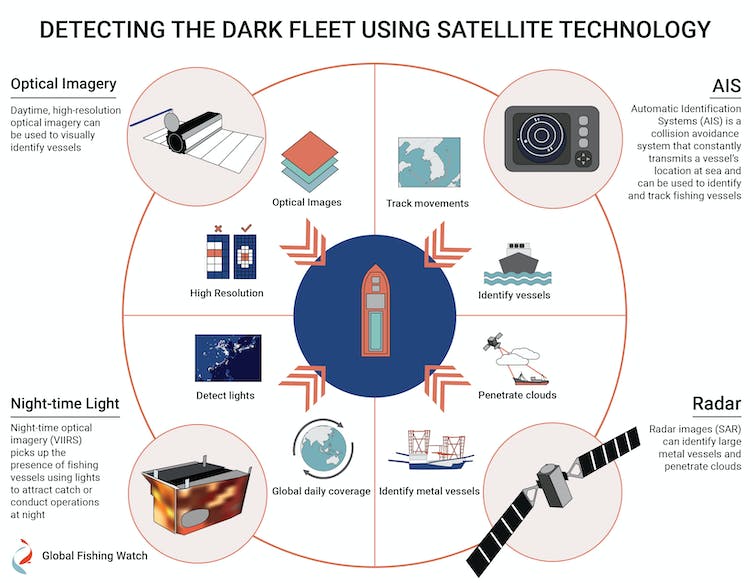 Global Fishing Watch The research team focused on the two most common types of fishing vessels active in the area: pair trawlers and lighting vessels. Pair trawlers travel in teams of two, dragging a net between them, and can be identified in satellite imagery by their characteristic pairs. The team used a machine learning approach called a convolutional neural network to pick out pair trawlers from high-resolution optical satellite imagery, verified with satellite radar and AIS data. With these three technologies, the team estimated approximately 796 distinct pair trawlers operated in North Korean waters in 2017, and 588 in 2018, and traced these vessels back to Chinese ports. 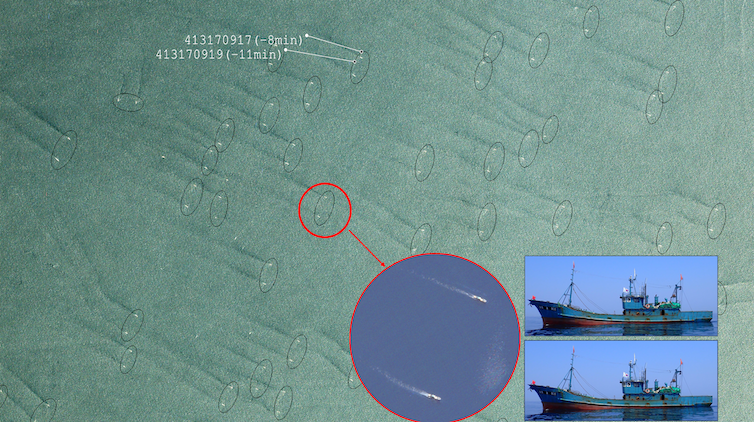 Pair trawlers can be detected from satellite imagery. Planet / Global Fishing Watch Lighting vessels use bright lights to attract fish. The Chinese vessels are uniquely bright, using as many as 700 incandescent bulbs which put out as much light as some football stadiums. To track these lighting vessels, the research team used high-sensitivity infrared imagery cross-referenced with high-resolution optical imagery and satellite radar. This analysis identified approximately 108 lighting vessels of Chinese origin operating in North Korean waters in 2017 and 130 in 2018. These analyses allowed researchers to estimate that more than 900 distinct fishing vessels fished these waters in 2017, and more than 700 in 2018. 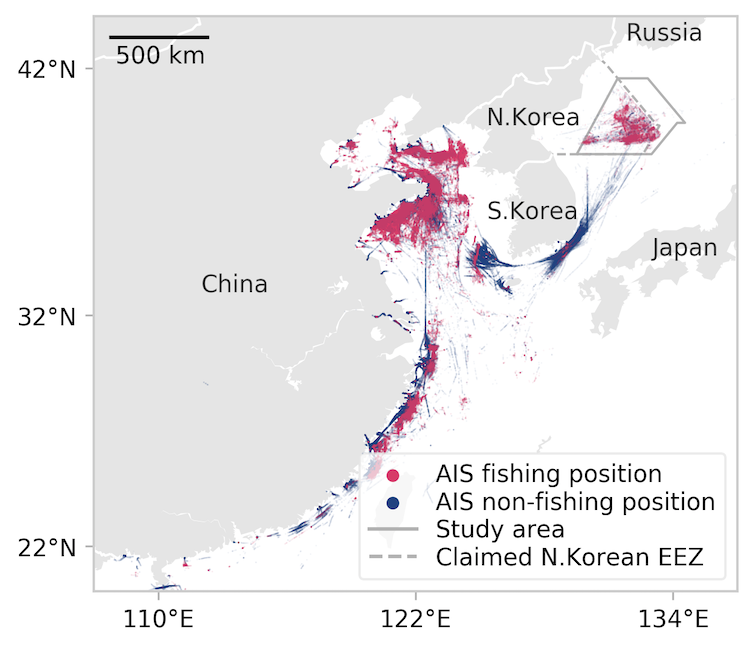 Automatic identification system (AIS) data show the origin of vessels fishing in North Korean waters. Global Fishing Watch We also identified low-intensity lighting vessels: the North Korean fleet of much smaller boats. North Korean fishing vessels are typically wooden boats 10–20 metres long, using only 5 to 20 light bulbs. We spotted about 3,000 North Korean vessels fishing in Russian waters during 2018. While Russia historically licensed small numbers of North Korean boats, they stopped issuing permits in 2017, suggesting this activity is also likely in violation of fishing laws. In recent weeks, the study team has undertaken a follow-up analysis to verify if the illegal fishing has continued in the interim since the paper was first submitted for peer review. The analysis identified approximately 800 vessels from China fished in 2019 in North Korean waters, indicating that the illegal activity is ongoing. Read more: What a tangled net: unravelling the international complications of tuna conservation A political and ecological problem This massive operation poses substantial implications for fisheries governance and regional politics. If the vessels are not approved by China and North Korea, they are fishing illegally in contravention of Chinese and/or North Korean domestic regulations. On the other hand, if they are authorised by China or North Korea, it is a violation of UN sanctions and illegal under international law. In addition, the fishing is a catastrophe for regional fish stocks. The Japanese flying squid (Todarodes pacificus) is targeted by several fishing fleets and is a critical seafood for South Korea, North Korea and Japan. The lack of cooperation and data-sharing prevents accurate stock assessments and sustainable management of a fishery that has already declined by approximately 80% since 2003. 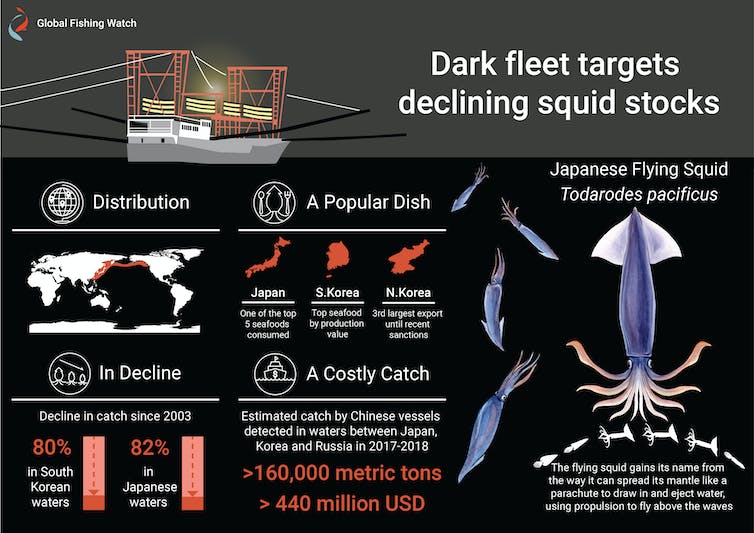 Japanese flying squid are in sharp decline. Global Fishing Watch The study demonstrates the ongoing need for improved understanding of the often hidden dynamics that contribute to illegal, unreported and unregulated fishing. Political barriers and conflicts often hinder international cooperation, data sharing and effective joint fisheries management. Combining satellite technologies can reveal the activities of dark fleets, filling a major gap in the management of distant fisheries. But to ensure safe, legal, and sustainable fishing, regional cooperation and a renewed focus on transparency and reporting are necessary.