A target of 70% private and 30% public dwellings is an accepted standard for public housing renewal projects in several Australian states. This level of private ownership is said to be necessary to counter stigma and the supposed demotivating impacts of concentrated disadvantage. When we looked at the impact of applying this model to the planned Waterloo redevelopment in inner Sydney, the demographic projections were revealing.

Read more: Why the focus of stimulus plans has to be construction that puts social housing first

Our analysis shows the project would reduce the suburb’s proportion of social housing dwellings from 30% to about 17%. About 30% of households in the suburb would be owner-occupiers. Private renters might rise to more than 50% of households.

Social mix is often proposed as an antidote to a range of presumed problems associated with public housing estates. With the need for a social housing stimulus package receiving attention, and the Victorian government announcing a A$500 million program, it’s timely to revisit the mix of tenancies in estate redevelopments.

State housing authorities favour a mix of public and private residential tenures when they redevelop large public housing estates. Authorities can then sell the majority of new dwellings to private owners and investors.

As Kate Shaw, Janet McCalman and Deborah Warr have explained in The Conversation, the strategy doesn’t always work as promised. Drawing on extensive empirical research into mixed-tenure renewal neighbourhoods, the evidence shows simple mathematical “one size fits all” targets do not work. Decisions on the residential mix need to be sensitive to local settings and needs.

Nonetheless, an orthodoxy has emerged among some housing authorities that social housing tenants should make up 30% of households while 70% should be sold to owner-occupiers and investors.

The case of Waterloo

In Waterloo, limitations of the fixed-ratio approach relate to the likely composition of the post-renewal resident population.

The Waterloo estate site now contains about 1,900 public housing units. The renewal plan proposes retaining this number in the context of a three-fold increase in dwellings with a 70:30 private-public tenure mix. This will result in a total of about 6,500 dwellings.

At the suburb or neighbourhood level, Waterloo had 6,151 dwellings in 2016. As the table below shows, almost exactly 30% of these were let to social housing tenants. 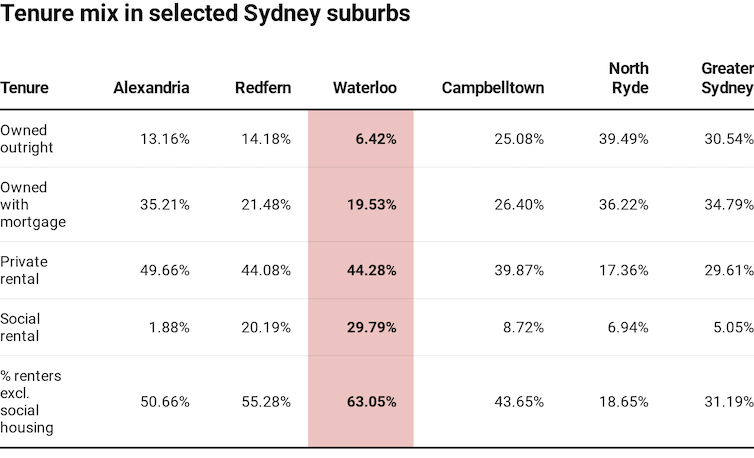 Data: ABS Census 2016, Author provided The table also shows the large variation in tenure mix across five Sydney suburbs and the Greater Sydney area. Some 44% of all dwelling stock in Waterloo was already rented privately. That’s almost 50% more than the Sydney-wide average of just under 30%. Importantly, 63% of private dwellings in Waterloo are privately rented – double the Greater Sydney proportion. Located close to three universities and the CBD, Waterloo is dominated by investor-owned rental housing. Future occupation is likely to follow this pattern. Read more: We still live here: public housing tenants fight for their place in the city More like 17% social housing State housing authorities measure tenure mix within public housing estates. But the Australian Housing and Urban Research Institute recommends measuring tenure mix at the neighbourhood scale. Adding 4,500 new private households, while maintaining current social housing numbers, will reduce the proportion of social housing in the suburb of Waterloo to about 17%. Projecting the current rate of renters in private dwellings onto the proposed 70:30 renewal mix might be expected to result in 63% of new private dwellings being privately rented. The suburb would then comprise 52% private renters. Less than one-third of residents would be owner-occupiers. The chart below shows how applying the 70:30 target to redeveloping the public housing estate could actually reduce tenure diversity for Waterloo. 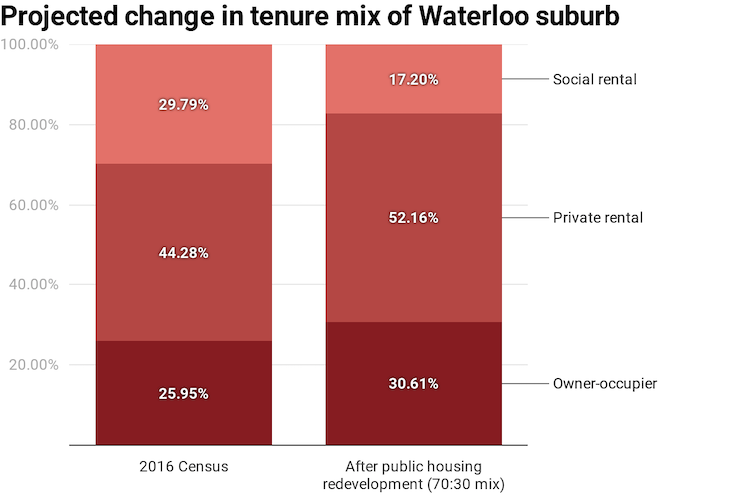 Data: ABS Census 2016, Author provided Read more: Voices of residents missing in a time of crisis for public housing Many private renters struggle too The need for more social and affordable housing in well-serviced, inner-urban areas is well recognised. Getting the residential tenure mix right through renewal is key. In the only full-length book on social mix in Australia, Kathy Arthurson notes social disadvantage occurs in both public and private rental housing. She writes: The omission of private rental from the social mix literature is problematic, as in Australia and elsewhere most poor renters are in private rental and not in public housing. Read more: Private renters are doing it tough in outer suburbs of Sydney and Melbourne A key element of the case for limiting social housing to 30% in redevelopment projects is the belief that any more would scare off potential private buyers and reduce developer returns. However, an RMIT evaluation of the Victorian Public Housing Renewal Program showed the presence of social housing had little effect on sales of private apartments in renewed inner-city public housing estates. Another evaluation of the Kensington renewal project in Carlton, Victoria, found strong investor sales but fewer owner-occupiers than anticipated. Key takeaways Recent research in Melbourne and Sydney suggests the supposed benefits of social mix are based on owner-occupiers, not more transient private renters. It also shows social mix renewals that apply a simplistic 70:30 target within a narrowly defined boundary around an “estate” risk seriously undervaluing large public housing assets.