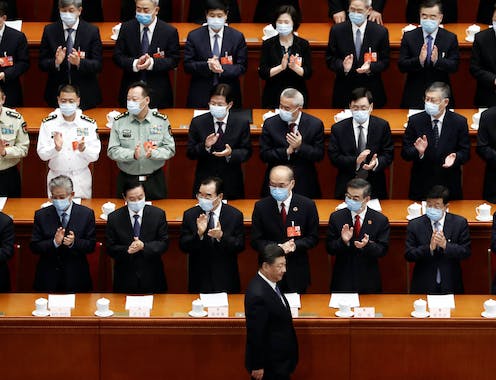 Chinese law professor Xu Zhangrun, who completed his PhD at the University of Melbourne, has become the latest high-profile critic of President Xi Jinping to be silenced for his views. It’s a clear sign the Communist Party leadership has decided to completely shut down any political criticism, even from academics.

Xu was detained in Beijing this week on spurious charges, more than a year after being suspended by Tsinghua University in Beijing and placed under “investigation” by the Chinese security apparatus.

According to witnesses, more than a dozen police officers, from both Beijing and the southwestern city of Chengdu, came in several cars to take Xu away from his residence in the suburbs of Beijing.

Read more: How vulnerable is Xi Jinping over coronavirus? In today's China, there are few to hold him to account

Xu’s wife should have received a certificate for retention, but for some reason the certificate has not been released to the public. According to a friend of Xu’s, the police told his wife he was detained for visiting prostitutes in Chengdu.

These kinds of ridiculous allegations against political dissidents are not uncommon in China. Whatever the excuse the Chinese authorities come up with to punish Xu, everyone knows he is in trouble because of his academic and political writings.

Xu’s detention clearly demonstrates the focus of Xi’s crackdown against dissent has expanded from activists to scholars. But it also reveals Xi’s profound sense of insecurity in the face of criticism from those within the Chinese Communist Party, the Chinese thinking public, civil society and foreign governments.

Who is Xu Zhangrun?

Xu was born in 1962 in a rural town in Anhui province, one of China’s poorest regions. He earned his Master’s degree in law in China and completed his PhD at the University of Melbourne. His PhD thesis, an exploration of the relationship between Chinese Confucian tradition and the law, was later published as a book.

Xu specialises in legal philosophy and constitutional theories, and has published several books in these areas. He had been a professor for more than 20 years at the prestigious Tsinghua University, which had been attended by Xi and other Communist Party leaders.

Xu is, however, best known for a series of major essays published since 2016, which provide an overview of Chinese modern history and the disasters caused by the Chinese Communist Party.

The most noteworthy of these essays include Imminent Fears, Immediate Hopes published in July 2018; Viral Alarm: When Fury Overcomes Fear, published in February 2020; and his final essay, China as a Lone Ship on the Vast Ocean of World Civilisation, published in May.

Read more: Why the coronavirus has become a major test for the leadership of Xi Jinping and the Communist Party

What has he written about Xi Jinping?

In these works, Xu makes scathing criticisms of Xi, the “people’s leader” in charge of the party, state and army, with lifetime tenure. He denounces Xi for turning to totalitarian rule since his rise to the top in 2012, blaming him for the political, economic and cultural regression of China.

He dissects the sheer folly, as well as the dangers, resulting from Xi’s restoration of a Mao-style, strongman autocracy in China.

As he writes in Imminent Fears,

It is feared that in one fell swoop China will be cast back to the terrifying days of Mao. Along with this constitutional revision [in March 2018 to abandon the term limits on the presidency] there is also a clamour surrounding the creation of new personality cult, something that in particular has provoked the Imminent Fears.

Xu also condemns Xi’s deplorable responses to the COVID-19 outbreak, including the initial cover-up at the start of the pandemic in Wuhan and the suppression of freedom of speech among those trying to sound alarms about the severity of the outbreak.

In Viral Alarm, which has been translated into English by sinologist Geremie Barme, Xu describes these government failures in unsparing terms:

It is a system that turns every natural disaster into an even greater man-made catastrophe. The coronavirus epidemic has revealed the rotten core of Chinese governance; the fragile and vacuous heart of the jittering edifice of the state has thereby been shown up as never before.

In his essays, Xu makes biting observations that are couched in an erudite and elegant style of prose, one that is both powerfully engaging and glories in its own literary brilliance.

Here’s another excerpt from Viral Alarm:

The bureaucratic and governance system of China that is now fully on display is one that values the mediocre, the dilatory, and the timid. The mess they have made in Hubei Province, and the grotesque posturing of the incompetents involved [in dealing with the coronavirus] have highlighted a universal problem. A similar political malaise infects every province and the rot goes right up to Beijing.

Why Xu was right to be worried

Xu’s is a global vision; it embraces the unfolding story of modern Chinese history covering a span of nearly two centuries.

In his essays, he reaffirms the vital value of democracy and constitutionalism and examines both the successes and limitations of the “reform and openness” policies of the past 40 years.

He also evaluates China’s current state and advocates for the country to pursue the path of ongoing transformation toward constitutional democracy.

Xu’s essays have been banned in China since 2018, but have circulated widely over the internet through private channels. They have led to heated discussions in China and received extensive international attention.

He knew he was in great danger by making these criticisms. Xi is known to have a particularly pusillanimous nature, and is always alert to slights and prepared to mete out punishment. He regards all outspoken criticism to be like a dagger aimed at his heart.

In Xu’s final essay, China as a Lone Ship, he called for a change in leadership – one which now seems virtually impossible.

Enough, the mouldy campaigns of deification and personality cult; enough, the monstrous lies and endless sufferings; enough the blood-sucking red dynasty and greedy party-state; enough, the absurd policies and practices in trying to put the clock back [to a more Mao-style leadership] over the past seven years; enough, the mountains of bodies and seas of blood resulting from the red tyranny over the past 70 years.