After a lengthy delay due to the coronavirus pandemic, the legal case that constitutes the most significant threat to freedom of expression in this country will soon play out in the ACT Supreme Court.

This is the prosecution of Bernard Collaery, the former ACT attorney-general and lawyer for Witness K, the former ASIS officer turned whistleblower.

After an ACT Supreme Court ruling last week, significant parts of the trial against Collaery will now be held in secret, but the argument put forward by the attorney-general that certain information in the case must be kept classified is extraordinarily weak.

Open justice is an essential part of our legal system, the rights of defendants and of our democracy.

Background of the case

The prosecutions arose from the disclosure of information related to a covert ASIS spying operation – the bugging of the cabinet offices of Timor-Leste. The operation was authorised by Alexander Downer, then-foreign minister, in 2004.

Its purpose was secretly to obtain information about Timor-Leste’s negotiating strategy before the International Court of Justice (ICJ) in a case seeking to clarify the country’s maritime boundary with Australia. This was crucial to determining the countries’ competing claims to rich oil deposits in the Timor Sea. The case ended because Australia pre-emptively withdrew from the ICJ’s jurisdiction.

In 2013, Timor-Leste took its concerns about the Australian surveillance operation – and the legal and commercial disadvantage it had suffered – to the Permanent Court of Arbitration in The Hague. It briefed Collaery to represent its interests. Witness K was invited to give evidence.

Read more: After a border dispute and spying scandal, can Australia and Timor-Leste be good neighbours?

Australian Attorney-General George Brandis, however, ordered the confiscation of Witness K’s passport to prevent him giving evidence to the court and ordered ASIO raids on the homes and offices of both K and Collaery.

The raid on Collaery’s premises yielded a copy of the full affidavit he had drafted summarising the case Timor-Leste was to present to the court. From a legal perspective, these raids were scandalous.

Witness K and Collaery were then notified they could be prosecuted for breaches of the Intelligence Services Act. But nothing happened until 2018, when Attorney-General Christian Porter decided the prosecutions should proceed.

Witness K gave notice last year that he would plead guilty, but Collaery decided to contest the charge.

There is a certain Alice in Wonderland quality about all this – everything has been turned upside down.

The two people who acted in the national interest by disclosing alleged unlawful activity by Australia’s intelligence service are the defendants in a criminal case. The government, which initiated the covert operation, has become the prosecutor. Something has gone very wrong. 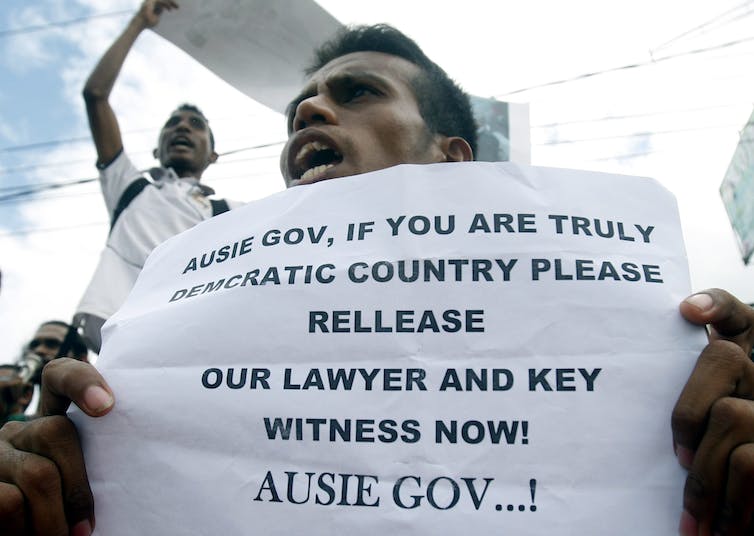 East Timorese protesters outside the Australian embassy in Dili in 2013. ANTONIO DASIPARU/EPA

Possible defences under the law

So, what are the legal issues that are likely to arise? The real problem for Witness K and Collaery is that section 39 of the Intelligence Services Act has no public interest defence, in other words, they can’t argue that disclosing the confidential information was done in the public interest, and hence, not against the law.

There are two other defences available, but neither fits easily with the facts of the case.

One allows information to be disclosed if it has already been communicated or made available to the public with the authority of the Commonwealth. The facts of this case are widely known in the public arena owing in part to interviews Collaery gave to journalists. The Commonwealth, however, did not provide permission for this disclosure.

The second defence allows the disclosure of information to the inspector-general of intelligence and security (IGIS), who monitors and oversees the activities of the intelligence agencies.

Read more: Australia's quest for national security is undermining the courts and could lead to secretive trials

Witness K requested IGIS permission to disclose information about the ASIS bugging operation for the purpose of giving evidence to the Permanent Court of Arbitration. He received permission, but the government then withdrew his passport to prevent him from travelling to The Hague.

Witness K and Collaery might have argued the disclosures were made in accordance with the Commonwealth Public Interest Disclosure Act, otherwise known as the Whistleblower Act.

Section 41, however, exempts intelligence information from being disclosed under this act.

Has the government acted unlawfully?

At this stage, it is worth reflecting on the illegal activities in which the government may have engaged. It appears likely ASIS undertook an act of criminal trespass in Timor-Leste by planting surveillance devices in its cabinet room. As in every other democratic country, Timor-Leste’s cabinet deliberations are by law secret.

It is customary in international law – and spelled out explicitly in the UN Convention on the Jurisdictional Immunity of States – that nations and their property are immune from the domestic jurisdiction of other countries. So, Australia also transgressed international law by raiding the offices of Witness K and Collaery and confiscating documents that were clearly the property of the Timor-Leste government.

In addition, the law in Australia protects legal professional privilege, which guarantees that communications between a lawyer and client are confidential.

By, in effect, stealing Collaery’s extensive legal advice to the Timor-Leste government, ASIO violated this principle. Brandis, however, has said

No lawyer can invoke the principles of lawyer–client privilege to excuse participation, whether as principal or accessory, in offences against the Commonwealth. 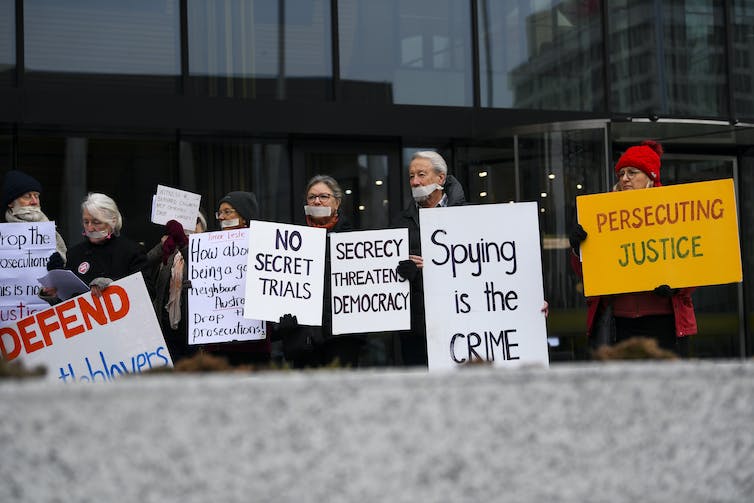 How the High Court could view the case

It is clear nothing permits the government to take actions that are contrary to Australian law or the law of another country.

The defendants could argue, then, that disclosing information for the sole purpose of exposing government illegality should not be prohibited by Section 39 of the Intelligence Services Act.

A conviction in these circumstances would be a travesty, particularly as it carries with it a maximum sentence of two years imprisonment. This is the penalty Collaery and K are facing.

Read more: The shaky case for prosecuting Witness K and his lawyer in the Timor-Leste spying scandal

Next, it ought to be remembered the High Court has read into the constitution an implied right to freedom of political communication.

It is quite likely the High Court will find the relevant provisions of the Intelligence Services Act are cast so broadly as to transgress this constitutionally guaranteed freedom. If so, the government’s case will fall apart.

Should these arguments be successful, Witness K and Collaery will emerge as the free speech heroes they are.

Even more importantly, the profoundly chilling effect the imprisonment of individuals of conscience would have on political and journalistic freedom in this country will have been avoided. Australian democracy will have repelled a grievous attack.