“Behold, Saint Sinead of Stuff”, wrote one observer, while pointing out what else would be needed: financial backing, government subsidies, and management of internal costs and debt.

But behind these signs of hope the Stuff initiative was emblematic of a rapidly disintegrating media system.

Here is the news: layoffs and closures

COVID-19 only accelerated the collapse. The national lockdown and forecast economic contraction have been commercially disastrous for all private media organisations. Redundancies and closures have gone viral.

Read more: Another savage blow to regional media spells disaster for the communities they serve

Confronted by this unfolding catastrophe, the government finally announced a NZ$50 million emergency package. This included $21 million to offset TV and radio transmission fees for six months, $16.5 million to reduce contributions to the NZ On Air content funding agency for the financial year, and $11 million in targeted assistance for specific media companies.

But the response was late, partial and narrowly focused. COVID-19 has exposed a double crisis in New Zealand’s news media that short-term fixes do little to address.

A crisis over 30 years in the making

These trends can be traced back to the 1980s. The restructuring of Radio New Zealand (RNZ) and Television New Zealand (TVNZ), the launch and subsequent sale of TV3, the privatisation of Telecom (1990) and the abolition of all restrictions on foreign media ownership (1991) set the scene for today’s crisis.

At the same time, with the rise of Google and Facebook, television’s advertising share declined from 34% in 1988 to 21% in 2018. Before COVID-19, digital advertising was worth NZ$1 billion, about 40% of New Zealand’s entire advertising turnover. The pandemic’s economic shock has hit ad revenues even harder. 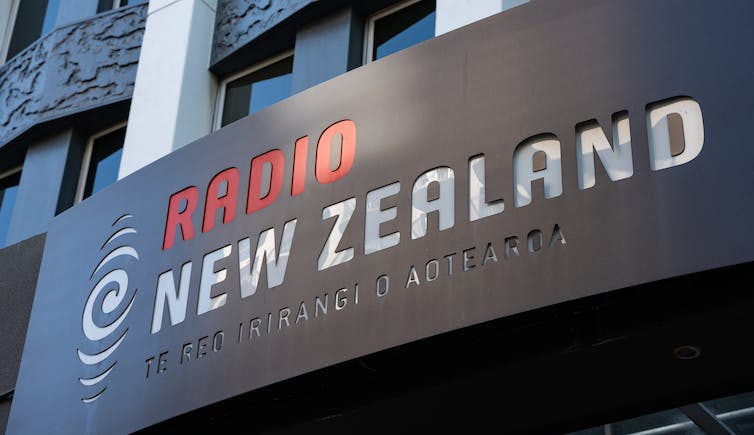 Underfunded for years, Radio New Zealand could now be part of the solution to a media crisis. www.shutterstock.com

Stalling revenues, dashed profit expectations and fragile share prices persuaded major players that amalgamation was the answer. But this strategy failed. The Commerce Commission prevented attempted mergers between Sky TV and Vodafone, and NZME and Stuff, due to monopoly fears and the perceived risk to diversity of information sources.

There is a better way

So what is the answer? Nothing short of a full-blown news media reconstruction strategy.

Second, a national interest test for any overseas investment in New Zealand should apply to transnational media acquisitions. As media commentator Gavin Ellis has observed, “journalism [is] a strategic asset over which New Zealanders must have control”.

Third, existing government proposals for a TVNZ-RNZ merger within a new multi-platform entity need urgent development. The new organisation should insulate some of its operation from commercial pressures. A public service philosophy for the relevant stations, channels and platforms should be clearly stated and enshrined in legislation.

Read more: Google and Facebook pay way less tax in New Zealand than in Australia – and we're paying the price

Here, I would include an online magazine of arts, current affairs and popular culture to succeed the Listener. The organisation’s board must be independent and representative, with informal links to the Māori Television Service.

Finally, as communications expert and public media lobbyist Peter Thompson has proposed, the government should impose a digital services levy on the tech giants that have siphoned off domestic advertising revenue without investing in local content. This would help generate the revenue to fund public interest journalism initiatives.

We know what to do. Now is the time to reconstruct journalism and public media in Aotearoa-New Zealand.