The protests that have engulfed American cities in the past week are rooted in decades of frustrations. Racist policing, legal and extra-legal discrimination, exclusion from the major avenues of wealth creation and vicious stereotyping have long histories and endure today.

And in what became known as the “long, hot summer of 1967”, anger in America’s cities boiled over. The Civil Rights Act of 1964 had ended segregation, but not brought equality. Racial injustice at the hands of police remained. Protesters took to the streets in more than 150 cities, leading to violent clashes between black residents and largely white police forces.

Read more: As Minneapolis burns, Trump's presidency is sinking deeper into crisis. And yet, he may still be re-elected

White moderates condemned these armed rebellions as the antithesis of the famed nonviolent protests of civil rights activists. But Martin Luther King, Jr., himself, recognised that the success of nonviolence lay in the ever-present threat of violence.

He noted, too, that riots “do not develop out of thin air.”

Policing practices a trigger for unrest

The trigger for African-American uprisings in the US has almost always been acts by police forces, such as the recent death of George Floyd in Minneapolis.

Sometimes, unrest has broken out when police have refused to act on behalf of black residents. When an African-American teenager drifted into the “white” part of Lake Michigan in Chicago in 1919, for instance, a white man on the banks threw rocks at him and he drowned. A policeman did nothing to stop the assailants, nor did he arrest them. 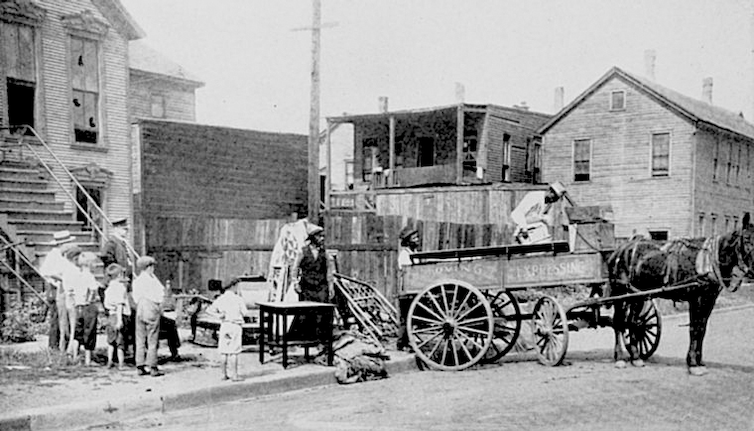 A family leaving a damaged home after the 1919 Chicago race riot. Wikimedia Commons

From the perspective of those targeted and traumatised by police and discriminated against by society at large, property damage and looting were justified.

In the century after slavery ended in 1865, white Americans had established new ways to exploit black people’s labour and keep African Americans impoverished. These methods ranged from legislation governing work contracts and mobility to racist stereotyping.

Read more: Why cellphone videos of black people's deaths should be considered sacred, like lynching photographs

Such laws and customs were all underpinned by violence, including murder. From the late 1800s until 1950, more than 4,000 African Americans were victims of lynchings. They were so acceptable they were sometimes advertised in the press in advance. These were extra-judicial killings, but often included the police (or they would at least turn a blind eye to the proceedings).

Black Americans who sought better lives in northern cities found racism there, too. White landlords had a captive market in segregated neighbourhoods, such as New York’s Harlem and Chicago’s South Side, which caused them to become increasingly crowded and rundown.

African Americans were often kept out of nicer neighbourhoods in cities nationwide, either through violent acts perpetrated by white residents or even by police officers themselves. The houses of middle-class black Americans in the Birmingham, Alabama, suburb where political activist and philosopher Angela Davis grew up were bombed so often the area was nicknamed “Dynamite Hill”.

Even the presence of black officers in the police forces of northern cities could not alter the fundamentally racist operations of police forces. 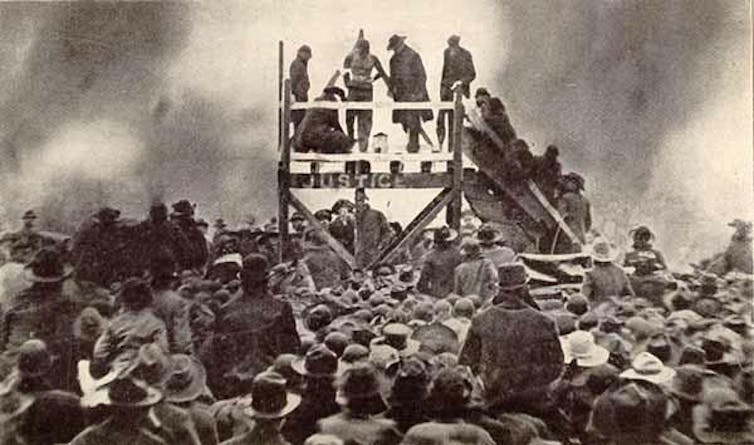 The 1893 public lynching of a black teenager in Texas. Wikimedia Commons

The protests of the 1960s were driven in part by police brutality, but also by the exclusion of African Americans from full civic participation.

Even if African Americans could accumulate the capital to acquire a mortgage, a system of laws known as “redlining” prevented them from purchasing property.

That, in turn, thwarted black families’ efforts to accumulate wealth at the same rate of white families. African Americans lived, therefore, in neighbourhoods that were poorer. Those communities had worse sanitation, no green spaces, grocery stores with high prices and poorly resourced schools.

All the while, it was African Americans who continued to work in low paid domestic and service labour jobs that propped up a booming economy that disproportionately benefited white Americans. It’s no wonder the writer James Baldwin said in 1968,

After all, you’re accusing a captive population who has been robbed of everything of looting. I think [that accusation] is obscene.

The effects of those policies are still in evidence today – and play a significant role in the discrimination and disenfranchisement of many African Americans.

Black families and individuals enjoy a drastically lower median level of wealth than whites or Asian Americans. This is true even among African Americans with high levels of education and high salaries. Generations of discrimination have left their mark as black Americans have been denied the gradual accumulation of largely untaxed wealth in housing and inheritance.

If you felt unease watching that Target being looted, try to imagine how it must feel for black Americans when they watch themselves being looted every single day. Police in America are looting black bodies. 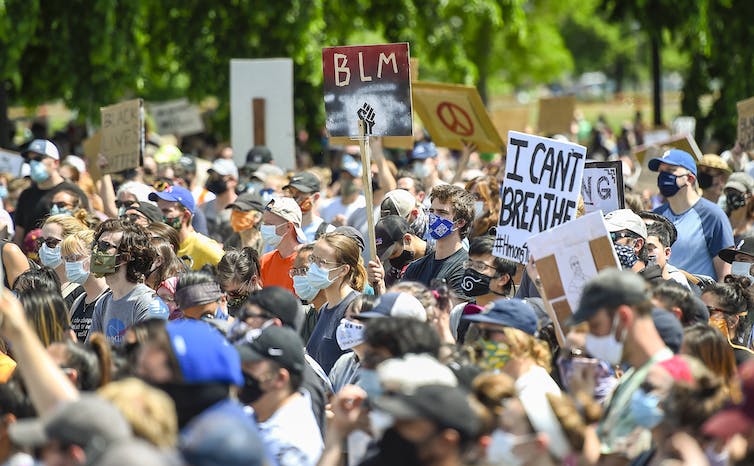 Protesters rally at the Minnesota State Capitol during the sixth day of protests over the arrest of George Floyd. CRAIG LASSIG/EPA

The ‘war on crime’ and mass incarcerations

In the wake of the 1967 unrest, federal policies shifted under President Lyndon Johnson from the “War on Poverty” to the “War on Crime”. African Americans were increasingly targeted in the expanding “law and order” and mass incarceration machine.

African Americans are also more likely to be arrested, charged with crimes, convicted and sentenced than white Americans.

All the while, police have been trained and equipped in ways that have blurred the line between civilian police and military forces. The violence of these police forces is becoming more difficult to justify, hence Slate running an article in the last week with the title “Police Erupt in Nationwide Violence”.

As a result, more and more grassroots groups are calling for police forces to be defunded, localised and radically demilitarised. Activists will also continue to remind us that black lives matter.

Until then, as civil rights lawyer Sherrilyn Ifill said this week,

if the rule of law is to prevail, then the people have to see some justice. If it always produces a result that is unjust, then how can we tell people to have faith in the justice system.