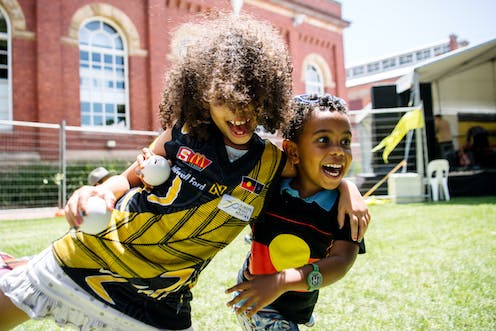 National Reconciliation Week is a time of reflection, talking and sharing of histories, cultures and achievements. It is a time to think about our relationships as Indigenous and non-Indigenous Australians.

This year’s theme is “In This Together”, a phrase that has taken on extra meaning as the world grapples with the coronavirus pandemic.

We have seen a range of measures to manage the spread of coronavirus in Australia, including movement restrictions, closures of government- and community-based services and border controls.

Governments have also put forward specific measures to protect Aboriginal and Torres Strait Islander communities, including travel restrictions into and out of remote communities under the Biosecurity Act.

This “lock-down” has undoubtedly been essential and, to date, has prevented the pandemic from reaching remote communities. It has also been supported by the National Aboriginal Community Controlled Health Organisation.

But local Indigenous communities have also shown tremendous leadership in protecting their own peoples from the virus. And perhaps ironically, the federal government has shown a willingness to listen to and engage with the expertise of the Indigenous health sector.

One of the many things this crisis has highlighted is that while disease continues to threaten Indigenous communities, Indigenous peoples have maintained their strength, tenacity and determination.

The loss of communities to pandemics

The threat of the pandemic has affected Indigenous Australians in very different ways from the general population.

For example, the collective rights and identities of Indigenous peoples are bound to place via language and territory. So there’s a fear that even if you lose a small number of a community – through an event like a pandemic - you begin to lose the people.

For instance, Norman Tindale’s iconic 1974 map, Tribal Boundaries of Australia, includes a language group in central Australia called Jumu. The country associated with this group on the map is Mount Liebig, Papunya and Haasts Bluff (today all located in the Haasts Bluff land trust, 250km northwest of Alice Springs).

However, the map of Indigenous languages created by the Institute of Aboriginal Development 30 years later, does not include the Jumu. Rather, the language group incorporating the lands of these three communities is Pintupi-Luritja.

Though language groups and their territories are dynamic, the fate of the Jumu has remained an unresolved question.

When one of this piece’s authors, Sarah Holcombe, undertook her PhD field research in the region in the mid-1990s, many senior community members had heard of them, but said they were mirri tjuta (all dead).

Tindale, rather blithely, recorded that several years after an anthropological expedition to the region in 1932, an “epidemic killed off many of the Jumu”. Little is known about this epidemic, but it was likely influenza.

Tragically, there are many other examples of entire groups of Indigenous peoples being decimated by diseases against which they had no defences. And the threat remains ever-present with communities across Australia today, due to their socio-economic disadvantage, poorer health outcomes and other vulnerabilities.

Such was the concern as the coronavirus pandemic was worsening in late March, for instance, that Sally Scales, deputy chairperson of the APY Land Council, even suggested evacuating all the senior Anangu from the lands to hospitals in Adelaide as a pre-emptive measure.

There are obvious parallels between the “protective and restrictive laws” that Indigenous Australians were subjected to in the colonial era and current measures to contain the pandemic.

Restrictions on movement within states and across borders, as well as into and out of remote communities, seem disturbingly resonant with this ugly history. One could say Indigenous Australians are no strangers to “lock-downs”.

However, Indigenous organisations have also shown leadership in this time of crisis. These include the network of representative bodies (such as land councils) and the 143 Aboriginal-managed health services and affiliates that are members of the National Aboriginal Community Controlled Health Organisation.

The Central Land Council acted early in central Australia by suspending all non-essential travel to remote communities and cancelling all mineral exploration permits.

Read more: Why self-determination is vital for Indigenous communities to beat coronavirus

Indigenous Australians have always had some form of agency, even if this was “passive resistance” against punitive laws. But the Indigenous response to the pandemic is driving home the importance of local-level decision-making.

Though it is early days, evidence emerging from remote communities shows just how strong and effective this local leadership has been.

In the Kimberley region, for instance, communities “locked the gates” themselves, only allowing essential services in.

The evacuation of “country-men and women” from regional towns back to remote communities, as happened in the Kimberley region, also provided opportunities to spend time with family, hunt, return to country and pass on inter-generational knowledge.

In far north Queensland, residents set up roadblocks outside their community – a move described by a local health official as being “well ahead of the rest of the country”.​

And some communities in central Australia put a fuel limit of $20 at the bowser to ensure community members would not be tempted to travel too far.

Is government finally ready to listen?

There have been signs of a shift in the federal government’s approach to working with Indigenous NGOs and representative bodies, as well.

According to NACCHO CEO Pat Turner, these groups have had “purposeful engagement” with the government over how to best respond to the crisis and protect vulnerable communities.

There is hope this may provide Indigenous peak body representatives with additional authority and leverage in the new Closing the Gap agreement negotiations. And that there will be scope to push towards greater structural change and give Indigenous communities greater power to manage their own affairs.

This would be in line with the UN Declaration on the Rights of Indigenous Peoples, which seeks to protect Indigenous peoples’ rights to participate in decision-making over matters affecting them.

These are also lessons Indigenous Australians have to share, and experiences non-Indigenous people can learn and benefit from. As Reconciliation Week comes to a close, we should reflect on this and ensure we don’t go back to what was “normal”, the status quo.