The New South Wales government has focused on delivering more motorways and rail links for Sydney, along with main roads in regional NSW, since the Coalition won office in 2011. The biggest of these, WestConnex, is still being built. Plans for yet another major motorway, the Western Harbour Tunnel and Beaches Link, are well advanced.

A hefty environmental impact statement (EIS), but incredibly no business case for a project costing about A$15 billion, was recently put on public exhibition. When submissions closed at the end of March, the vast majority of 1,455 submissions from public agencies, individuals and organisations were objections to the Western Harbour Tunnel project.

The NSW government has promoted the Western Harbour Tunnel since announcing it in 2014, but hasn’t convinced the many objectors. YouTube/NSW government

The proposal follows three stages of WestConnex and the F6 Extension south of Sydney. Thousands of objections in the planning process did not stop the government going ahead with each stage.

This led to a state parliamentary inquiry in 2018. Its first finding was: “That the WestConnex project is, notwithstanding issues of implementation raised in this report, a vital and long-overdue addition to the road infrastructure of New South Wales.”

However, the committee also found “the NSW Government failed to adequately consider alternative options at the commencement of the WestConnex project” and that “the transparency arrangements pertaining to the WestConnex business case have been unsatisfactory”.

These two findings apply to the Western Harbour Tunnel process too.

In the run-up to the 2019 state election, the government promoted the project and placed on public exhibition an environmental impact statement for the A$2.6 billion F6 extension between Arncliffe and Kogarah. 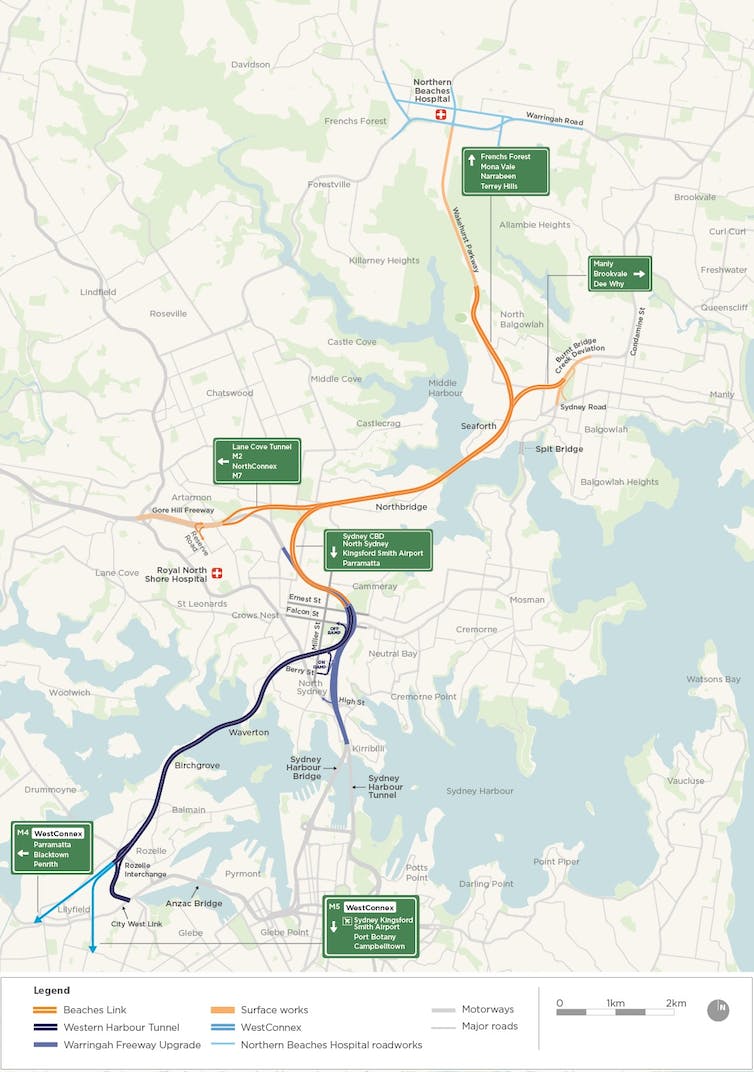 The state opposition promised to scrap the Western Harbour Tunnel and F6 projects. Instead, it would give priority to rail and public transport upgrades.

Some have suggested time-of-day road congestion charges as a much better option than more motorways.

Read more: How the NSW election promises on transport add up

The City of Sydney, noting “it has been a long-time critic of WestConnex”, said:

This is primarily because this costly motorway project will fail in its primary objective of easing congestion. Urban motorways do not solve congestion; they induce demand for motor vehicle trips and any additional capacity created is quickly filled. This phenomenon applies equally to the Western Harbour Tunnel and Warringah Freeway Project, a component of the WestConnex expansion.

The Inner West Council, whose suburb of Rozelle will be adversely impacted by the project, has also long opposed inner-urban motorways. It prefers “traffic-reduction solutions to addressing congestion, including public and active transport, travel demand management and transit-oriented development, with some modest/targeted road improvement”.

Willoughby City Council noted the limited time given for considering a very large EIS, made worse by the COVID-19 pandemic. It questioned why a public transport alternative was not assessed. “Known alternative solutions with lower climate impacts need to be considered to be consistent with action on climate change and improved resilience.”

In 2017, it was revealed the NSW government was instructing transport officials to ignore public transport alternatives to motorways such as the F6 extension and Western Harbour Tunnel. Wollongong-Sydney train travel times could be cut by half an hour for A$10 billion less, according to a Transport for NSW internal memo.

Read more: We can halve train travel times between our cities by moving to faster rail

This is at a time when Sydney train ridership has been increasing faster than the distance driven by Sydney motorists. Rail showed 39% growth over ten years to 2018-19 and road just 12% in a time of rapid population growth.

Over many objections, the F6 extension is proceeding. Many aspects of the Western Harbour Tunnel need further attention. The NSW Ports Authority is concerned about the amount of highly contaminated sludge that will be dredged up from the harbour. The shadow minister for roads, John Graham, notes dredging will be close to residential areas.

Heritage NSW has noted the project will have direct impacts on six sites, including the approaches to Sydney Harbour Bridge.

The Action for Public Transport (NSW) group questions the influence of the Transurban company on transport planning at a time when NSW’s long-term integrated transport and land use plans aim for net zero emissions by 2050. Its submission says:

The funding for the project should be reallocated to more worthwhile projects such as filling in missing links in urban public transport systems, disentangling the passenger rail network from the rail freight network, and providing faster rail links to regional centres.

What are these other priorities?

NSW has a shortage of “fit for purpose” rail infrastructure to serve a growing population. This includes the Sydney Metro West (an EIS is on exhibition) and ensuring the new Western Sydney Airport has a rail service. More funding is also needed to upgrade the existing rail system and to cover a A$4.3 billion cost blowout on the Sydney City and Southwest Metro project.

The government has acknowledged a need for better rail services to the South Coast, Newcastle, Canberra and Orange. In 2018, it commissioned an independent report on fast rail options for NSW by British fast rail expert Andrew McNaughton. The completed report is yet to be released.

The question now is should the Western Highway Tunnel be abandoned or, at the very least, deferred until major rail projects have been completed.