The Morrison government will provide a flat $1,500 a fortnight JobKeeper payment per employee for businesses to retain or rehire nearly six million workers, in a massive $130 billion six-month wage subsidy scheme to limit the economic devastation caused by the coronavirus.

Describing the initiative as “unprecedented action” for “unprecedented times”, Prime Minister Scott Morrison said this was a “uniquely Australian” solution to keep enterprises and their workers connected through to “the other side” of the crisis.

He said no Australian government had never made such a decision “and I hope and pray they never have to again.” 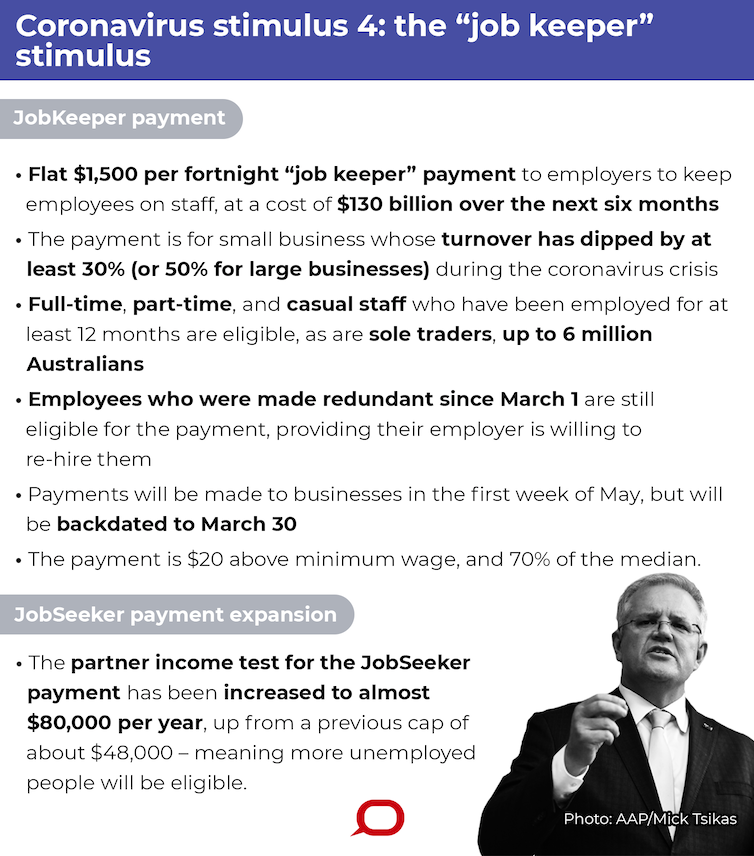 The Conversation, CC BY-ND The payment, made through the tax system, applies for workers of large, medium and small enterprises, and not-for-profits. It will start flowing from May 1, but will be backdated to March 30. Workers who have already lost their jobs will be eligible if they were on the enterprise’s books on March 1. It will be a flat rate for all those eligible, who include full-time, part-time, and casual workers (provided they have been with their employer for a year). Self-employed individuals will also be eligible. The payment is about 70% of the national median wage. For workers in the accommodation, hospitality and retail sectors - sectors hardest hit by the crisis - it will equate to a full median replacement wage. To be eligible, enterprises with an annual turnover of less than $1 billion must have lost at least 30% of their revenue after March 1 over a minimum of a month-long period. For businesses with turnovers of more than $1 billion the reduction in revenue has to be at least 50%. Where workers have already lost their jobs, they can be rehired by their employer, provided they were attached to the enterprise on March 1. This will mean some people who have applied for a Centrelink payment will reconnect with their firm and will move to the JobKeeper payment. Morrison and Treasurer Josh Frydenberg announced the scheme at 4 pm and almost 8000 businesses had registered by 5 pm. The $1,500 a fortnight will be paid whether the employee is working (in the case of an enterprise still operating) or not (if the business is not trading). Businesses that keep operating will have to pay each employee at least the $1,500, but there will be discretion about what’s paid above that. The $130 billion JobKeeper scheme is the third tranche of emergency assistance the government has unveiled since March 12. “This is about keeping the connection between the employer and the employee and keeping people in their jobs even though the business they work for may go into hibernation and close down for six months,” Morrison said. “We will give millions of eligible businesses and their workers a lifeline to not only get through this crisis, but bounce back together on the other side,” he said. The latest initiative brings the total support made available in the crisis to $320 billion, including $90 billion assistance from the Reserve Bank. The total amounts to the equivalent of 16.4% of GDP. Frydenberg said Australia was “about the go through one of the toughest times in its history”. The government had doubled the welfare safety net and now had gone even further, he said. Business welcomed the scheme. The Australian Chamber of Commerce and Industry said it was a “game changer”. The Business Council of Australia said the government had “made the right choice to work through the systems we already have in place to get assistance where it is needed as soon as possible.” But ACTU secretary, Sally McManus, expressed concern that $1500 a fornight might not be enough. She said the full median wage of $1,375 a week “is what is needed”. The government is also temporarily liberalising access to income support. The JobSeeker payment has been subject to a partner income test of about $48,000. This is being temporarily relaxed so an eligible person can receive the JobSeeker payment and the associated new Coronavirus supplement of $550 a fortnight provided their partner earns less than $79,762 a year In other coronavirus developments on Monday, Victoria announced it had moved to “stage 3” of the response to the crisis, with the two-person restriction on gatherings to become legally enforceable. The two-person rule was announced by Morrison on Sunday but it was left up to the states to decide whether to make it enforceable. Victorian Premier Daniel Andrews said: “If you are having friends over for dinner or friends over for drinks that are not members of your household, then you are breaking the law”. “You face an on-the-spot fine of more than $1,600”. NSW is also announced it will enforce the rule. Queensland, which has closed its border, is toughening border controls. Federal Deputy Chief Medical Officer Paul Kelly flagged modelling the government is using in its response will be made available later this week. Morrison has faced pressure for the modelling’s release. Kelly told a news conference he had asked his staff “to organise a meeting later this week where the modelling and the epidemiology and the public health response will be unlocked, and people will be able to ask questions about that. "I think we have been quite open with components of the modelling, but I respect that there is a large number of ways that modelling can be done, and so we need to be more transparent, and we will be.”