Over the last few weeks, photographs in the news and on social media have documented our behaviour in response to COVID-19. 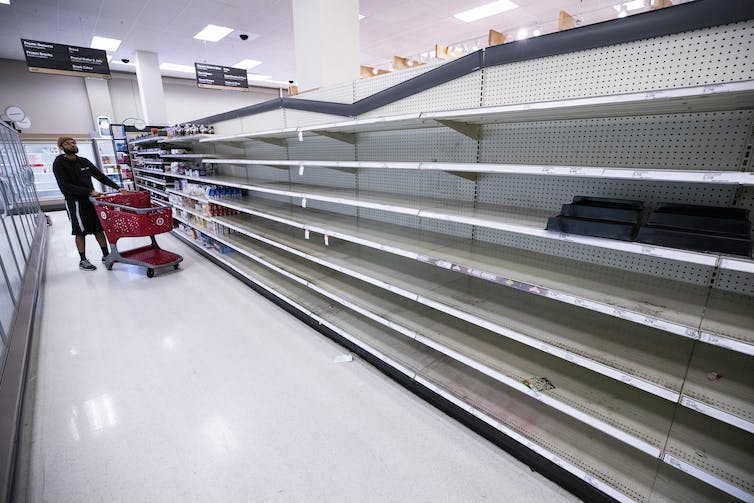 Empty shelves at a supermarket in Los Angeles, California, March 6 2020. These images also proliferate in social media feeds globally. For most 21st-century, first-world consumers, this scarcity is unprecedented. Etieene Laurent/EPA

That’s not all that is empty.

Images of empty public spaces – from the streets of Ginza, to soccer stadiums, to the Venice canals, to lone masked travellers on buses, trains and trams – evoke a sense of apocalyptic films and the end of days. 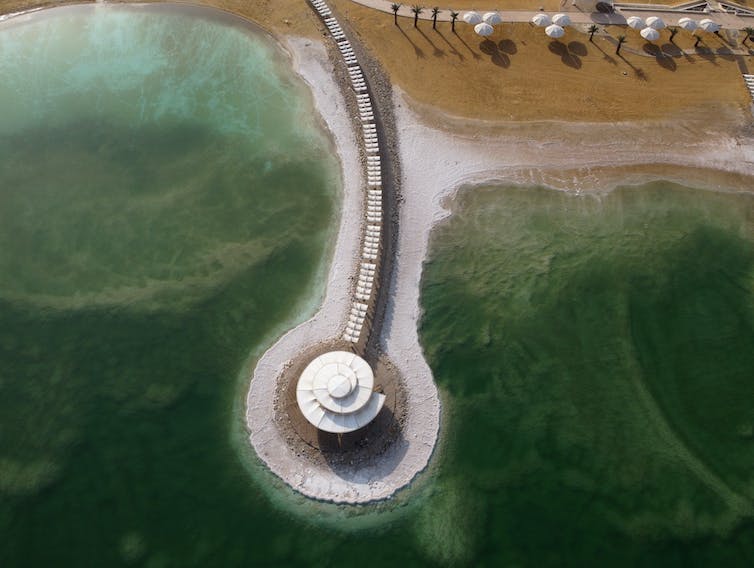 The empty Ein Bokek beach on the Dead Sea, Israel, March 15 2020, a bird’s-eye view taking us where the majority of us cannot go. Abir Sultan/EPA

Photographs of empty public spaces are increasingly filling our news feeds, documenting our response to a worldwide pandemic.

While these pictures point to a frightening situation, we can’t help being drawn into the otherworldly and unfamiliar scenes. They make us stop, look and linger as we try to comprehend what these places without people are saying.

Our attraction to images of the world without us reveals a collective fascination for the apocalypse or, perhaps, extinction. 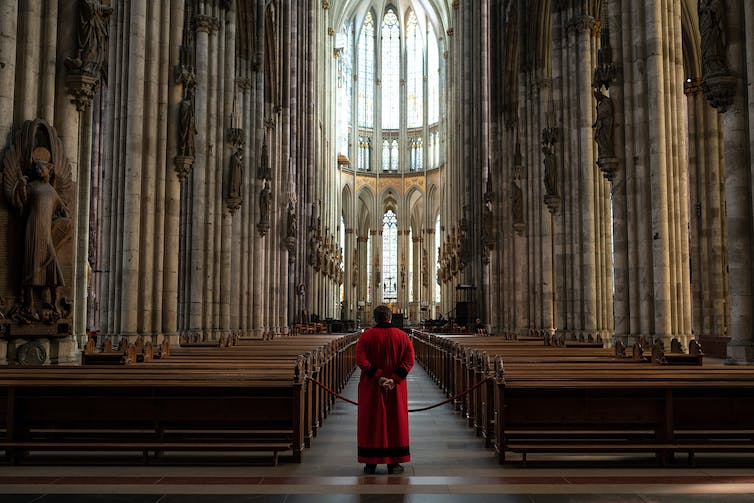 A clergyman on March 15 2020 in Cologne Cathedral, Germany, where mass has been cancelled. The priest stands as the lone observer, mirroring the artistic trope of the lone wanderer in the landscape. Marius Becker/DPA

The appeal comes from looking at a scene that could cause discomfort (or estrangement, or isolation) but doesn’t. The viewer is looking at a representation of the scene, not the scene itself, from a position of far-off comfort. 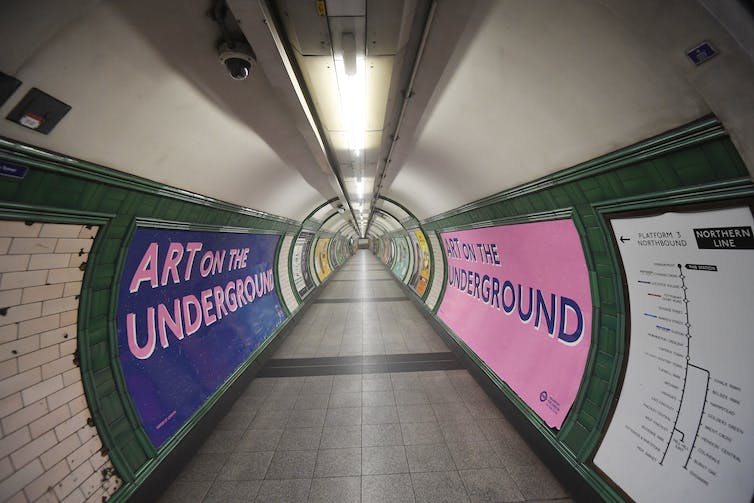 The London underground on March 16 2020 seems to stretch out forever. Facundo Arrizabalaga/EPA

Morally compromised as outsiders, we aestheticise a picture of another’s decline while looking away from factors that contribute to crisis.

The images in our current news feeds – despite what they say about coronavirus – offer similarly compelling visuals. We take delight in the formal composition of these images, which fall into tropes of the photographic picturesque. 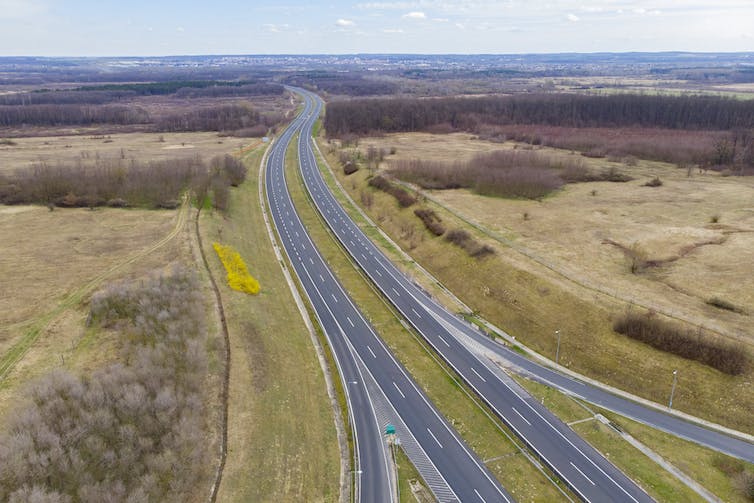 The empty M7 motorway in Hungary, March 14 2020. A posthuman, dystopian view of the world without us. Gyorgy Varga/Hungary Out/EPA

The absence of people provides us with the ability to see into the distance with endless visual perspective. We feel as though we are alone in the landscape, a heroic adventurer.

Why is our absence from the world so fascinating to view in photographs?

In the early era of photography, anything moving would be rendered invisible, while architecture (or a corpse) was the perfect still subject. Take for instance Daguerre’s 1839 photograph of the Boulevard du Temple, Paris, a bustling city street. 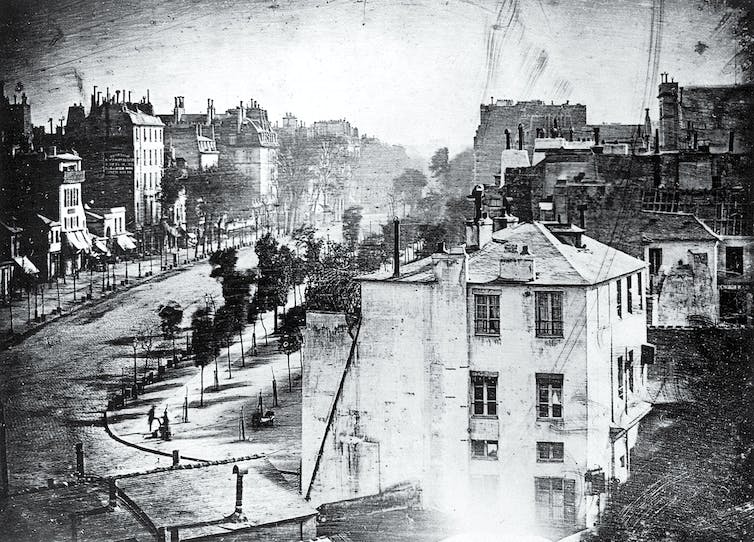 In this photograph, the street appears empty – with the exception of two figures who have stood still long enough to be captured by the exposure time required to portray the scene.

Photographs have always provided us with an alternative view of the world without us. 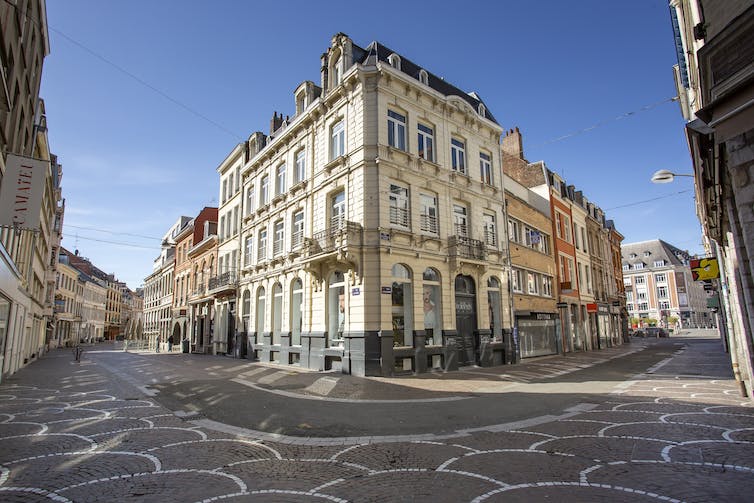 The streets of France are photographed empty again, here in Lille on March 17 2020. Sebastien Courdji/EPA

These artists demonstrate a longstanding fascination with photographing architecture devoid of human subjects. 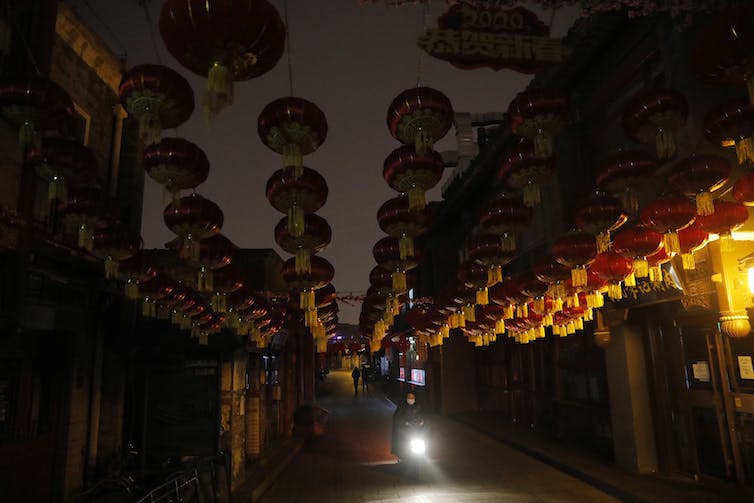 Houhai Bar Street in Beijing, China, February 20 2020, known for its bright lights and nightlife, is now dark and near deserted. Wu Hong/EPA

This fascination may be due to what architectural historian Anthony Vidler described as “the architectural uncanny”. Abandoned and deserted spaces, he said, make our familiar spaces become unfamiliar.

For Vidler, this estrangement from space hinges on visual representation such as in photography.

These photographs of empty public spaces capture a departure from our everyday and instead visualise this uncanniness: an alternative reality emptied of our presence.

Would be sinister, disturbing, suspect, strange; it would be characterised better as “dread” than terror, deriving its force from its very inexplicability, its sense of lurking unease, rather than from any clearly defined source of fear – an uncomfortable sense of haunting rather than a present apparition. 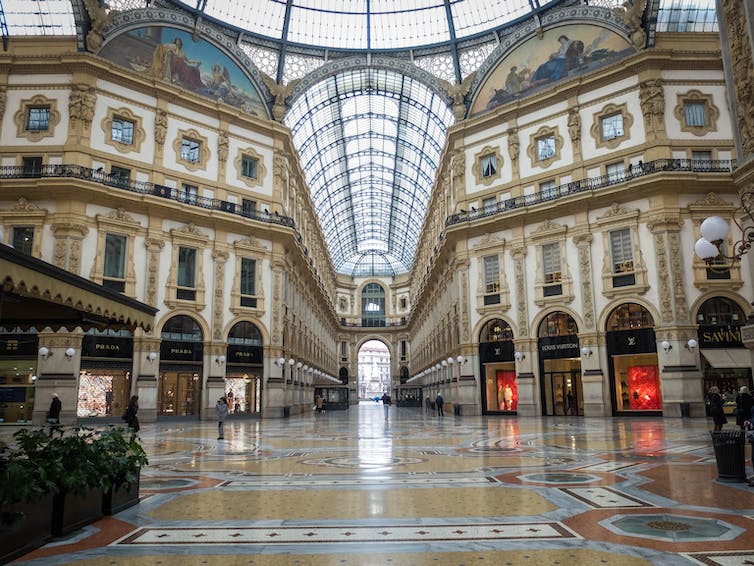 While we hide away and quarantine ourselves indoors, the world outside is captured in the collective imaginary as eerily without us. What we thought we knew of public spaces is instead evoking the sensation of being alone in a haunted house.

In images where we expect to see hundreds or thousands of people, we find instead a few lonely figures presented to us by a single observer: the camera. 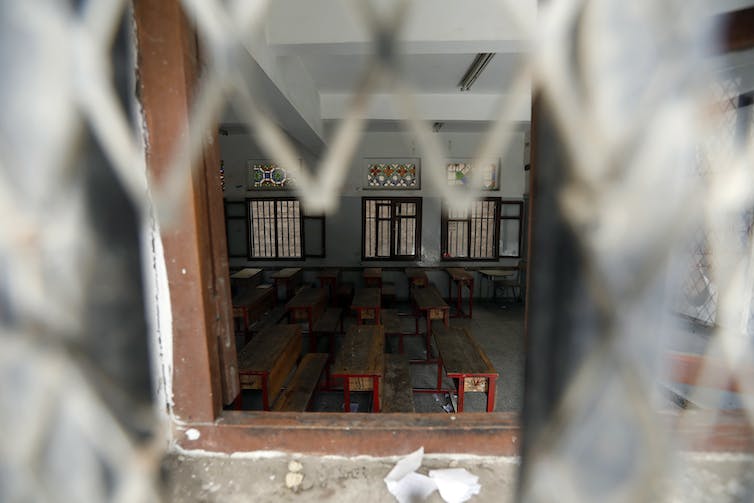 An empty classroom in Sanaa, Yemen, March 15 2020, with traces of torn paper on the parapet. Yahya Arhab/EPA

The Italian painter Giorgio de Chirico captured this in his 1913 painting Melancholy of a Beautiful Day where an ominous figure stands alone in an empty town street accompanied only by his shadow and a Roman statue in the distance.

Made over a century ago, de Chirico’s painting surprisingly resonates with the photographs we are seeing in the news today. While it offers a historical example of the surrealist fascination with psychological dream states, it is also prescient of our current reality. 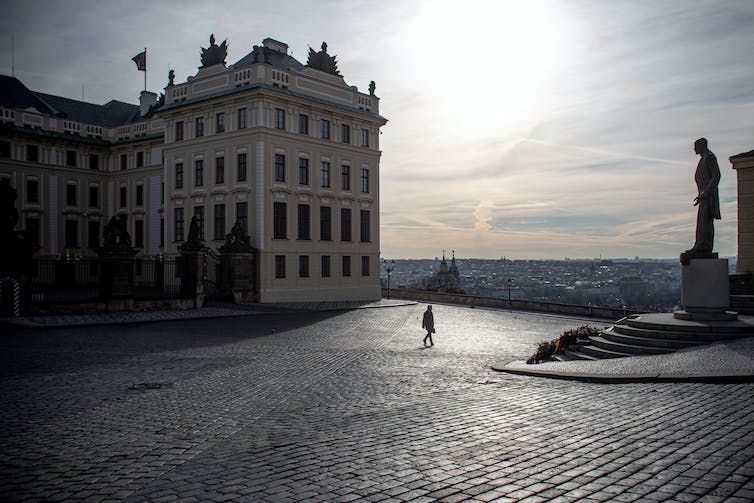 The images being captured by news photographers point to our fear of the pandemic and, fundamentally, of each other.

The photographs expose how swiftly we can become estranged from our everyday lives, how our surroundings can suddenly become something other – something fragile and tenuous.

The empty shelves, the empty restaurants, the grounded planes, the empty airports, the depopulated Mecca without worshippers, Trafalgar Square without tourists: these are all signals of the slowing of progress. 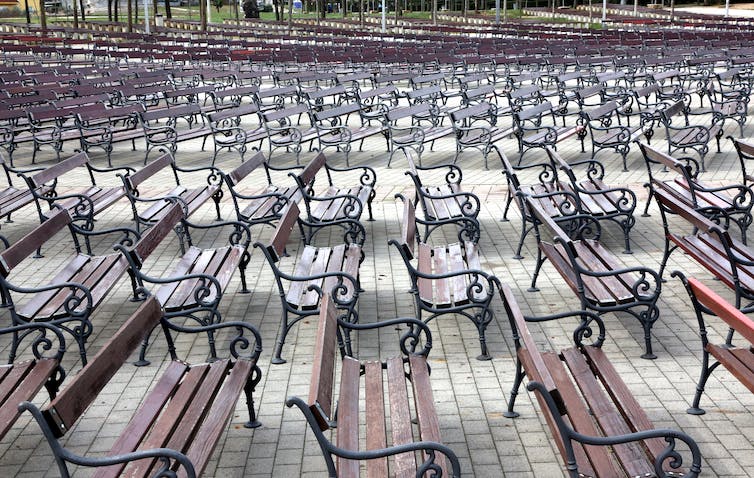 The deserted amphitheatre at one of the largest Catholic shrines in the world, in the village of Medjugorje, Bosnia and Herzegovina, March 11 2020. Devoid of human subjects, the chairs take on a life of their own. Fehim Demir/EPA

Photography is so good at capturing this because it is an unmediated mechanical eye that confronts our all-too-human eye. In these instances, the camera is able to be where we cannot be.

The mechanical eye is further exaggerated in the photographs which provide us with a distinctly nonhuman view of open, empty spaces.

Drone images give us an aerial perspective not readily available to the human eye. When viewed in the context of a global health crisis, there is no mistaking that we are – somewhat strangely – bearing witness to our own erasure. 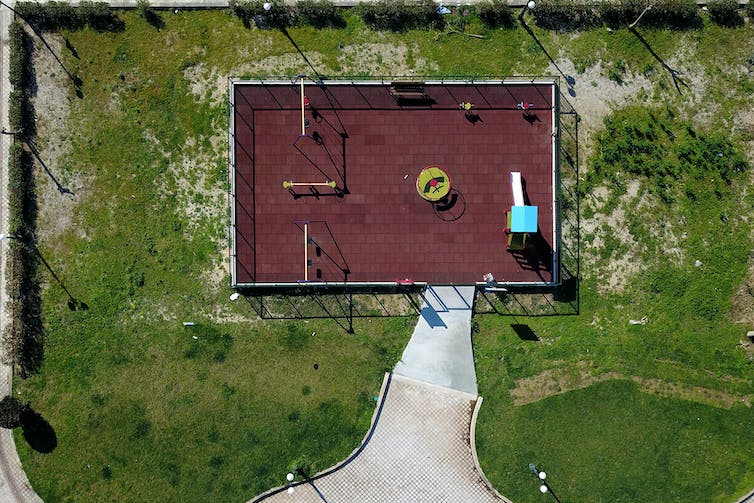 We are accustomed to seeing images of crisis represented by fires, floods, bombs, warfare. The photographs we see as a result of COVID-19 are an emptying out and a slowing down.

This is a different sort of crisis, one that is mirrored in the uncertainty and slowing down of our financial markets and the need for government stimulus packages. 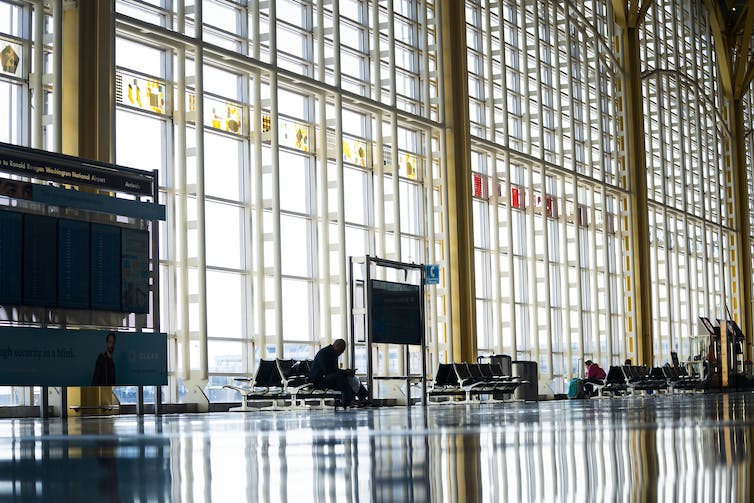 An unusually quiet Ronald Reagan Washington National Airport in Arlington, Virginia, USA, March 13 2020. In the absence of travellers, the image foregrounds the qualities of the architecture. Jim Lo Scalzo/EPA

Perhaps this is precisely what these photographs are showing us: how the pandemic paradigm of “social distancing”, which isolates us physically from each other, disrupts and stops our lifestyles.

The pausing or end of our gathering in public, in airports and hotels, at tourist sites and sporting matches, in shopping malls, museums and bars, signals a rupture to the flow of everyday life. 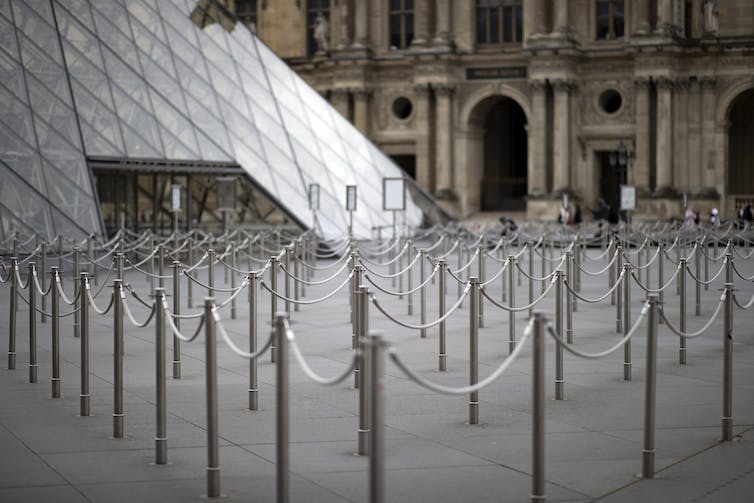 The deserted entrance to the Louvre, captured March 14 2020, shows Paris empty again. The bollards stand in rows where visitors to the museum would ordinarily queue. Ian Langsdon/EPA

Photographs of empty public spaces unmask the illusion that we are integral to existence. Even without a camera operator, optical technology will linger on and capture scenes of the world without presence.

Who can say whether that operator is human, or nonhuman, like a satellite from outer space that is still programmed to picture our buildings even if we aren’t in them? 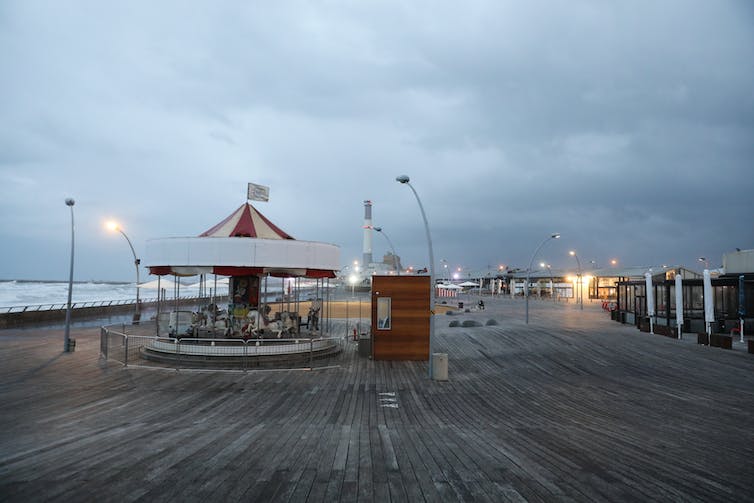 The empty port of Tel Aviv, Israel, March 17 2020. The world will continue on without us. Abir Sultan/EPA