Australia has just experienced a summer of environmental extremes. Water has played a key role. This includes prolonged drought, dry soil and bushland contributing to bushfires, and widespread shortages of water for agriculture and drinking supplies. Thankfully, rain extinguished many bushfires that had burned for weeks and months.

Australia has just experienced a summer of environmental extremes. Water has played a key role. This includes prolonged drought, dry soil and bushland contributing to bushfires, and widespread shortages of water for agriculture and drinking supplies. Thankfully, rain extinguished many bushfires that had burned for weeks and months.

The late summer heavy rain fell in some, but not all, regions. Australia’s capital city water supplies have had different fortunes this summer. The Bureau of Meteorology “water dashboard” provides daily data.

Read more: After a summer of extremes, here's what to expect this autumn

Cities where storages are low

Five capital city water supplies dropped over summer by between 2.2% and 11.4% of their storage capacity.

Hobart has proportionally dropped the most, by 11.4 percentage points, to 59.8%. This reflects relatively small storages and the city’s dry summer with only 65mm of rain. That’s less than half the historic average.

The Adelaide storages fell by 8.4 points to 43.5%. Adelaide had a typical dry summer with 66mm. That’s close to the historic average, as the city has a Mediterranean climate with hot and dry summers.

Adelaide’s water storages provided only 10% of the city’s water supply in 2018-19, with 83% drawn from the Murray River. The Commonwealth is providing nearly A$100 million for Adelaide’s desalination plant. This aims to allow upstream irrigators to grow fodder with the river water that was destined for Adelaide.

Read more: Cities turn to desalination for water security, but at what cost?

Perth has had another dry summer. Its catchment rivers have supplied only 44.1 gigalitres (GL) of water since April 2019. This is much lower than the long-term pre-1975 average of 413GL over the same time period.

Perth water storages fell by 5.7 percentage points this summer to 39.5%, the lowest of all capital city supplies.

Despite the falling reserves, Canberra’s Icon Water has not imposed water restrictions. It advises that the Cotter Dam was enlarged in 2013. Icon Water can also draw “top-up” water from the Murrumbidgee River.

Darwin’s supply was close to full as recently as April 2018. Since then it has been on a downward trend. A modest 6.4% gain over this summer’s wet season took it to 60.3%.

Darwin appears to be having its second poor wet season in a row. The city had 675mm of rain (Darwin Airport) this summer. That’s about 67% of its historic summer average of just over 1,000mm.

Options canvassed for increasing Darwin water supply include using Manton Dam, which was built in the 1940s but is now used for recreation.

Sydney was distressed by its dwindling water supplies as summer approached. Storages were at 45.7% at the start of December. Level 2 water restrictions were imposed from December 10.

These were the toughest summer water restrictions for an Australian capital city. All use of hoses for gardens and washing cars was banned. Many Sydneysiders struggled to keep their gardens alive, lugging around buckets and watering cans. A catchcry across Sydney was “let your lawn die”.

On February 6 2020, heavy rains started falling in coastal southeastern Australia, including Sydney and its water catchments.

Read more: Heavy rains are great news for Sydney's dams, but they come with a big caveat

The automatic weather station at Mount Boyce, near Blackheath on the edge of the Warragamba Dam catchment, recorded 415mm in four days. From February 6-27 Sydney’s water storages nearly doubled, from 41.7% to nearly 82%. This added more than 1 million megalitres (ML), equivalent to more than 1.5 years’ demand.

On February 6, parched catchments were adding 10ML a day to Warragamba Dam. A week later the catchment rivers had risen and many were in minor flood, adding 65,000ML a day on February 13.

At the end of summer Sydney Water announced it was dropping level 2 restrictions. 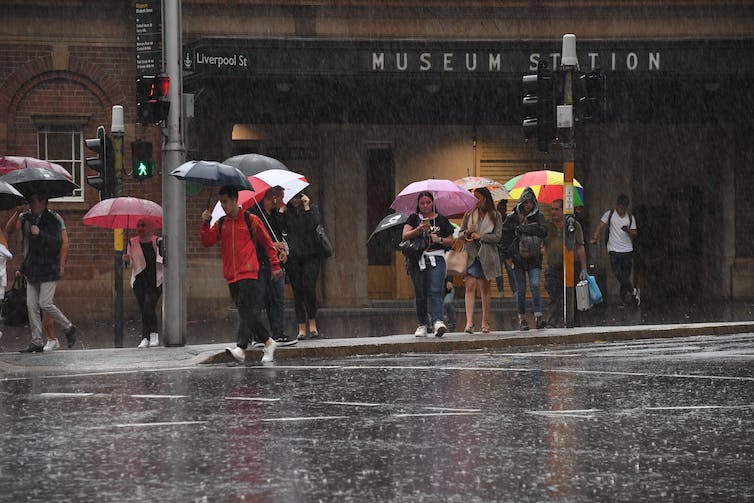 Some parts missed out

The February rains were patchy, however. Many water-stressed parts of New South Wales were not so lucky.

Orange in the state’s Central West remained on level 5 water restrictions all summer. Orange Council pleaded with residents to curb water use to less than 160 litres per person per day. Residents responded by using even less, averaging 126 litres a day in February.

Nearby Bathurst declared “extreme” water restrictions from February 24. Its main storage, Chifley Dam, is just under 30% and also had a blue-green algae alert.

Chaffey Dam provides drinking water to the Tamworth area and sits at just 14.3%. Over summer it received over 800ML but has to balance this inflow with environmental releases. Tamworth remains on level 5 restrictions. If Chaffey Dam drops below 10% a daily target of 100 litres per person looms.

A cause for concern is that many large NSW irrigation dams across the Murray-Darling River system remain very low for the start of autumn. For example, Burrendong Dam near Dubbo was at 4.5% at the end of summer. This dam supplies water to the city via the Macquarie River.

The Macquarie River also supplies other settlements, irrigators and industry, such as the mines at Cobar.

Flooding rains in inland Queensland are returning healthy flows to dry inland rivers such as the Barwon and the Darling. On February 25, Bourke Shire Council announced happy news that “strong flows in the Darling River” allowed the lifting of water restrictions. Bourke residents had endured water restrictions for more than 550 days.