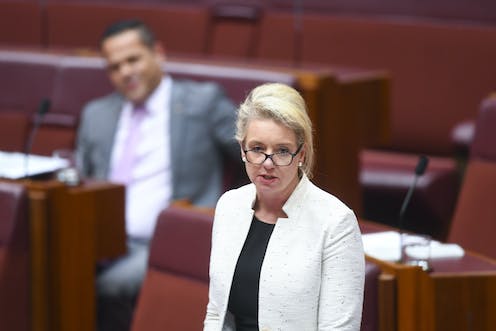 Bridget McKenzie’s future is looking bleak, her position having worsened significantly this week.

At its heart, the McKenzie affair is simple. Before last year’s election, the then-sports minister allocated grants to sporting organisations on an overtly political basis, rather than following the objective ranking determined by an assessment process under the program’s guidelines.

It was a clear misuse of taxpayers’ money.

Defences the government offered after she was exposed in last week’s blunt Audit Office report were spurious.

It insisted, for instance, this was different from the notorious “sports rorts” affair that claimed Keating government minister Ros Kelly, who’d famously used a “great big whiteboard” in her pork-barrelling operation. The truth is, it’s little different.

This week Nine newspapers revealed McKenzie had been given membership of a gun club she funded, and she failed to comply with declaration-of-interest provisions.

Prime Minister Scott Morrison could find it easier to get rid of McKenzie on the grounds of this non-disclosure than for rorting the grants scheme, which would involve the government admitting the impropriety of a pretty endemic practice.

The statement of ministerial standards, which covers disclosure, says a minister

may be required to resign if the prime minister is satisfied that they have breached or failed to comply with these standards in a substantive and material manner.

Prime ministers these days hate giving scalps to the opposition. And McKenzie’s blond head has certain layers of protection.

She’s in cabinet not because she’s Morrison’s pick but as deputy leader of the Nationals, elected by her party. Unless Nationals’ leader Michael McCormack consented, Morrison could be stirring trouble with the junior Coalition partner if he insisted she go.

The Nationals could say: what about Liberal Energy Minister Angus Taylor, who’s mired in the mess of an allegedly forged document, currently being investigated by the federal police?

Also, in distributing grants on a political basis McKenzie was likely acting according to the expectations of others around the government. MPs were lobbying for sporting organisations in their electorates. Morrison has admitted his office would have passed on representations.

The fact McKenzie is a senior woman adds to the political difficulty.

The prime minister has launched a couple of investigations into the affair.

Attorney-General Christian Porter is obtaining advice on whether McKienzie actually had the legal power to make the decisions herself – a question raised but not answered in the Audit Office report.

Crucially, Phil Gaetjens, secretary of the Prime Minister’s department, is examining whether she has breached the ministerial code (which on any ordinary reading she certainly has).

Everything is suddenly hanging on the Gaetjens’ probe. Morrison, who seems to have now noticeably distanced himself from McKenzie, said on Thursday: “I will look at that [Gaetjens] advice and take whatever action is necessary”.

Offsetting the downsides of ditching a senior minister, there could be benefits for the government if McKenzie went, beyond lancing this nasty boil.

There’s been speculation it could open the question of McCormack’s leadership but that’s unlikely.

McKenzie, who’s been a poor performer, has sharp critics within her own party. If the Nationals made Water Resources Minister David Littleproud deputy and McCormack promoted one of the women newly elected last year (for example Perin Davey or Susan McDonald, both senators like McKenzie) that could strengthen their frontbench.

The removal of McKenzie would also provide the opportunity for a ministerial reshuffle, and a chance to shift Taylor. But would Morrison feel constrained, unwilling to concede a point to Taylor’s critics? Some say so.

Parliament meets the week after next, with the government in bad shape, thanks to Morrison’s missteps during the fires, the government’s defensiveness on climate change and the ministerial scandals.

Morrison has taken a predictable polling hit in the wake of his Hawaiian holiday and subsequent problems.

The longer-term risk for him is that some, perhaps many, voters have re-thought the generally positive views they had of him before the election. This goes deeper than just immediate criticism.

We can’t know whether he can erase this negative perception. But it does call for a rethink about his prime ministerial durability.

Remember how after his unexpected May victory there was much talk about Morrison being in the box seat for the 2022 election? Recent events suggest bets at least should be more heavily hedged.

Memories of Kelly also bring to mind the experience of Prime Minister Paul Keating. Like Morrison, Keating performed the political “miracle” of triumphing at what had appeared an unwinnable election.

In the same way as Morrison a generation later, Keating won in 1993 through his sheer ability as a campaigner, bolstered by the personal and policy vulnerability of his opponent.

But then Keating lost (by a big margin) in 1996. He’d dodged a bullet in 1993, but the electorate kept the gun loaded and fired when it saw no good reasons against doing so.

Few recent prime ministers have proved durable, even when they appeared set up to be.

Bob Hawke was, and John Howard too. But Kevin Rudd, after a strong win in 2007, was brought down in a party coup before he could fight the following election. It was all too late by the time Labor reluctantly reinstalled him, to replace the undurable Julia Gillard.

Tony Abbott followed the path of Rudd, winning from opposition only to be removed before the next election.

One might have expected the popular Malcolm Turnbull to have lasted. But no; after doing badly in 2016 he was ousted in 2018.

Morrison is fortunate on several fronts. His current troubles are early in the parliamentary term. A rule change he executed in the run-up to the election protects him from being brought down in a coup. Anyway, he hasn’t a rival hunting him.

On the other hand, despite being a relatively new PM, he is leading a government in its third term.

Morrison has plenty of time and opportunity to recover. But if the next election goes to Labor, this summer of actual and political disaster might be looked back upon as a decisive turning point.