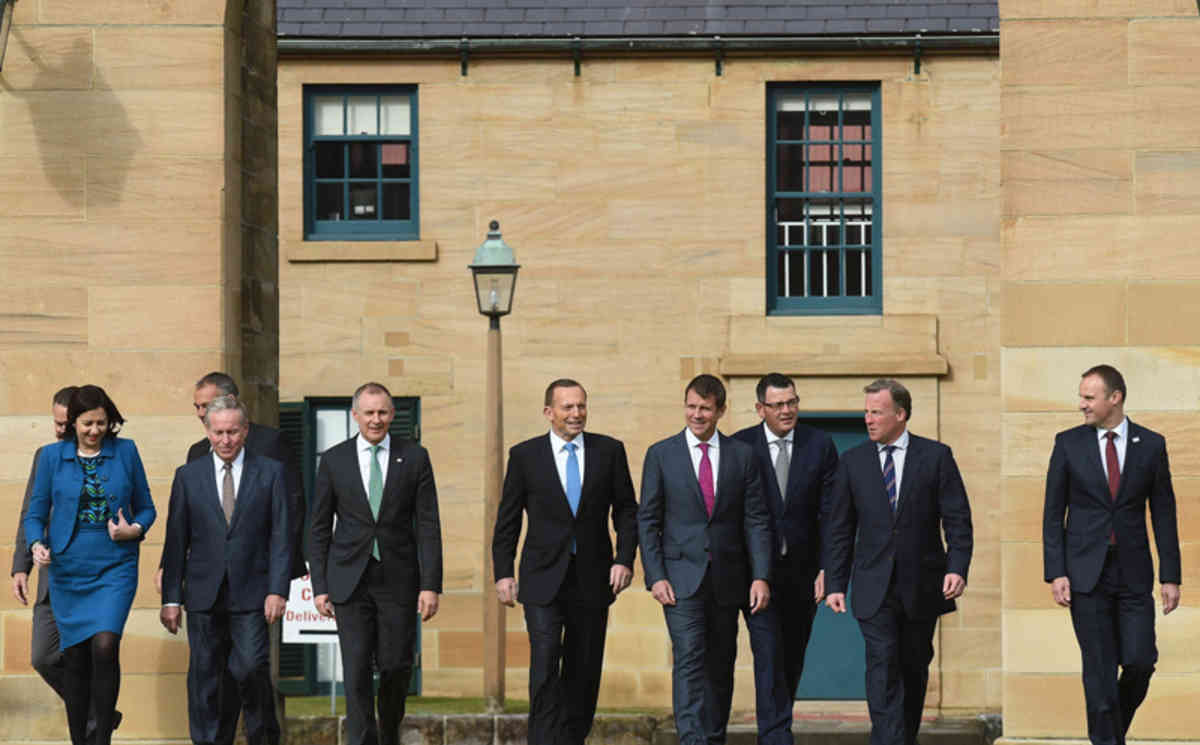 Sydney 23 July 2015. The nation’s leaders have taken the first steps towards major reform of Australia’s Federation.

The Prime Minister, First Ministers from each State and Territory, and the President of the Australian Local Government Association (ALGA) gathered at Victoria Barracks in Sydney yesterday for an historic first  Leaders’ Retreat.

Following presentations from the Expert Panel, the Leaders discussed the challenges facing Australia as we strive to deliver improved health services, new infrastructure, fair and affordable access to housing, training designed for real jobs and a school education system that helps Australian children stay ahead in a globally competitive world.

The key to providing the services Australians aspire to is a more productive and faster growing economy. Improving the way our Federation works will improve Australia’s overall fiscal position and our national productivity. Achieving this reform will require both the Commonwealth and the States to make policy changes that would both improve the climate for business, and ensure more efficient delivery of government services while keeping taxes as low as possible.

All Leaders agreed that the Federation reform process provided a rare opportunity to tackle these issues and that, if we didn’t, Australians would face the risk of declining services in the future.

Now is the time for leadership.

Now is the time for an honest and candid conversation with the Australian people about these issues.

Now is the time to bring forward a plan for Australia’s future, with party politics put aside, which examines the roles and responsibilities of the different levels of government.

The Leaders had an ambitious discussion about ways in which the Commonwealth and State Governments can cooperate more effectively to make major improvements in the delivery of services to all Australians.

The Leaders unanimously agreed to focus reform on health, education, infrastructure and housing.

While Australia has one of the most efficient healthcare systems in the world, Leaders agreed that health is a top priority for all levels of government with a serious funding challenge made more difficult by our ageing population. The NSW Premier delivered a presentation that highlighted the growing gap facing all states on health and hospitals funding. A new focus on primary care and keeping people out of hospital is necessary. When it comes to chronic care, the issue of diabetes, heart disease and mental health require particular attention. There was also recognition of the need to consider working towards extending Medicare to cover treatments in hospitals based on efficient pricing.

Despite considerable increases in resources in recent years, Australian students are falling behind their international counterparts. We must arrest this decline. Increasingly, childcare is the delivery mechanism for early childhood learning. Leaders committed to improving the transition from early childhood learning to school including consideration of an earlier start to school, greater equity in the application of childcare funding to learning for the year before school and improving the standard of teachers which is critical to delivering better educational outcomes.

A better trained workforce is essential to grow our economy and create jobs but there is a misalignment between the jobs we train people for and the jobs business needs doing. We must reform the vocational education and training sector so that training helps young people get jobs when they finish, as well as providing real pathways for older workers to transition between careers. Leaders committed to change that will see a more demand driven system, greater engagement with business about their skills needs to deal with emerging industries and new ways to help support students. Leaders agreed to consider a shift in responsibility for VET to the Commonwealth provided States and Territories could elect to remain TAFE providers within a national system.

Leaders agreed that infrastructure was critical to how people live and move around our cities and regions. Local governments also play a role in the Federation by delivering services and infrastructure at the local level with important funding contributions from the Commonwealth and within a legislative and regulatory framework provided by the states and territories.

In relation to housing, Leaders focussed on greater access to affordable housing, increasing supply and better access for vulnerable people to social housing. The Leaders also recognised that a place to call home was a fundamental human need. There was agreement to look at ways to reduce spending duplication between the Commonwealth State Housing Agreements and the Federal Government’s provision of rental assistance to low income people.

Leaders also noted that despite these reforms, there will be a significant gap between the resources necessary to maintain and improve services into the future, and the revenue currently available.

There was a unanimous commitment among Leaders that we need to confront these issues head on and keep an open mind on ways to better fund the needs of our citizens. Taken in parallel with the Tax White Paper, Leaders agreed there is an opportunity to consider more durable revenue arrangements to address growing financial pressures facing all governments. Any revenue arrangements need to be fair, efficient and lasting.

All Leaders agreed to keep Commonwealth and State tax changes on the table including the GST and the Medicare levy. As a first step, there was agreement in principle by Leaders to broaden the GST to cover overseas online transactions under $1000. This matter will be referred to the upcoming meeting of Treasurers to progress in detail.

Leaders also supported the Northern Territory Chief Minister’s resolve for the NT to become Australia’s seventh state by 1 July 2018. The Chief Minister will report on progress at the next meeting of COAG.

At the next meeting before the end of the year, Leaders will consider more developed options to progress the reform directions agreed at yesterday’s historic Leaders’ Retreat. Between now and then, reforms will be progressed by individual Leaders informed by the Expert Panel: School Education (QLD Premier and ACT Chief Minister), Health (Victorian and Tasmanian Premiers), Training (WA and Victorian Premiers), Revenue and Housing (NSW and QLD Premiers), Early Childhood Learning (SA Premier, NT Chief Minister and the President of the Australian Local Government Association ALGA) and in addition, Indigenous (NT Chief Minister and WA Premier).

This is an ambitious agenda and one that will take time to fully implement however we are determined to clearly communicate the scale of the challenges facing our country and encourage the community to join us in this national discussion. Leaders are determined to leave the Federation in better shape than they found it and to ensure that taxpayers’ dollars are used in the most efficient way possible so that future generations of Australians can enjoy the world’s best standard of living.