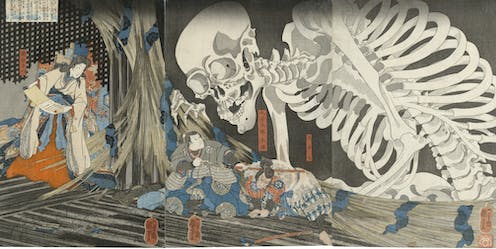 Sometimes life appears incomprehensible, of another world. The supernatural has been evoked in many cultures and religions as a way to make sense of the thresholds of mortal and immortal worlds through images and stories.

Sometimes life appears incomprehensible, of another world. The supernatural has been evoked in many cultures and religions as a way to make sense of the thresholds of mortal and immortal worlds through images and stories.

For some, the supernatural can help make sense of the irrationality of life. For others, it gives context for the textures of grief. And for others still, it provides continuity in the afterlife. 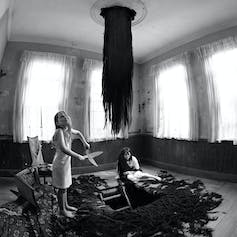 Japan supernatural, a new exhibition at the Art Gallery of NSW, surveys the complex, playful and inventive ways Japanese culture has visualised these themes from the 1700s to today.

Connection to the everyday

Defining the supernatural is a difficult task — reflecting our contested mortal and moral understandings. Japan has a compelling history of bringing the mystical to life — from the evocative woodcut prints of scholar, poet and artist Toriyama Sekien (1712–88), to the powerful storytelling of Hayao Miyazaki (of Spirited Away animated film fame) and the “superflat” popular character reinventions of Takashi Murakami.

In Japan — informed by Shinto beliefs around notions of animism — a soul (“reikon”) lives within all existence and phenomena. Everyday things — from objects to plants to mountains — can be defined as “kami” or deities.

This connection between the natural and spiritual worlds creates a complex understanding and respect for the everyday. Cups can be vessels for long lost ancestors. Would you throw out a cup if it could contain the spirit of your long lost grandmother?

Indeed, both personal and global lessons can be learnt from the animism appreciation of the environment in the face of current Anthropocene challenges.

The Japan supernatural exhibition begins from the Edo Period (1603–1868) and spans three centuries to contemporary manifestations. Stories highlighting the enduring power of the supernatural to understand the limits and potential of humanity are included.

Concepts such as yōkai — which in English translates roughly to monsters, goblins, demons and spirits — often take the form of everyday animals or objects. The prolific and prescient work of Sekien’s 18th century prints and books gives yōkai a creolised character face that manages to inspire both delight and fear. 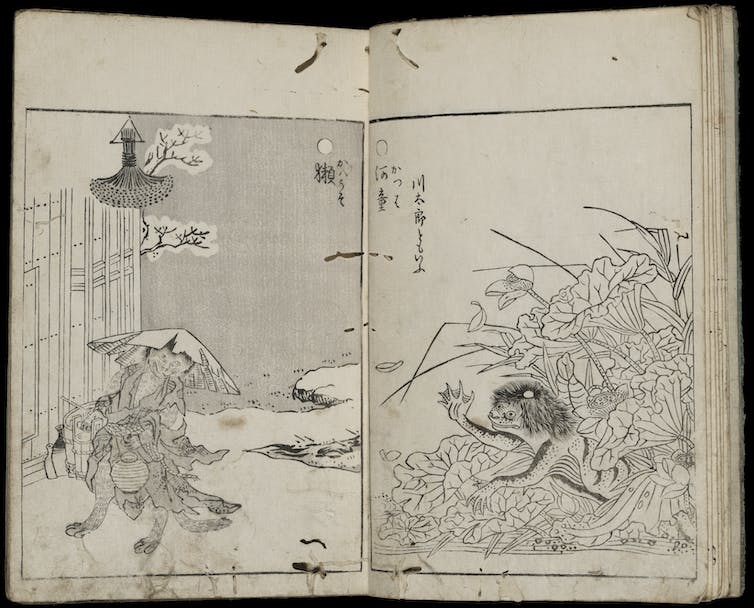 In Japan, the yōkai have long been deployed in art and culture as a way to reflect upon morality and mortality. As anthropologist Komatsu Kazuhiko notes in the exhibition catalogue, the yōkai has gained long overdue scholarly attention in recent decades.

“Japan’s yōkai culture is extraordinarily rich,” he writes. “One aspect of yōkai culture relates to religious and spiritual history, another to the arts, including literature, the visual arts, theatre and popular entertainment”.

Japanese supernatural forms frequently change and transform. Only some of these transformative concepts translate into English: bakemono means “changing thing”, mononoke means “things that transform”, and yurei is the Japanese word for ghosts.

Yet art can unlock different cultural perceptions and understandings of otherworldly shapeshifters that go beyond language.

Takashi Murakami’s grand scale painting: Vertiginous After Staring at the Empty World Too Intensely, I Found Myself Trapped in the Realm of Lurking Ghosts and Monsters (2019). Photo: Kaikai Kiki/Art Gallery of NSW

The haunting presence of the spectral across the centuries creates and curates a different sense of time throughout this exhibition.

The work of Seiken can be found in director Isao Takahata’s woodblocks for the 1994 Studio Ghibli animation Pom Pok. And the exhibition includes key masters of the Ukiyo-e Period from the 17th to 19th century, such as Katsushika Hokusai who is famous for the timeless print The Great Wave.

The supernatural in Japan is all-pervasive, playing out in curious ways. For instance, anthropologist Anne Allison has been exploring the emerging Shinto-inspired death industries in Japan. 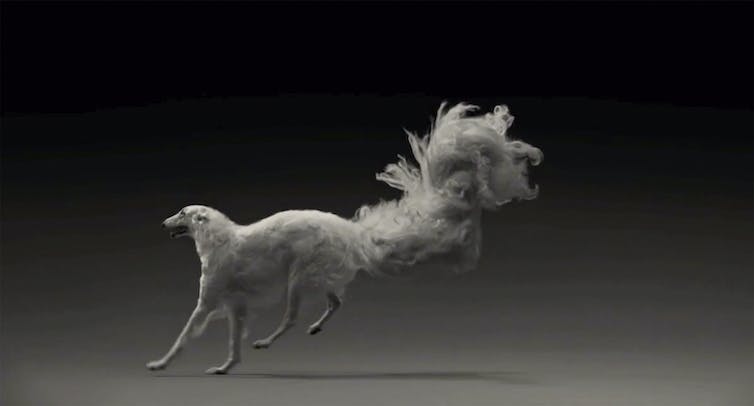 Regeneration of a breached thought (2012) by Fuyuko Matsui. Art Gallery of NSW

Funerals and cemeteries for people without families are emerging. Elderly Japanese people are meeting the strangers they will be buried near — some moving across Tokyo to live with their “grave friends” in this lifetime.

This continuity with life, death and afterlife could teach us plenty about the supernatural in our everyday lives; how to better understand one another, the environment around us, and perhaps even to comprehend the incomprehensible.

Japan supernatural runs 2 November to 8 March at the Art Gallery of NSW.