In the dramatic account of the raid and killing of Islamic State leader Abu Bakr al-Baghdadi, one thing captured widespread attention. A military working dog was singled out for praise, reportedly chasing al-Baghdadi down a tunnel before the IS leader detonated a suicide vest, killing himself and his three children.

The Joint Chiefs acknowledged the dog was “slightly wounded and fully recovering” and still on active duty.

Dogs used by militaries around the world are seen as vital assets to military operations, with close bonds created between dogs and their handlers. Many descriptions of military working dogs describe them as fellow soldiers, no different in treatment, status and respect, than their human counterparts.

So it’s interesting that the legal frameworks governing militaries and the operation of armed conflict have so little to say about the use, protection, or treatment of animals during war. This gap is particularly notable as the use of animals as soldiers is nothing new.

This isn’t the first dog to become famous with such raids. Cairo was a lauded member of Operation Neptune Spear, the US Navy SEALs operation that resulted in the death of Osama bin Laden.

But the history of the use of animals in warfare goes back further. Dogs were recorded in warfare as early as 600 BCE, and mentioned in the works of Homer, Herodotus, and Polynaeus. And while technological advancements have reduced the need for many species to be used by militaries, dogs are still seen as vital to their work.

The Australian Defence Forces extensively use dogs in their operations, and for many purposes. This includes sniffing out explosive devices, detecting narcotics, locating the wounded, and patrolling and protecting missions and bases.

The RAAF has been trialling a welfare dog program, placing dogs with chaplains to serve as therapy animals for deployed soldiers, in association with the Young Diggers Dog Squad.

In 2017, the Australian Defence Force commissioned the Canine Operational Service Medal, becoming the first military in the world specifically to honour the contributions made by military working dogs.

The medal is emblazoned with the image of Quake, an army combat assault dog, who died on operation in Afghanistan in 2012.

Military dogs are ‘equipment’, at best

The close bonds formed between military dogs, their handlers, and their units – and the hero status the public is eager to give these dogs – is not reflected in their legal status during armed conflicts.

In the United States, military dogs are labelled as “equipment”. A bill was introduced in 2012 to reclassify them as “canine members of the armed force”, but this bill ultimately lapsed without being passed into law. In practice, they are treated as noncommissioned officers, and given higher ranks than their handlers to ensure respect. But this is symbolic and brings with it no legal protection when in the theatre of war.

In Australia, the status of military working dogs is not addressed in legislation. But on the public-facing website of the Air Force, they’re placed under the category of “technology”, alongside bushmasters and fire trucks.

The medal awarded to military dogs when they’re very good. Department of Defence

This classification as “things” comes at a time when much attention is being given to the status and rights of animals in many parts of the world, and a move away from classifying animals as property. The ACT has just passed law recognising animal sentience, acknowledging their ability to feel pain and to perceive the world around them.

The international law governing war – known as international humanitarian law or the laws of war – says even less. Despite the long history of animals used in warfare, there is not a single reference to the use of dogs or any other animal during war.

This silence does have consequences for military working dogs, beyond just outdated perceptions of non-human species.

International humanitarian law is largely premised on a fundamental distinction between combatants and civilians.

The laws of war also provide protections for combatants to not be targeted in circumstances where they are surrendering, wounded, and provide for special protections for prisoners of war.

If dogs are nothing more than military equipment, then neither the protections of combatant or civilian status apply - they can be targeted and destroyed as if any piece of inanimate military gear. 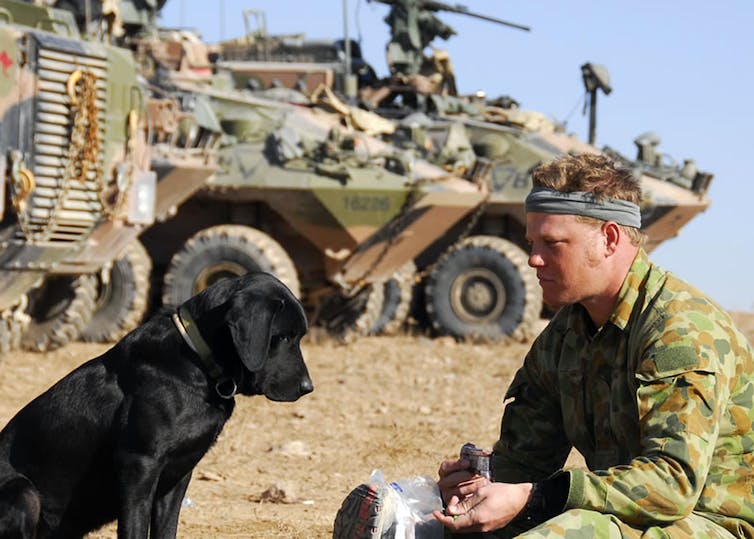 A black Labrador military dog eyes an Australian digger’s snack in Korea. Military dogs are given no legal protection during conflict. AAP Image/Supplied

If equipment or technology, then there is no obligation to treat them with respect if captured or wounded.

For example, there is no international law in place prohibiting the use of dogs, as they were used by the Soviets in World War II and beyond, as suicide bombers.

The solution isn’t as simple as recognising dogs having the same combatant status as humans.

Combatants must comply with the rules of international humanitarian law. This means they commit, at all times, to distinguish between civilians and combatants, to not attack the wounded, and more.

Military working dogs are unlikely to be able to fully and independently comply with this large body of law. What’s needed are protections specifically targeting their role in armed conflicts.

The animal rights movement still has a long way to go when it comes to a universal recognition of the personhood of animals generally, and the laws of war are just a small facet of the bigger picture.

But the simultaneous treatment of dogs who are used on battlefields and in operations as heroes, while offering none of the legal protections given to their human counterparts, shows an irreconcilable dilemma in our current approach.