One evening last month, the young man from Afghanistan, of Hazara ethnicity, arrived in Jakarta. His people-smuggler dropped him at the UNHCR entrance reserved for refugees, where he was told to wait.

The next day, mid-morning, he was still outside waiting to speak to someone. He was too afraid to give me his name or even his age, but he appeared...

One evening last month, the young man from Afghanistan, of Hazara ethnicity, arrived in Jakarta. His people-smuggler dropped him at the UNHCR entrance reserved for refugees, where he was told to wait.

The next day, mid-morning, he was still outside waiting to speak to someone. He was too afraid to give me his name or even his age, but he appeared to be in his early 20s.

He had been fleeing for 20 days, ten days hiding in wait in Kabul, then another ten days in transit through three countries. His choice to come to Indonesia was based solely on escaping immediately.

Through a translator he said:

I needed to get out quick. I just wanted to come as soon as possible so I came through an agent. My agent brought me here, I have no shelter so I am just waiting for the UNHCR for information.

Read more: Refugee-run school in Indonesia a model for governments to emulate

I’ve been working with a refugee-run school in Indonesia for the past year. There, refugees aren’t allowed access to education or work, and asylum seekers can be arrested at the whim of authorities. This, compounded with chronic waiting, has led to a straining relationship with the UNHCR, the key institution in their lives.

Only 509 of 14,016 people (3.5%) were resettled in Indonesia last year. Of those , only 84 came to Australia. And so far this year, the number of people resettled from Indonesia to Australia is just eight.

Figures like these explain why, for many months now, the UNHCR office in Jakarta has been the subject of ongoing protests made up of street protests outside the building in the city centre and civil disobedience in the upscale suburb of Kalideres. Refugees and asylum seekers have refused to vacate a disused military building temporarily allocated to them.

Refugees argue the very existence of the UNHCR Jakarta office is a kind of false advertising.

Twenty-four-year-old Ali Jawad Haidari has been in Indonesia for over seven years. He said:

At Kalideres, the broken trust is visceral. People question the staff’s willingness to prosecute cases, and why they visited Kalideres with security guards when there was never a hint of violence in the months of protest (and for that matter, why they were not allowed to enter the main UNHCR building through the front door).

They also questioned the ethics of the UNHCR, when the institution offered a one-off payment of roughly a month’s living expenses to the refugees in exchange for leaving the Kalideres site. The refugees initially thought this would be the beginning of ongoing UNHCR support.

And they questioned why the agency supposed to protect them would turn off their electricity and water.

Read more: Over a month on in post-election Australia: No mercy for refugees in Indonesia

In fact, “The UNHCR is making me sick” is a refrain I heard multiple times during interviews.

Hassan Ramazan, a spokesperson for the Hazara refugees at Kalideres, said the sit-in protests exist because their community and the relatives who support them by sending cash, are at breaking point. He said:

The refugees who wait

Ramazan also points to the seeming arbitrariness of resettlement. Interview wait times to determine refugee status vary, with some who arrived more recently resettled than those who’ve been waiting for years.

What’s more, single men believe they are treated with suspicion in western countries. Twenty-eight-year-old Muhammad Hanif is one of those single men, who received his refugee registration in 2013. He said:

Lots of singles have been here seven or eight years, we also pray for families to be resettled, but also for us, it should be fair.

And Haidari points out people may have arrived alone but are still family members – brothers, sons, fathers.

My friend arrived alone and is still waiting. Recently his 13-year-old son was injured in a bomb blast in Afghanistan, spent two months in hospital, and still the UNHCR said they can’t do anything.

My friend when he came here his son was six, now he’s 13-years-old and injured.

Waiting is a contemporary strategy of migration management.

But chronic waiting must be taken into account in refugee policy, as it causes and prolongs psycho-social damage and changes the nature of societal and institutional relationships.

Read more: The right to work can empower refugees in Malaysia

For the majority of refugees, chronic waiting is unlikely to result in effective protection unless a refugee’s country of origin becomes safe to return to. This is unlikely in the foreseeable future for the major refugee producing countries.

Even in countries with major refugee populations, their plight is mostly ignored.

But not always. In Malaysia – where the refugee population is ten times that of Indonesia and work has been informally accessed for years – there are moves to make work legal for refugees.

Work could help alleviate economic pressures and restore agency and dignity lost in waiting. But the refugees are keenly aware of Indonesia’s local poverty and insecure work conditions. And because Indonesia is not a signatory to the 1951 Refugee Convention, it is not obliged to look after refugees. 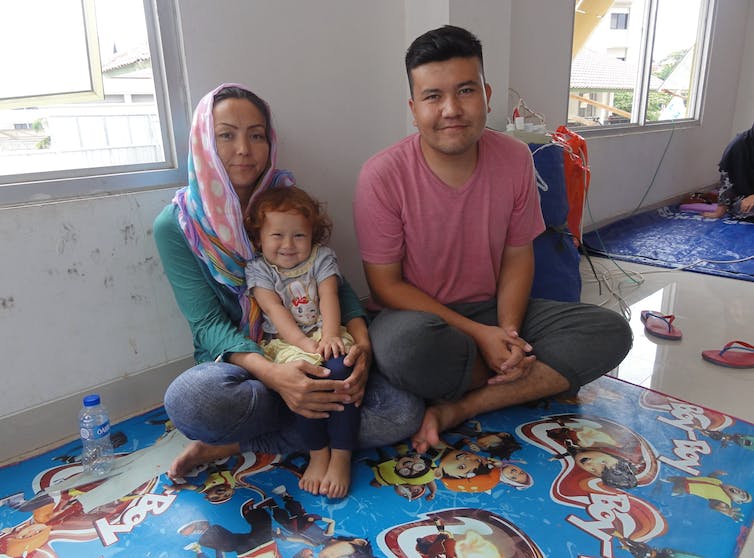 Masooma, her two-year-old daughter Zahra and her husband Ali are one of the families protesting in Kalideres. Author provided

Nevertheless, ways for refugees to sustain themselves are supposedly being discussed in Indonesia.

For Haidari, a martial arts champion, work would solve many of his problems. But the authorities have stopped him from competing. He said:

If I could just fight I would never knock on the UNHCR door again.

Refugee spokesperson Ramazan doesn’t see work rights as the ultimate solution, but he does ask what sort of generation is being created. They’re living on the streets, without access to education or the example of seeing their parents work.

Thirty-seven-year-old Masooma, who is in the Kalideres complex with her husband and two-year-old daughter, has another, pointed, question.

They say the first priority is for people with critical problems, who are sick, and that’s the reason resettlement is slow.

Since they don’t give us support and assistance of course we will get sick, and then what should we do with that process? What will we do if we get sick and then go to another country?

Essentially, there is no point in breaking people, then helping them.