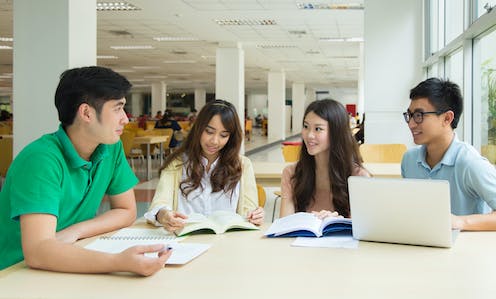 Chinese students with nationalist sentiments can be seen as agents of the Chinese Communist Party (CCP). Such concerns were particularly evident during reports of clashes at Australian and New Zealand universities between pro-CCP and pro-Hong Kong students.

In similar recent clashes in Sheffield, UK, onlookers claimed Chinese students were threatening citizens’ right to protest and freedom of speech. There have been concerns the Chinese government is extending its influence into Western universities, threatening academic freedom, freedom of speech and liberal values.

Confucius Institutes are criticised as tools through which the Chinese government spreads its propaganda under the guise of teaching Chinese culture and language. Chinese students who aggressively protect their country’s reputation may be lumped into the same category.

But research shows Chinese students come to Australia to study for much the same reasons as students from other countries – to gain a competitive edge over graduates in their home country by learning English and experiencing another culture.

Why students from China go overseas

While Chinese students study in Australia for many reasons, a recent study showed most were here for economic reasons. Having an international degree and English language skills can give job seekers an edge over their locally educated peers.

Acquiring permanent residency in Australia is also a common aim, although changes in policy are making this increasingly difficult. A 2010 study showed an American degree can also increase Chinese students’ social status in China.

A 2018 study of Chinese women studying in Australia showed studying abroad could be an opportunity to escape traditional expectations such as marrying early and having children. It also provides a chance for the students to explore their sexuality.

Chinese international students have grown up with this education and have benefited from the economic success of the China Model. Some students from China fear political change inside China could threaten the country’s stability. But this doesn’t automatically mean they are hostile to liberal values.

Some students believe democracy is suited to Western nations only, or that multi-party democracies are more responsive to citizen demands. Others may be supportive of democracy, but still see criticism of China as Western bias.

The CCP recognises that international education can have a liberalising impact on students. In response, it seeks to extend its influence over students abroad, especially by providing economic and employment incentives to international students who support the CCP on their return to China.

Chinese Students and Scholars Associations maintain links between the PRC and Chinese students by holding social events and emphasising patriotism.

Some students who engage in anti-CCP activities have reported being threatened by the CCP. One Chinese student, who discussed sensitive political issues on social media in the US, claimed she was questioned for hours by state security when she returned to China.

The CCP encourages overseas students to challenge liberal values and shape China’s global image. Some Chinese students have challenged Australian lecturers who criticise China. If these challenges become hostile, students and lecturers may avoid discussing contentious topics such as human rights, the status of Taiwan, or the Tienanmen protests.

But students who reject criticism of China also demonstrate that they are expressing their right to free speech and confronting and learning about ideas contrary to their beliefs.

When Chinese students don’t support the CCP, it is still pragmatic for them to show support for the PRC, or at least keep a low profile to avoid risk to themselves and their families. Upholding the safety of students in Australia should be a priority for universities, even if it upsets the CCP.

Studying overseas is frequently alienating, and Chinese students’ experiences in Australia are no different.

PRC students mostly live in a “parallel society” without Australian friends. Brief interactions, or group work at university, can increase negative feelings because both international and local students believe the other’s opinions are biased, while language barriers also cause frustration.

Ideally, engaging Chinese students with liberal values would involve them studying social sciences in small classes. But universities and students have not pursued this; almost 80% of Chinese international students in Australia study engineering, science, IT, commerce and architecture in large lecture-style classes.

Encouraging students to engage in politics is an effective way of exposing them to democratic political processes and values. Discouraging or denying Chinese students the right to participate in student and national politics because of suspicions about their political loyalty is the exact opposite of the approach universities should be taking.