This is part of a new series looking at the national security challenges facing Australia, how our leaders are responding to them through legislation and how these measures are impacting society. Read the rest of the series here.

It is evident from Australia’s increasingly severe droughts and record-breaking heatwaves that time is running out to take action on climate change.

Yet, despite persistent calls from eminent scientists to reduce global dependence on fossil fuels, a call to action has gone unanswered by our political leaders.

And we aren’t just facing an environmental threat alone in Australia – there are significant implications for our national security and defence capabilities that we haven’t fully reckoned with either.

This point was made abundantly clear in a speech prepared for Defence Force Chief Angus Campbell at an event in June, excerpts of which have been recently published by the media. It noted that Australia is in

the most natural disaster-prone region in the world … [and] climate change is predicted to make disasters more extreme and more common.

What kinds of security risks do we face?

climate-related drivers for armed violence and conflict will increase as climate change progresses.

The survey points out that the 2011 uprising against Syrian President Bashar al-Assad that escalated into civil war was preceded by the country’s deepest and most prolonged drought on record. One study has found the drought was two to three times more likely to happen due to climate change, and that it helped fuel migration to large cities, which in turn exacerbated the social issues that caused the unrest.

In May 2018, I was among numerous experts who provided evidence to a Senate committee examining the potential impacts of climate change on Australia’s national security.

One of the biggest threats I identified was the possibility of mass migration driven by climate change.

There will be nearly 6 billion people in the Asia-Pacific region by 2050. And if the region has become increasingly destabilised due to climate change, many people will likely be affected by rising sea levels, water and food shortages, armed conflicts and natural disasters, and desperate to find more secure homes.

This is already happening now. Since 2008, it’s estimated that an average of 22.5 million to 24 million people have been displaced globally each year due to catastrophic weather events and climate-related disasters.

Read more: US military strategists warn that climate is a 'catalyst for conflict'

They will migrate from less viable areas with lower water availability and crop productivity and from areas affected by rising sea level and storm surges. The poorest and most climate-vulnerable areas will be hardest hit.

Australia, with its very low population density, will likely be an attractive place for climate migrants to attempt to resettle. The World Bank has called on Australia to allow open migration from climate-affected Pacific islands, but successive governments haven’t exactly been open to refugees and asylum seekers in recent years.

Read more: Refuge City, a new kind of city for our times

If we don’t have a plan in place, our estimated 2050 population of 37.6 million could be overwhelmed by the scale of the national security problem.

Other experts agreed. American climate security expert Sherri Goodman described climate change as a “direct threat to the national security of Australia”, saying the region is

most likely to see increasing waves of migration from small island states or storm-affected, highly populated areas in Asia that can’t accommodate people when a very strong storm hits.

Australia would also struggle to respond to worsening natural disasters in our region either caused by or exacerbated by climate change.

As part of the Senate inquiry, the Department of Defence noted an “upwards trend” in both disaster-related events in the Asia-Pacific region and disaster-related defence operations in the past 20 years.

As alluded to in the speech prepared for Campbell in June, we could easily find ourselves overwhelmed by disaster relief missions due to the severity and scale of future weather events, or due to a series of events that occur concurrently in dispersed locations.

This would stretch our available first responder forces – defence, police, ambulance, firefighters and other emergency services – even in the absence of any other higher priority peacekeeping missions around the world. 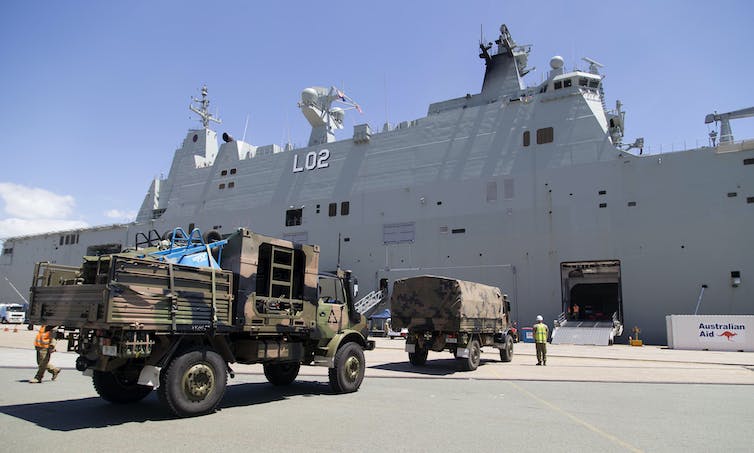 Recommendations for a way forward

The Senate report listed 11 recommendations for action by national security agencies and the government.

Among these were calls for:

Some of these findings were contested. In their comments, the Coalition senators made a point of saying how well the government has been doing on climate change in the defence and foreign affairs portfolios. Sufficient strategies are in place

to ensure Australia’s response to the implications of climate change on national security is well understood and consistent across the whole of government.

They also considered that a separate recommendation on defence emissions reduction targets fell outside the spirit of the inquiry. They did not support it.

A lack of urgency and response

The findings in the report are a cause for concern. The recommendations lack timetables for action and a sense of urgency.

The Senate committee also admitted its own shortcomings. For instance, it couldn’t adequately examine the potential impacts of climate change on Australia’s economy, infrastructure and community health and well-being due to a lack of substantial evidence on these issues.

Furthermore, and most worryingly, it seems the government just doesn’t care enough. It has yet to table a response to the report more than a year later.

A welcome development would be if the government announced a climate change security white paper that clearly spells out where ministers stand on the issue and the specific measures we need to take to prepare for the threats ahead. It would also dispel the concerns of many Australians about our future readiness.

But the Coalition’s response to the Senate report is breathtakingly complacent and smacks of reckless negligence since Australia is on the front line when it comes to climate change and our national security faces undeniably serious risks.

Climate change is already presenting significant challenges to governance, our institutions and the fabric of our societies. It’s time we recognise the potential threats to security in our region, as well.