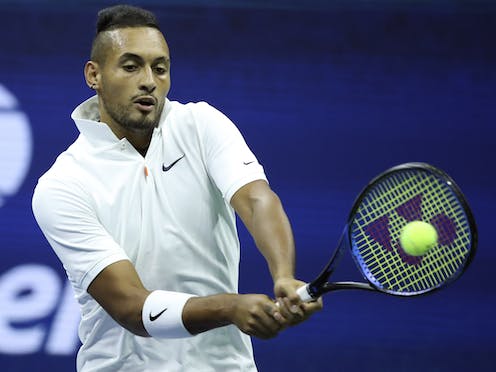 Last week the Association of Tennis Professionals (ATP) sentenced Australian tennis player Nick Kyrgios to a probationary period of six months that could lead to a suspension if certain conditions are not adhered to.

This probation follows a series of widely publicised controversial events and an “aggravated pattern of behaviours” on tour over the past few months.

Our research examines controversial athletes and how breaking the rules can have positive effects for sponsoring companies, even making an athlete more attractive. Sports celebrities often cultivate personal brands, not unlike traditional brands, to increase their marketability.

Despite his faults, Kyrgios is a draw card for a new generation of tennis fans. This makes him highly valuable for the sport and sponsors trying to expand their market.

With the strategic timing of the probation, immediately following the Laver Cup and just as Kyrgios announced he was pulling out of the current series of tournaments in Asia because of a collarbone injury, some have been led to believe important stakeholders don’t want Kyrgios out. In fact, many will likely be on the edge of their seats to see if he breaks the rules. Seems he is good for business.

Known as the bad boy of tennis, Kyrgios is no stranger to controversies on and off the tennis court. One of his first and most talked about episodes happened in 2015 in Montreal when he was fined for making an insulting remark to fellow player Stan Wawrinka about his then girlfriend, provoking a storm of criticism.

Since then, there have been more similar incidents including tanking matches, explosive exchanges with umpires, foul language, obscenity, chair throwing and comments about other players.

The past few months have been no exception. His Wimbledon tournament was punctuated with partying before an important clash with Rafael Nadal as well as a heated argument with the umpire and a volley shot aimed directly at Nadal. The North American hard court season was no better as Kyrgios was fined US$167,000 over a violent outburst at the Cincinnati Masters. These multiple incidents led to an investigation by the ATP, which resulted in the probationary period.

In one of the most formal sporting environments where even spectators have rules to follow, Kyrgios clearly clashes with the image of a traditional tennis player. Not only do his earrings, distinctive haircut and popped collar make his look stand out, his loud and opinionated personality is also a mismatch with the conventional world of tennis.

While his regular tantrums, antics and meltdowns make him the most controversial athlete in the current tennis era, Kyrgios is also perceived to be one of the most talented and entertaining players on the circuit. Indeed, his immense talent is undeniable. Often cited as one of the most physically gifted players, Kyrgios has an impressive range of shots with a rare combination of power, speed and finesse.

His ascension to one of the next generation of tennis players to watch was quick with a junior Australian Open title in 2013 and beating then-world champion Rafael Nadal at Wimbledon in 2014. He also has an impressive record against top-ten opponents in 2019 and is the only active player in tennis history to beat each of the “Big Three” – Roger Federer, Rafael Nadal and Novak Djokovic – in their first meetings.

While he is loved by many for his undeniable talent, being different and highly entertaining, he is also hated by others for his perceived disrespect to the game of tennis. Australia’s tennis “wild child” is the most polarising player in the tennis community.

Read more: Wimbledon: Nick Kyrgios may be the bad boy of tennis, but he's playing by the rules

Kyrgios is different from the rest and he consciously plays this card. He is colourful, authentic and fans can relate to him, and the way is he unapologetically himself is attractive especially for the younger generation.

Academic research has shown athletes are important social referents in terms of high standards of achievement to which consumers aspire. This is why they are frequently used in endorsements.

Celebrities’ influence has been widely linked to expertise and physical attractiveness, but more recent emphasis has been put on how accessible or relatable athletes are. Kyrgios is perceived as approachable when he agrees, for example, to hitting with a fan at practice in Montreal or asks fans in the stands where he should serve. On social media, he is one of the most followed male tennis players, fifth in line after Nadal, Federer, Djokovic and Murray.

In a sport that’s trying to appeal to a new fan base without alienating loyal traditional tennis fans, Kyrgios gets bums on seats. When fans come to watch Kyrgios play, one thing is certain: they will be entertained by his spectacular tweeners, tricky shots and fast serves, but his temper creates frequent opportunities for sensational tantrums.

All of these elements, the good, the bad, and the ugly make up his human brand, and companies are interested in endorsers with exciting personalities.

Recently, controversial athletes with a rebellious image have gained appeal to specific target markets. Smart brands are leveraging this opportunity. In the case of Kyrgios, his sense of fashion and passion for hip hop and basketball have led to partnership collaborations with Nike and NBA star Kyrie Irving, making him an asset for both the sport and sponsors.

When Kyrgios plays, we all watch, whether to see him succeed or fail. But it’s difficult to dispute his entertainment value. Kyrgios is arguably the greatest showman of modern day tennis.