Returning our old clothes to big fashion chains - rather than taking them to charity stores - could make fast fashion companies pay for their waste and fuel vital recycling research. Even better if we all do it at once.

Public protests, such as Extinction Rebellion’s colourful catwalk that blocked roads in central London in April, have raised awareness yet done little to motivate governments to address the environmental impact of the fast fashion industry.

“The government is out of step with the public who are shocked by the fact that we are sending 300,000 tonnes of clothes a year to incineration or landfill,” remarked British MP Mary Creagh in June this year, after that country’s parliament rejected a proposed garment tax on the fashion industry. “Urgent action must be taken to change the fast fashion business model which produces cheap clothes that cost the earth.”

Changes are not happening fast enough. Residual fashion waste averages 2.25 million tonnes per year in Australia, with an estimated clothing value of $500 million. By 2030, it is predicted that the fashion industry will use two Earths’ worth of resources, with the demand for clothing increasing by 63%. But consumers can act now to influence corporations.

If you’re not part of the solution…

Even those who don’t purchase “fast fashion” – a term used to describe clothes that reproduce the latest catwalk designs at high speed and low cost – bear the consequences as garment waste enters landfill, contaminates air, soil and water. 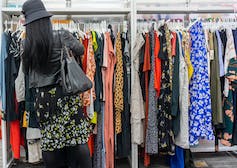 Fast fashion companies take looks from the catwalk to the shopping centre as quickly as possible. www.shutterstock.com

While government and industry self-regulation have so far failed to make significant progress in this area, consumers have a role to play in protecting the environment.

Global Fashion Agenda’s Pulse 2019 report quotes research showing more than 50% of consumers would switch brands if offered an environmentally and socially friendly alternative. But that sustainability is a key purchasing criterion for just 7% of consumers, trailing high quality, looking successful and receiving good value for money.

There are already opportunities for consumers to engage with fast fashion companies on this issue. H&M and Zara have collection boxes instore to collect old clothing and recycle it into new garments. H&M will also donate 3c for every kilogram of clothing returning in this way to fund research into recycling technologies.

Unfortunately, clothing recycling technology is in its infancy and the vast infrastructure to make recycling commercially viable does not exist. Many materials made from recycled material are blended with polyester or elastane to make materials that cannot be recycled again. 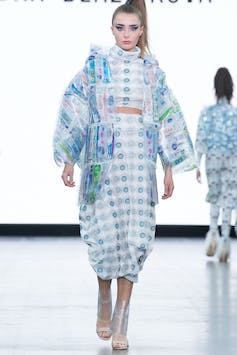 At the University of Technology Sydney we are developing new fabrics made from microalgae. This deep technology research requires significant investment, time, and expertise without a guaranteed outcome. Such research is not attractive to investors looking for an instant return. But this knowledge development is our only hope of building a truly circular fashion industry.

If Australians redirected fast fashion waste back to where it belongs, they could raise the equivalent of H&M’s Global Change Award, which funds sustainable fashion ideas to the tune of $1 million euro (A$1.6 million) within 64 days. Imagine the potential to raise money for research and infrastructure in this way given the 300,000 tonnes of waste dumped in the UK each year and the 16 million tonnes in the US.

Charity stores in Australia are flooded with fast fashion garments that they simply cannot use and then have to discard. According to the National Association of Charitable and Recycling Organisations, last year Australian charities paid $13 million a year to dispose of 60,000 tonnes of unusable donations.

Sending cheap cast-offs back to their producers would force big chains to pay for the afterlife of their garments, making mass overproduction less profitable.

Returning clothing is a way of sending a clear signal to shareholders in a way that affects the profits of the company. It nudges employees within fast fashion companies to justify to their superiors and shareholders the need to move towards more sustainable practices.

Consumers could stage mass protests by organising to return used clothing to companies in a single day of action, burying the stores in their own waste and showing the scale of the problem. 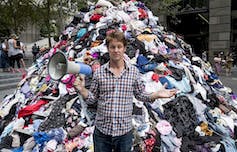 A scene from the ABC’s War on Waste. ABC

A single change in behaviour has grand potential. Locally, 68% of those who watched the ABC’s War on Waste second series reported that they’d changed their habits. The series triggered Woolworths supermarket’s decision to remove 3.2 billion single-use plastic bags a year from its checkouts, inspired cafes and customers to adopt reusable cups, and led to hospitality businesses eliminating single-use plastic straws.

It is time to make corporations pay for their waste, fund research and change their business models. If they continue to disregard their environmental responsibilities, citizens have the power to bury their stores in their own waste.

We can return our old clothes to fast fashion companies and change the industry, one garment at a time.