Scientists have long been concerned about the potential collapse of the West Antarctic Ice Sheet and its contribution to global sea level rise. Much of West Antarctica’s ice lies below sea level, and warming ocean temperatures may lead to runaway ice sheet retreat.

This process, called marine ice sheet instability, has already been observed along parts of the Amundsen Sea region, where warming of the ocean has led to melting underneath the floating ice shelves that fringe the continent. As these ice shelves thin, the ice grounded on land flows more rapidly into the ocean and raises the sea level.

Although the Amundsen Sea region has shown the most rapid changes to date, more ice actually drains from West Antarctica via the Ross Ice Shelf than any other area. How this ice sheet responds to climate change in the Ross Sea region is therefore a key factor in Antarctica’s contribution to global sea level rise in the future.

Periods of past ice sheet retreat can give us insights into how sensitive the Ross Sea region is to changes in ocean and air temperatures. Our research, published today, argues that ocean warming was a key driver of glacial retreat since the last ice age in the Ross Sea. This suggests that the Ross Ice Shelf is highly sensitive to changes in the ocean.

History of the Ross Sea

Since the last ice age, the ice sheet retreated more than 1,000km in the Ross Sea region – more than any other region on the continent. But there is little consensus among the scientific community about how much climate and the ocean have contributed to this retreat.

Much of what we know about the past ice sheet retreat in the Ross Sea comes from rock samples found in the Transantarctic Mountains. Dating techniques allow scientists to determine when these rocks were exposed to the surface as the ice around them retreated. These rock samples, which were collected far from where the initial ice retreat took place, have generally led to interpretations in which the ice sheet retreat happened much later than, and independently of, the rise in air and ocean temperatures following the last ice age.

But radiocarbon ages from sediments in the Ross Sea suggest an earlier retreat, more in line with when climate began to warm from the last ice age. 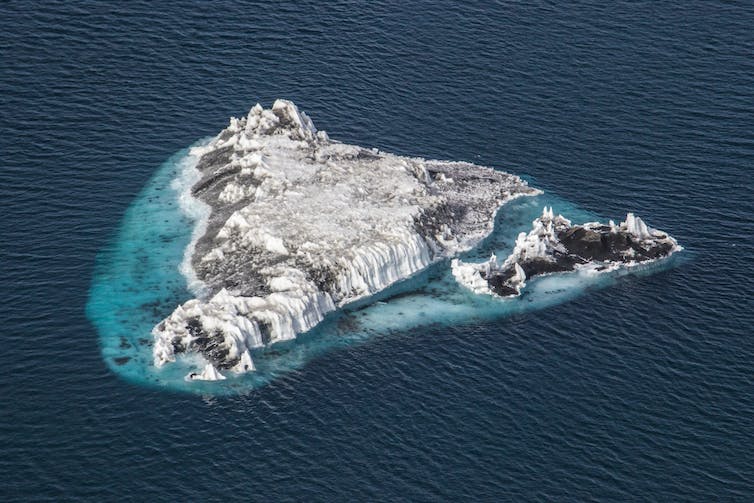 An iceberg floating in the Ross Sea - an area that is sensitive to warming in the ocean. Rich Jones, CC BY-ND

Using models to understand the past

To investigate how sensitive this region was to past changes, we developed a regional model of the Antarctic ice sheet. The model works by simulating the physics of the ice sheet and its response to changes in ocean and air temperatures. The simulations are then compared to geological records to check accuracy.

Our main findings are that warming of the ocean and atmosphere were the main causes of the major glacial retreat that took place in the Ross Sea region since the last ice age. But the dominance of these two controls in influencing the ice sheet evolved through time. Although air temperatures influenced the timing of the initial ice sheet retreat, ocean warming became the main driver due to melting of the Ross Ice Shelf from below, similar to what is currently observed in the Amundsen Sea.

The model also identifies key areas of uncertainty of past ice sheet behaviour. Obtaining sediment and rock samples and oceanographic data would help to improve modelling capabilities. The Siple Coast region of the Ross Ice Shelf is especially sensitive to changes in melt rates at the base of the ice shelf, and is therefore a critical region to sample.

Implications for the future

Understanding processes that were important in the past allows us to improve and validate our model, which in turn gives us confidence in our future projections. Through its history, the ice sheet in the Ross Sea has been sensitive to changes in ocean and air temperatures. Currently, ocean warming underneath the Ross Ice Shelf is the main concern, given its potential to cause melting from below.

Challenges remain in determining exactly how ocean temperatures will change underneath the Ross Ice Shelf in the coming decades. This will depend on changes to patterns of ocean circulation, with complex interactions and feedback between sea ice, surface winds and melt water from the ice sheet.

Given the sensitivity of ice shelves to ocean warming, we need an integrated modelling approach that can accurately reproduce both the ocean circulation and dynamics of the ice sheet. But the computational cost is high.

Ultimately, these integrated projections of the Southern Ocean and Antarctic ice sheet will help policymakers and communities to develop meaningful adaptation strategies for cities and coastal infrastructure exposed to the risk of rising seas.