This is the fourth in a series of articles discussing a recently released comprehensive evaluation of the Queensland government’s 2016 policy reforms to tackle alcohol-fuelled violence and the implications for liquor regulation and the night-time economy in Queensland and Australia. A summary report is also available.

The effect on live music of changes to trading conditions in nightlife precincts generates heated debate. That’s because live music matters. It is a unique and important part of the late-night rhythm and culture of the city.

In both Melbourne and Sydney, we’ve seen sustained debate about how urban development and regulation of licensed venues affect opportunities for live performance.

Contrary to some of the claims made in these debates, our evaluation of the Queensland government’s tightening of liquor licensing restrictions in 2016 suggests no change to the number of venues or impact on the overall trend of an increase in live music performances.

Read more: Lessons from Queensland on alcohol, violence and the night-time economy

But staging smaller shows by emerging artists has become more difficult because of the costs of new security requirements. The viability of the venues depends on selling alcohol. As a result, many venues depend on alcohol sales in late-night trade when they convert to being a bar or club with DJs.

What happened in Fortitude Valley?

In July 2016, the Queensland government changed laws affecting designated safe night precincts like Fortitude Valley in Brisbane. This included serving last drinks at 3am and mandatory ID scanning in venues trading after midnight.

We monitored what impact these changes to trading conditions might have on live music in Fortitude Valley.

The Valley is unique in Australia for its concentration of live music venues in one small neighbourhood and the early development of policy to protect and foster live music in the area.

The Valley has two overlapping precincts. The special entertainment precinct was created in 2006 to provide regulatory certainty for live music venues. The safe night precinct is the area subject to the 2016 Tackling Alcohol-Fuelled Violence legislation. 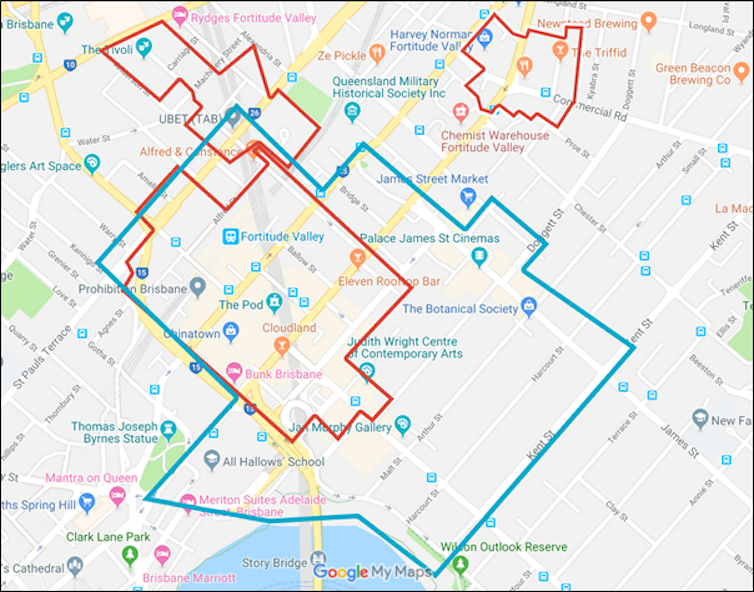 Live music venues in the Valley compete with large clubs and pubs for space. They are subject to the regulatory and compliance frameworks introduced to contain harms in the precinct. As a result, they are having to rethink how they maintain their distinctive music scenes in rapidly changing neighbourhoods.

Despite its cultural and economic importance of original live music venues, their numbers and performances are not systematically and independently monitored in Australia. Music industry bodies could work with performers and venues to publish independent and reliable information about the number and type of venues and gigs over time.

Music rights licensing organisation APRA/AMCOS asks live music performers to submit performance returns that document all their live performances. Our analysis of this data shows live music performances in The Valley have been trending upward since 2001. Our evaluation suggests the Tackling Alcohol-Fuelled Violence policy measures had no impact on this trend. 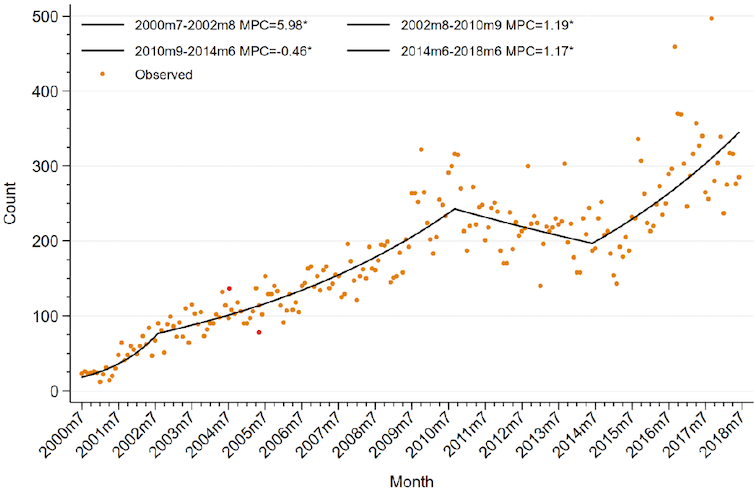 The number of live music performances per month in Fortitude Valley between the 2001 and 2018 financial years. MPC refers to Monthly Percentage Change. Author provided

This APRA/AMCOS performance data, however, cover everything from cover bands, DJs and ambient music in restaurants and bars to original live music performances in small venues through to stadium rock shows.

While the trading pattern of venues on Saturday nights has not changed, in interviews we conducted venue owners and managers reported various ways they subsidised or supplemented the income from live music.

Nearly all original live music venues only generate income from bar sales. Proceeds from tickets and the door go to production costs and the musicians. The viability of the venues depends on selling alcohol before, during and after performances.

Read more: Queenslanders are among our heaviest drinkers on nights out, and changing that culture is a challenge

Some venues used profit generated on large weekend shows to subsidise smaller local weeknight shows. These shows matter because they provide opportunities for emerging artists to hone their craft and are part of the distinctive cultural fabric of the city.

However, venue owners indicated that staging these smaller shows has become more difficult because of the prohibitive cost of employing security to operate the mandatory ID scanners. This illustrates how, according to venue owners, efforts to contain harm in the nightlife economy can have unintended damaging effects on cultural scenes.

The majority of venues that support original live music in the precinct are less than ten years old. Many seem well adapted to the commercialised late-night precinct because they combine live music with late-night trade. They put on a show early in the evening and then by midnight convert to a late-night bar or club with DJs.

Some of these venues claimed they would not be commercially viable if they only put on original live music before midnight and then closed. Others indicated live music enabled them to generate revenue earlier in the evening - before a clubbing crowd comes in.

This kind of adaptation is what you’d expect to see in a market as it reacts to changes in both consumer culture and policy. But it raises thorny questions for cultural and public health policy.

The Valley has a unique concentration of live music venues, and cultural policy has played a role in fostering and sustaining this vibrant cultural scene. In one sense that’s a success story the city should celebrate and look to capitalise on alongside the effort to reduce harms in nightlife precincts. But, in another sense, a critical issue is that the effort to both maintain cultural vibrancy and reduce harms is potentially thwarted by venues shifting to a homogenous late-night clubbing model.