Fossilised flies that lived 54 million years ago have revealed a surprising twist to the tale of how insects’ eyes evolved. These craneflies, unveiled in Nature today, show that insect eyes trap light the same way as human eyes, using the pigment melanin – yet another example of evolution finding similar solutions to similar problems.

Read more: Eye to the past: vision may be older than previously thought

Evolutionary biologists have always been fascinated by eyes. Charles Darwin, anticipating the sceptics, devoted a long explanation of how random mutation followed by natural selection could readily fashion such “organs of extreme perfection”. It is not surprising that these useful adaptations have evolved repeatedly across the animal kingdom - octopuses and squids, for instance, have independently acquired eyes uncannily similar to ours.

Vision is so vital that most animals today have photoreceptors of some kind. Notable exceptions include creatures that live in total darkness, such as in caves or the deep ocean.

Yet the fossil record of eyes is very poor. The rock record generally preserves hard parts such as bones and shells. Eyes and other soft tissues, such as nerves, veins and intestines, are preserved only under exceptional circumstances. 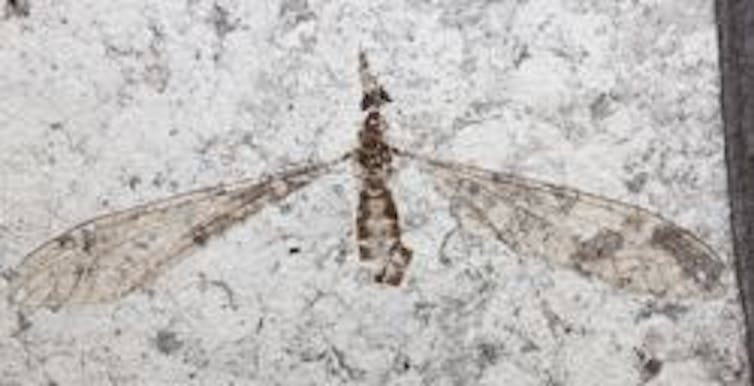 One of the fossils that yielded the surprise discovery: a 54-million-year old cranefly from Denmark. Lindgren et al./Nature

Because eyes are icons of evolution yet rarely fossilised, the discovery of perfectly preserved eyes from 54 million-year-old insects is noteworthy. In their new study, researchers led by Johan Lindgren of Lund University in Sweden collected and analysed eyes from 23 craneflies – long-legged relatives of pesky houseflies.

The fossils were exquisitely preserved in sediments containing high levels of fine-grained volcanic ash. They were unearthed in what is now chilly Denmark, but back then was a tropical paradise with abundant insect life.

The fossilised eyes were surprisingly similar to our own eyes in one important way. The back of our eyeball, called the choroid, is dark and opaque; this protects against ultraviolet radiation and also stops stray light bouncing around and interfering with vision. In human eyes, this anti-reflective layer contains high levels of the pigment melanin, the same molecule involved in skin pigmentation (hence terms such as “melanoma”).

Insects, too, have dark anti-reflective layers in their eyes, but this was long thought to consist entirely of a different molecule, ommochrome. Given that insect eyes arose independently from our own and have an entirely different structure, it seems reasonable that their molecular machinery would also be different.

However, detailed chemical analysis of the fossil cranefly eyes revealed that they contained human-like melanin. When the researchers had another look at the eyes of living craneflies, they were surprised to confirm the presence of melanin (as well as lots of ommochrome). It took fossils to alert us that the eyes of humans and insects both use the same shielding pigments (melanin) - yet another example of convergent evolution.

Intriguingly, the outer layers of the fossilised eyes were full of calcite, the mineral that makes up most of limestone. Not only that, but crystals in the calcite were aligned to transmit light efficiently into the eye. Yet this apparent fine engineering (a mineralised outer eye layer optimised to transmit light) was almost certainly caused by the fossilisation process, as the eyes of living craneflies are not mineralised.

While the fossil record can reveal, it can also mislead, if not interpreted carefully. Trilobites, the hard-shelled crab-like creatures that are among the most abundant and diverse animal fossils, are frequently found with mineralised, light-transmitting outer eye layers. These have usually been assumed to faithfully reflect their life condition: predation in ancient oceans was so intense that trilobites even armoured their eyeballs. 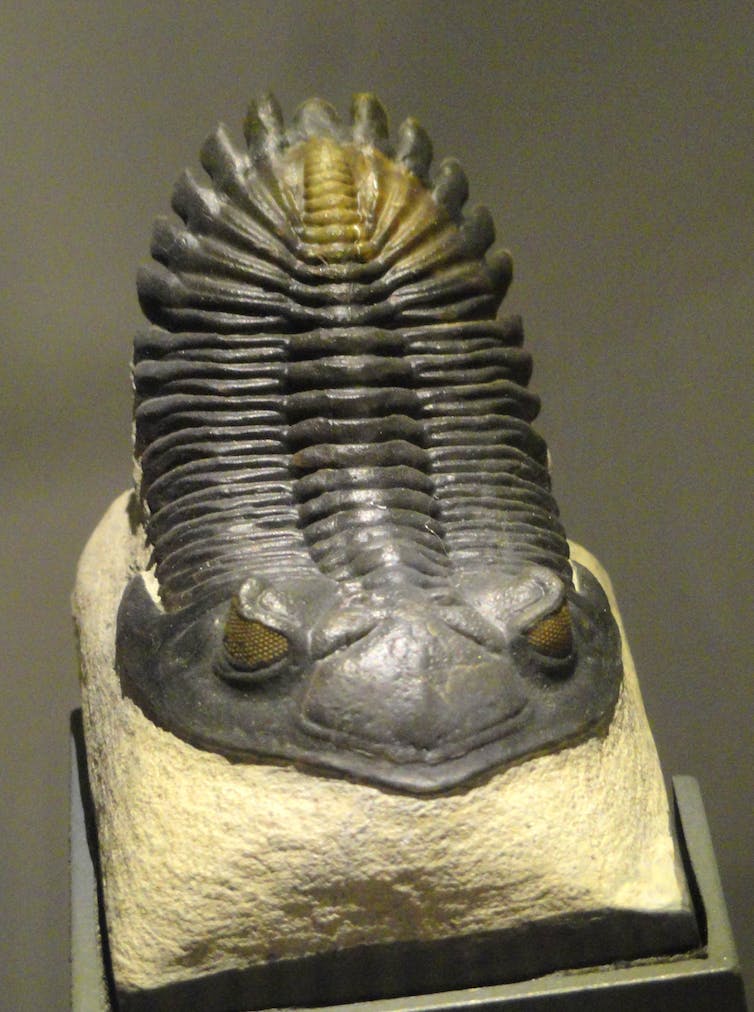 Lindgren and colleagues warn against this interpretation: perhaps the trilobite’s “protective goggles” only appeared after fossilisation, just as in the craneflies. However, this interpretation will likely be debated. Trilobite eyes seem to have been unusually rigid and resilient in real life, as they are preserved in three dimensions much more often than eyes of other animals. They also have certain optical properties that make more sense when the rigid outer layer is accepted as real.

Read more: The eyes have it: how vision may have driven fishes onto land

A disagreement between a few palaeontologists might seem a bit arcane, but these debates can have real-world relevance. Most famously, the concept of nuclear winter was directly inspired by discussion of how the dinosaurs went extinct, when a meteorite impact enveloped the world in a cloud of dust, deep-freezing the entire biosphere.

Granted, the debate over how insect and trilobite eyes functioned is unlikely to influence world peace, but it might still have useful applications. For example, the way trilobite lenses (apparently) provide constant acuity while being totally rigid has inspired bioengineers to fashion high-performance optical devices with uses spanning microscopy to laser physics.