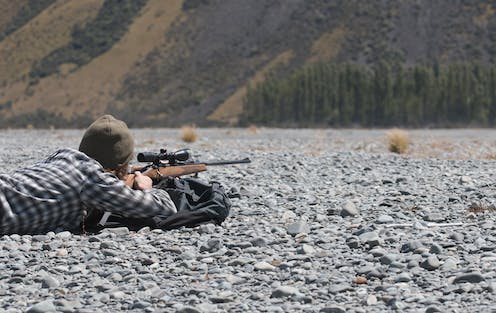 In a recent survey, New Zealand gun owners reported more trust in other gun owners than people who don't own guns, but lower levels of trust in the pro-gun lobby.from www.shutterstock.com, CC BY-ND

The terrorist attacks on the Christchurch Muslim community on 15 March this year resulted in a political response that was decidedly different from what...

The terrorist attacks on the Christchurch Muslim community on 15 March this year resulted in a political response that was decidedly different from what usually follows mass shootings in the United States.

The speed of legislative action, banning military-style semi-automatic weapons (MSSAs) within days of the attack, was remarked on both at home and around the world. Some gun owners began handing over their MSSAs to police voluntarily after the attacks, and hundreds of guns have been handed in during government buyback events throughout the country.

But there was another group who considered the government response an over-reaction and an infringement of gun owners’ rights.

Given these diverging views, which story truly reflects gun owners? Do gun owners trust the government to do what’s right? And do they trust other gun owners or the pro-gun lobby that purports to represent them?

These are questions we can now answer from our recent survey.

Our team runs an annual survey asking a nationally representative sample of New Zealanders about their trust in people and institutions. The 2019 survey was carried out just prior to the attacks, but we decided to run it again in April, primarily to see whether this tragedy had an impact on trust. We also asked respondents whether they were a gun owner or living in a household with someone who owned a gun - and we asked about trust in gun owners and the pro-gun lobby.

People in gun-owning households were somewhat more likely to be New Zealand European (84% vs 74% in the general population) and were more likely to be between 45 and 60 years old, compared to those who did not own guns (34% vs 25%).

Household gun owners reported moderately lower levels of education, with 32% having a university degree compared with 37% of non-gun owners. They were more likely to report middle-class household incomes between NZ$50,000 and NZ$150,000 (60% vs 52%) and less likely to live in big cities (21% vs 47%).

Perhaps surprisingly, gun owners are only a little different from others in thinking the government is generally doing the right thing. Controlling for the things that differentiate gun owners from those who don’t own guns, we found a statistically significant, but not very meaningful difference. Survey respondents were asked:

How much trust do you have in the government to do what is right for New Zealand?

If gun owners seem like the group who stood to lose through this legislation, why aren’t there bigger differences between those who do and do not own guns in their trust in government? One explanation could be that gun owners are actually more similar than different from the rest of New Zealand when it comes to their views on guns.

In addition to asking about trust in groups such as police, medical practitioners and corporations, we asked people how much trust they had in gun owners and the pro-gun lobby to do the right thing. This scale ranged from 1 (no trust at all) to 5 (complete trust). Unsurprisingly, gun owners reported a higher average trust level in other gun owners: 3.4 compared with 2.7 among those who did not guns – a moderate to large effect size.

When looking at trust in the pro-gun lobby, gun owners still reported higher levels of trust than non-gun owners – 2.7 vs 2.2. But the overall levels of trust were much lower than in gun owners generally. Gun owners tended to rate the gun lobby similar in trust as corporations and politicians. Those who don’t own guns rated the gun lobby as only more trustworthy than bloggers or online commentators.

When this survey was conducted, the main legislative change announced was a ban and government buy-back of MSSAs. For the average gun owner, this might have been seen as sensible. But as more changes were announced and the gun lobby began to mobilise, it is important to understand whether their views are widely shared by gun owners.

As New Zealand goes through the process of reforming gun laws to make our country safer and reinforce gun ownership as a privilege rather than a right, one thing is important: the views of the average gun owner are not co-opted by a fringe view of gun ownership.

Authors: Kate C. Prickett, Director of the Roy McKenzie Centre for the Study of Families and Children, Victoria University of Wellington