Even though we can see the Moon shining brightly in the night sky – and sometimes in daylight – it’s hard to put into perspective just how large, and just how distant, our nearest neighbour actually is.

So just how big is the Moon?

The Moon passing in front of Earth, captured by the Earth Polychromatic Imaging Camera (EPIC), more than a million kilometres away from our planet.

That answer isn’t quite as straightforward as you might think. Like Earth, the Moon isn’t a perfect sphere. Instead, it’s slightly squashed (what we call an oblate sphereoid). This means the Moon’s diameter from pole to pole is less than the diameter measured at the equator.

Read more: Why the Moon is such a cratered place

But the difference is small, just four kilometres. The equatorial diameter of the Moon is about 3,476km, while the polar diameter is 3,472km.

To see how big that is we need to compare it to something of a similar size, such as Australia.

From coast to coast

The distance from Perth to Brisbane, as the crow flies, is 3,606km. If you put Australia and the Moon side by side, they look to be roughly the same size. 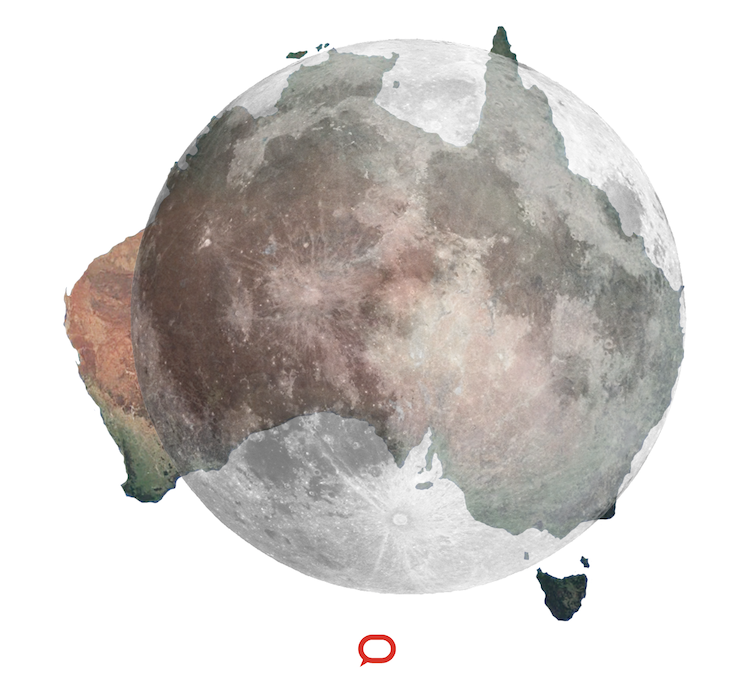 The Moon vs Australia. NASA/Google Earth

But that’s just one way of looking at things. Although the Moon is about as wide as Australia, it is actually much bigger when you think in terms of surface area. It turns out the surface of the Moon is much larger than that of Australia. 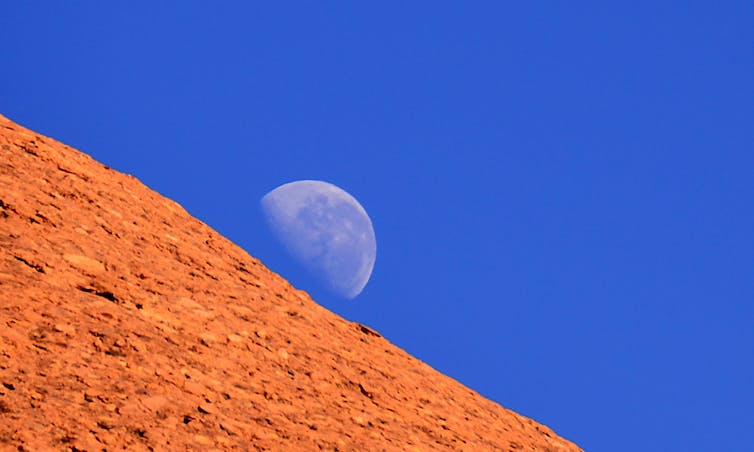 How far is the Moon?

Asking how far away is the Moon is another of those questions whose answer is more complicated than you might expect.

The Moon moves in an elliptical orbit around the Earth, which means its distance from our planet is constantly changing. That distance can vary by up to 50,000km during a single orbit, which is why the size of the Moon in our sky varies slightly from week to week. 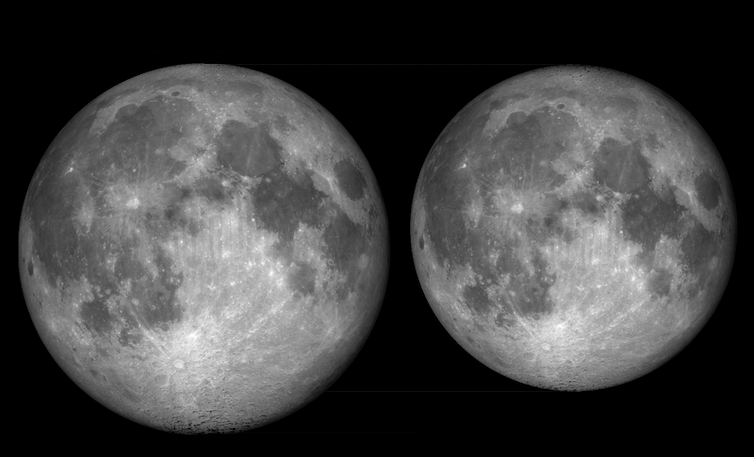 The Moon’s orbit is also influenced by every other object in the Solar System. Even when all of that is taken into account, the distance answer is still always changing, because the Moon is gradually receding from the Earth as a result of the tidal interaction between the two.

That last point is something we’ve been able to better study as a result of the Apollo missions. The astronauts who visited the Moon placed an array of mirror reflectors on its surface. Those reflectors are the continual target of lasers from the Earth.

By timing how long it takes for that laser light to travel to the Moon and back, scientists are able to measure the distance to the Moon with incredible precision, and to track the Moon’s recession from Earth. The result? The Moon is receding at a speed of 38mm per year – or just under 4 metres per century.

Drive me to the Moon

Having said all that, the average distance between the Moon and Earth is 384,402km. So let’s put that into context.

If I were to drive from Brisbane to Perth, following the fastest route suggested by Google, I would cover 4,310km on my road trip. That journey, driving across the breadth of our country, would take around 46 hours. 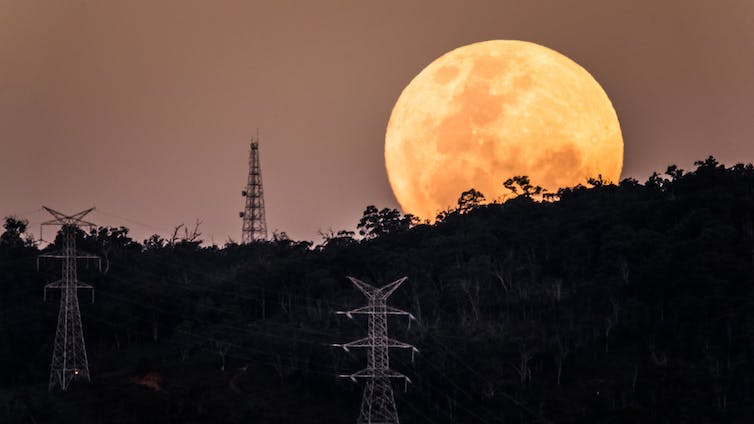 The full Moon rising over the Perth Hills, in Western Australia, in 2016. Paean Ng/Flickr, CC BY-NC-ND

If I wanted to clock up enough kilometres to say that I’d covered the distance between the Earth and the Moon, I’d have to make that trip more than 89 times. It would take five-and-a-half months of driving, non-stop, assuming I didn’t run into any traffic jams on the way.

Read more: Explainer: what is a solar eclipse?

The total solar eclipse seen from north Queensland in November 2012.

Sadly, such spectacular eclipses will eventually come to an end on Earth. Thanks to the Moon’s recession, it will one day be too distant to perfectly obscure the Sun. But that day will be a long time coming, with most estimates suggesting it will occur in something like 600 million years’ time.

While we’ve dispatched out robot envoys to the icy depths of the Solar System, the Moon remains the only other world on which humanity has walked. 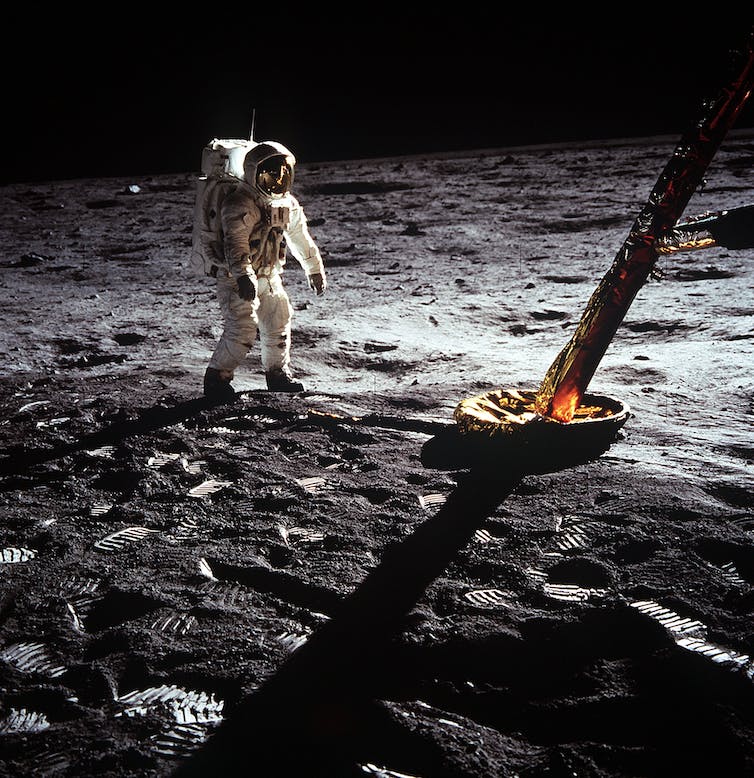 Astronaut Buzz Aldrin was the second man to walk on the Moon and one of the few moonwalkers still alive today. NASA

Fifty years after that first adventure, the number of people to have walked on the Moon who are still alive is in sharp decline. Twelve people have had that experience but, as of today, just four remain.

Vast as the Moon is, those 12 moonwalkers barely scratched the surface. Hopefully, in the coming years, we will return, to inspire a whole new generation and to continue humanity’s in-person exploration of our nearest celestial neighbour.