Earth’s magnetic field protects and makes our planet habitable by stopping harmful high-energy particles from space, including from the Sun. The source of this magnetic field is the core at the centre of our planet.

But the core is very difficult to study, partly because it starts at a depth of about 2,900 kilometres, making it too deep to sample and directly investigate.

Yet we are part of a research team that found a way to get information about Earth’s core, with details published recently in Geochemical Perspective Letters.

Read more: We made a moving tectonic map of the Game of Thrones landscape

It’s hot down there

The core is the hottest part of our planet with the outer core reaching temperatures of more than 5,000℃. This has to affect the overlying mantle and it is estimated that 50% of volcanic heat comes from the core. 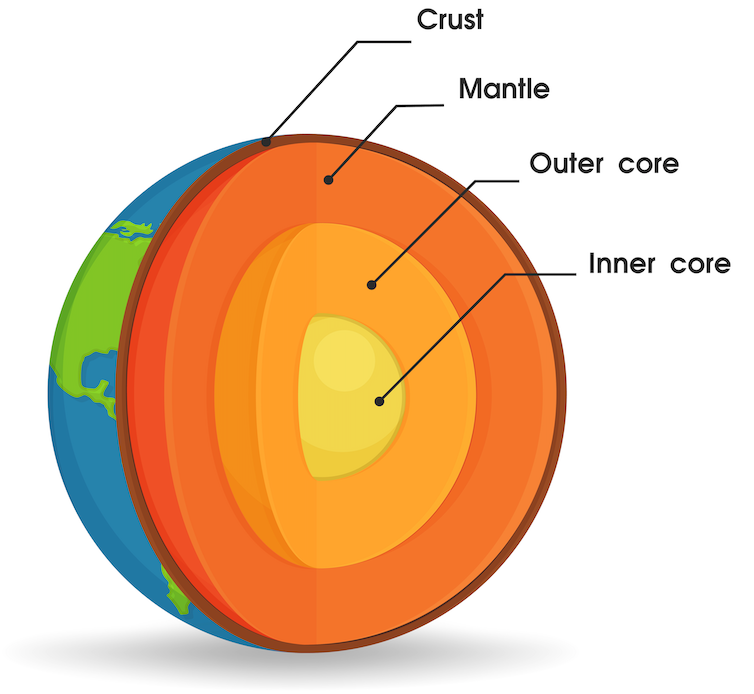 The layers of the Earth from the outer crust to the inner core. Shutterstock/VRVector

Volcanic activity is the planet’s main cooling mechanism. Certain volcanism, such as that which is still forming volcanic islands of Hawaii and Iceland, might be linked to the core by mantle plumes that transfer heat from the core to Earth’s surface.

Yet whether there is any exchange of physical material between the core and the mantle has been a subject of debate for decades.

Our findings suggest some core material does transfer into the base of these mantle plumes, and the core has been leaking this material for the past 2.5 billion years.

We discovered this by looking at very small variations in the ratio of isotopes of the element tungsten (isotopes are basically versions of the same element that just contain different numbers of neutrons).

To study Earth’s core, we need to search for chemical tracers of core material in volcanic rocks derived from the deep mantle.

We know the core has a very distinct chemistry, dominated by iron and nickel together with elements such as tungsten, platinum and gold that dissolve in iron-nickel alloy. Therefore, the metal alloy-loving elements are a good choice to investigate for traces of the core.

The search for tungsten isotopes

Tungsten (chemical symbol W) as the base element has 74 protons. Tungsten has several isotopes, including 182W (with 108 neutrons) and 184W (with 110 neutrons).

These isotopes of tungsten have potential to be the most conclusive tracers of core material, because the mantle is expected to have much higher 182W/184W ratios than the core.

This is because of another element, Hafnium (Hf), which does not dissolve in iron-nickel alloy and is enriched in the mantle, and had a now-extinct isotope (182Hf) that decayed to 182W. This gives the mantle extra 182W relative to the tungsten in the core.

But the analysis required to detect variations in tungsten isotopes is incredibly challenging, as we are looking at variations in the 182W/184W ratio in parts per million and the concentration of tungsten in rocks is as low as tens of parts per billion. Fewer than five laboratories in the world can do this type of analysis.

Evidence of a leak

Our study shows a substantial change in the 182W/184W ratio of the mantle over Earth’s lifetime. Earth’s oldest rocks have significantly higher 182W/184W than than most rocks of the modern-day Earth.

The change in the 182W/184W ratio of the mantle indicates that tungsten from the core has been leaking into the mantle for a long time.

Interestingly, in Earth’s oldest volcanic rocks, over a time frame of 1.8 billion years there is no significant change in the mantle’s tungsten isotopes. This indicates that from 4.3 billion to 2.7 billion years ago, little or no material from the core was transferred into the upper mantle.

If mantle plumes are ascending from the core-mantle boundary to the surface, it follows that material from Earth’s surface must also descend into the deep mantle.

Subduction, the term used for rocks from Earth’s surface descending into the mantle, takes oxygen-rich material from the surface into the deep mantle as an integral component of plate tectonics.

Experiments show that increase in oxygen concentration at the core-mantle boundary could cause tungsten to separate out of the core and into the mantle.

Read more: The 'pulse' of a volcano can be used to help predict its next eruption

Alternatively, inner core solidification would also increase the oxygen concentration of the outer core. In this case, our new results could tell us something about the evolution of the core, including the origin of Earth’s magnetic field. 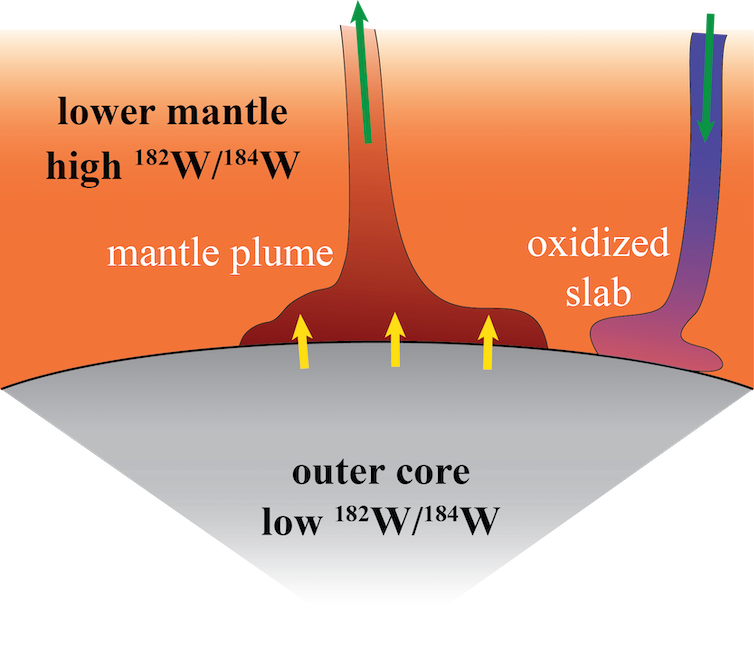 Cartoon showing the differences in tungsten isotope ratios between the Earth’s core and mantle, and how the Earth’s core might be leaking material into the mantle plumes. Credit: Neil Bennett

Earth’s core started as entirely liquid metal and has been cooling and partially solidifying over time. The magnetic field is generated by the spin of the inner solid core. The time of inner core crystallisation is one of the most difficult questions to answer in Earth and planetary sciences.

Our study gives us a tracer that can be used to investigate core-mantle interaction and the change in the internal dynamics of our planet, and which can boost our understanding of how and when the magnetic field was turned on.