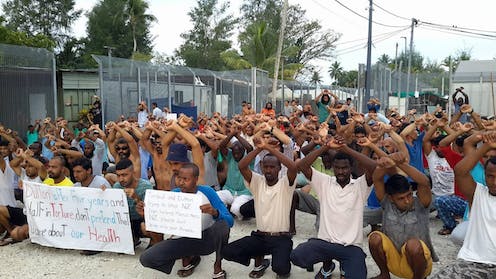 With all the hyperbole about the medevac law, it is easy to lose sight of its purpose.

Refugees have been transferred off Nauru and Manus Island for emergency medical treatment since offshore detention restarted on these islands in 2013. The Department of Home Affairs reported to Senate estimates that 898 refugees and asylum seekers had been sent to Australia for medical treatment prior to the passage of the medevac law earlier this year. Of those, 282 were returned to Manus and Nauru after receiving treatment, and the rest remained in Australia in detention.

These transfers occurred in response to pleas from doctors and health professionals on an ad hoc basis. And it was up to the Home Affairs Department and Minister Peter Dutton whether to comply with such a request. Medical emergencies could include life-threatening brain or heart conditions, complex abortions, or emergency psychiatric care for children at risk for suicide – all of which are beyond the capacity of the health systems on Nauru and Manus to treat.

Although some refugees were granted emergency medical evacuation, many others were not. In response, legal cases were brought against the government for breaching its responsibility to care for the refugees.

This required the federal court to convene at short notice to hear cases. It also required the expenditure of huge amounts of taxpayer money to call expert medical witnesses and file thousands of pages of supporting documentation.

Because of the delays in treatment, these legal battles were enormously risky for those in need of medical care.

How the process works under the medevac law

The medevac law was passed due to concerns the department was rejecting transfer applications for political rather than medical reasons. The point was to provide an expedient, objective process to determine whether transfers were required.

And despite the Coalition government’s opposition to the bill, the process for determining which refugees are moved off Nauru and Manus for treatment remains highly deferential to the minister and Department of Home Affairs.

There are two stages to this process.

First, two doctors must assess the person and make a recommendation for transfer. The federal court recently ruled it was possible to make this medical assessment based on documentation alone, as opposed to an in-person or teleconference assessment. This was a necessary adjustment to the law, given that the Nauru government has banned teleconferences for residents.

The minister is required to approve or refuse the recommendation for transfer within 72 hours. There are three grounds for refusal:

If the minister rejects the transfer on medical grounds, the second stage of the process kicks in, with an independent health advice panel (IHAP) assessing the doctors’ recommendation. It is important to note that this panel is comprised of government medical officers and other health professionals appointed by the minister.

To date, there have been 31 medical transfers under the law. In addition, nine recommendations were refused by the government. The panel of health experts upheld seven of the minister’s refusals, and overturned two.

Dutton has made a number of claims about the impact of the medevac law that he argues justify its repeal. All defy reason and logic.

First, the minister has claimed “activist doctors” were using the law to bring people to Australia when they do not require emergency medical care.

This is frankly highly offensive to the medical profession in Australia, and contradicts the clear intention of the law to take politics out of transfer decisions. Even if doctors making the initial recommendation are too left-leaning for Dutton, the expert panel is stacked with medical practitioners of his choosing.

Read more: There are 70 million refugees in the world. Here are 5 solutions to the problem

Second, the minister has argued that the capacity to be transferred to Australia for emergency medical treatment will lead to a resumption of the people-smuggling trade.

This is patently absurd. It is true that people smugglers can make up all sorts of stories about Australia relaxing its policies and it being easier to get to Australia. But the facts are crystal clear: the Coalition government maintains a policy of boat turn-backs and indefinite offshore detention for anyone thinking of making the journey.

Medical transfers to Australia are for a temporary period. Once people have been treated, they are returned to detention on Nauru or Manus. It is true that many asylum seekers have remained in Australia for extended periods for ongoing treatment, but these refugees remain within the immigration detention system. They are escorted to medical appointments and remain under guard while receiving treatment. They are given no hope of putting down roots in Australia.

The deterrent to people smugglers remains overwhelming. And, unsurprisingly, we have not seen a restarting of boat arrivals following the passage of the medevac law. Dutton’s own department has signalled this is unlikely in a briefing:

[Potential illegal immigrants] will probably remain sceptical of smuggler marketing and await proof that such a pathway is viable, or that an actual change of policy has occurred, before committing to ventures.

The only possible messaging that people smugglers might use to persuade people to get on a boat is the Coalition government’s own dire warnings of reopening the floodgates and political stunts like the brief resurrection of the Christmas Island detention centre at the staggering cost to taxpayers of over A$180 million.

Dutton’s third claim is that some refugees are refusing resettlement offers in the US because of the medevac law.

Again, it defies logic for refugees to refuse the US option – it is the only hope of resettlement currently on offer. One wonders whether the minister is using this claim as a cover for the fact that transfers to the US have come to a grinding halt under President Donald Trump.

The medevac law and human compassion

For over six years, successive Australian governments have maintained an unwavering narrow focus on stopping refugee boats with no concern for the victims of this policy – the innocent people on Manus and Nauru.

It is the narrowest of concessions to offer emergency medical treatment in Australia to people we have so mistreated.