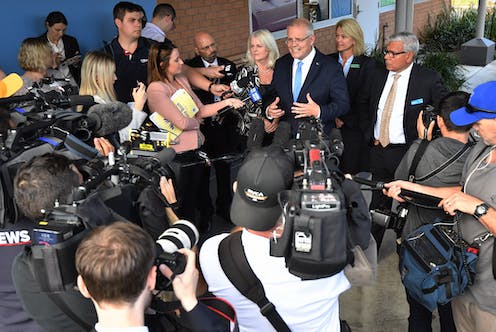 In his first address to the caucus after Labor’s shock election loss, Bill Shorten pointed to conservative interests

spending unprecedented hundreds of millions of dollars advertising, telling lies, spreading fear … Powerful vested interests campaigned against us through sections of the media itself, and they got what they wanted.

He was, of course, talking about News Corp press and “Sky after dark”, which campaigned heavily against the ALP during the election and have shown no sign of letting up since.

Experts agree that this campaigning style’s impact is cumulative and broadly agenda-setting, shaping the party-political landscape. Importantly, it also influences political and business elites in shaping the parameters and tone of debates.

In his new book, former prime minister Kevin Rudd argues a royal commission is required to rein in the power abuse and unethical journalism practices at the Murdoch news brands.

What can be done about media bias?

This is more than simply an ethical matter for media. It goes beyond more vigilant application of self-regulatory codes of conduct administered by the Australian Communications and Media Authority (ACMA) and the Australian Press Council (APC), or tightening political advertising rules. It requires tough legal and regulatory measures to prevent further structural damage at a time when media businesses are under threat from US platforms. Rules to stop further media concentration should be a priority for democratic governments.

The ACCC’s final report into Google and Facebook, due at the end of the month, may make some recommendations to assist this situation. Its preliminary report signals the need for stronger regulatory steps, recommending that:

… the regulatory authority could also monitor, investigate and report on the ranking of news and journalistic content by digital platforms and the provision of referral services to news media businesses.

It also recommends a wholesale review of the regulatory frameworks that offer patchwork oversight in relation to news consumption in Australia.

Increasing our understanding of the interaction between new and old media pluralism will require an assessment of the changing online news landscape. It will also need us to look more widely to understand the public mood. For example, the comments below articles and on social media are a neglected avenue for research.

Given the popularity of comment reading – about half of users read them and for longer than the article on average – comments’ potential contribution to pluralism matters.

While adding a new voice, comments onsite and on social media can also invite risk; comments on Chinese social media site WeChat played a key role in spreading misinformation that may have had a significant impact on the federal election. But there is little debate on how these spaces should be regulated.

The serious structural problem with media diversity in Australia will require more active regulation to avoid further damage to our democratic institutions. The removal of the two-out-of-three rule in 2017 led to the take-over of a major independent media company, Fairfax Media, by Nine Entertainment – a company known more for its tabloid style than independent journalism.

The 2018 merger was widely anticipated when the federal government repealed these anti-concentration laws. News Corp and Nine Entertainment now control the bulk of Australia’s newspaper sector.

Astonishingly, going into the federal election, only the Greens had elaborated media policies.

The UK government, through Ofcom, the main media regulator, has recognised that online news access is increasingly important as a news source, and plurality concerns continue in the online world. There is an ongoing debate about how current rules can be extended to online media, including the administration of the mergers public interest test and the national cross-media ownership rule.

In 2015, Ofcom updated its processes for assessing media pluralism. It has been required to review the UK’s ownership rules at least every three years since 2003. The restrictions in place include:

The secretary of state oversees the UK’s media-specific pluralism test and has the power to stop media mergers found to be against the public interest.

Ofcom is required to undertake a review of ownership patterns every three years. In its most recent statutory review in 2018, Ofcom concluded the rules needed to be retained to protect pluralism.

In response to the review, the key UK reform group MRC noted that media plurality concerns would require ongoing reassessment if the importance of TV news and newspapers continued to decline.

In this new framework, Ofcom has in place a range of indicators that are designed to assess the availability of news sources, their consumption and their impact on users. Australia is yet to even consider this approach, let alone investigate how a local version might be developed.

Keeping up with changing news consumption

As a source of news, Australian online (including social) news consumption now sits at 82%, according to recent research. Taking this changing consumption into account in policy is even more important when we know these platforms are not neutral: their algorithms manipulate what news content people are exposed to.

Under the UK approach, various aggregated metrics are necessary to allow regulatory agencies to track changes in patterns of news consumption and the diversity of available news sources.

Although it was an important first step to track the morphing consumption of news sources across platforms, Ofcom’s metric is still arguably incapable of assessing the operation of “real world” power and influence. That’s why regular reviews of shifting media power are so important for making policy.

Responsible policy-making obliges governments to monitor these developments, gathering the information needed to evaluate whether or not the current policy intent remains. Strong regulatory tools (including web traffic analysis software and news data analytics) are needed to do that.

Australia needs to develop a “thermometer” to measure media pluralism via an initial benchmark study followed by periodic reviews. We also need a robust, independent, public interest test that can be applied in merger environments.