It is traditional at major sports events to begin with a rendition of the national anthem. At the State of Origin rugby league clash between New South Wales and Queensland on Wednesday, however, at least four Indigenous rugby league players have vowed to remain silent – a protest against an anthem they feel doesn’t represent them.

It’s the second such protest in recent months. Before a rugby league match between the Indigenous All Stars and the Māori All Stars in February, a number of Australian players chose to remain silent when the anthem was played. One of them, team captain Cody Walker, called for a wider discussion into the anthem’s appropriateness – a feeling echoed by many Aboriginal people.

A growing number of athletes are using their celebrity status to speak out on social issues. For example, English footballer Raheem Sterling has been praised for tackling racism in the sport, while Australian rugby player David Pocock was a vocal supporter of same-sex marriage.

But such protests can sometimes spark a backlash among fans, particularly when it comes to sensitive issues like the national anthem.

The most famous example of this is the response to American football player Colin Kaepernick’s decision to kneel during the US national anthem to protest police violence. The protests mushroomed to envelop the entire league and divide the nation – and Kaepernick soon found himself out of a job.

President Donald Trump (among others) called the national anthem protests “unpatriotic” – a powerful charge that made many teams unwilling to sign Kaepernick. To this day, he remains without a playing contract. And fears that player protests are a threat to the NFL brand and television ratings remain. 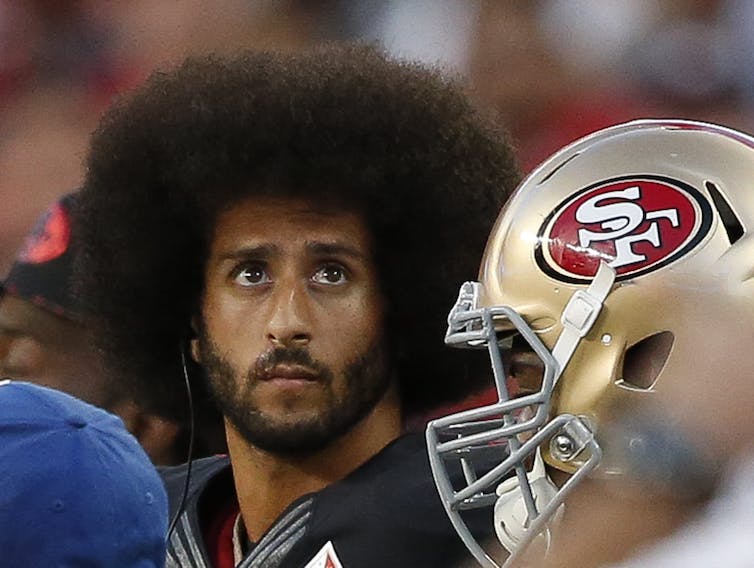 Kaepernick’s boycott inspired calls for similar action in Australia. One of the leaders of this effort, Paul Gorrie, a Gunai/Kurnai and Yorta Yorta musician, artist and activist, said a similar protest was necessary here because:

He and boxer Anthony Mundine called on players to refuse to sing the anthem during the NRL and AFL Grand Finals in 2016, but their plea was met with a mixed response. Despite support from former players, then-Prime Minister Malcolm Turnbull said “everyone should sing and everyone should be proud about our country.” Aboriginal AFL player Lance Franklin even described the protest as “pretty stupid”.

Muted criticism of the protest

The silent dignity of players refusing to sing the anthem during this week’s State of Origin match may motivate others to join in. Yet, the Australian anthem protest movement, thus far, has not been as controversial as the one in the US led by Kaepernick – or had the uptake that Gorrie hoped.

To be sure, the NSW and Queensland players have been criticised by some commentators and fans for their stance on the anthem.

Read more: Booing Adam Goodes – racism is in the stitching of the AFL

But the boycott hasn’t attracted the same level of opposition among league officials or, notably, politicians. Indeed, Queensland captain Daly Cherry-Evans has backed the protests, and there has been no team pressure on the players to sing the anthem.

Significantly, the NRL is also offering tacit support to the protest, with no threat of punishment for those choosing not to sing.

This is in marked contrast to AFL player Adam Goodes’ more vocal stance against racism in sport, which was much more confronting to the country’s dominant racial ideologies.

It is unlikely the State of Origin players will be forced out of the game in the same way that Goodes was. But it would also be naïve to assume that racism is not present in rugby league or other sports today. Aboriginal and Torres Strait Islander athletes continue to be viewed as “Australians when they’re winning, and Aborigines at other times”.

Slow progress on changing the anthem

The lack of a widespread backlash is a good thing. But the lack of dialogue on the anthem issue is not. So far, the hope of a wider discussion of the anthem – and whether it is inclusive of all Australians – has not happened.

As retired Aboriginal player Jonathan Thurston said of the initial reaction to the All Stars protest:

The stand the team took on not singing the national anthem … it was like it was just brushed over.

The National Rugby League, however, has attempted to listen to Indigenous peoples’ concerns about the anthem in the past. For instance, the national anthem has been performed in a number of Aboriginal languages before previous rugby league All Star matches. But the Wurundjeri elders, the traditional inhabitants of the land on which the All Star game was played this year in Melbourne, refused to translate the anthem into the Woiwurrung language.

Read more: Young and free? Why I declined to sing the national anthem at the 2015 AFL Grand Final

The NRL has also played an alternative anthem during the league’s Indigenous rounds with lyrics written by Judith Durham, the lead singer of The Seekers, and Muti Muti singer songwriter Kutcha Edwards. Unlike Advance Australia Fair, this alternative version has received more support from prominent Aboriginal players and officials.

It is time to put Anglo-Celtic sensibilities aside and admit that not all Australians will want to sing an anthem that has associations with the White Australia policy and the country’s colonial past.

In the words of Josh Addo-Carr, another of the State of Origin boycotters:

If it’s not going to stand for my people, why should I sing it?