Leading up to the election, Labor campaigned on an ambitious suite of early childhood policies, including 15 hours of funded preschool for every Australian three-year-old and A$4 billion to increase childcare subsidies.

The Coalition said little about early childhood reform. It did put in place a reformed set of childcare subsidies that came into force in July 2018. These streamlined a previously complex funding system and benefited some (but not all) low-income families.

1. Invest more in preschool, keep an eye on evidence

The evidence for the benefits of quality preschool is well established. So far, the Coalition has committed to another 12 months of funding for four-year-old preschool. But there is a strong case for long-term investment.

Read more: Both major parties are finally talking about the importance of preschool – here's why it matters

School readiness among Australian children has improved since the first national partnership agreement on four-year-old preschool funding in 2009. Ongoing funding would also improve efficiency in preschool provision by allowing providers to plan ahead.

Evidence also shows the earlier children can access quality early childhood services, the better their longer-term learning outcomes are likely to be.

But the jury is still out about what kind of model will best provide these opportunities to Australian children. 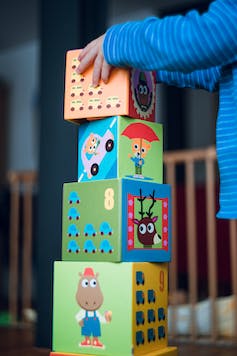 The earlier children can access early childhood education, the better the outcomes. Photo by Markus Spiske on Unsplash

Australia has a complex early childhood sector. An estimated 57.8% of Australian three-year-olds are already enrolled in preschool – although the Australian Bureau of Statistics advises caution in reporting preschool data. This is because “preschool” can mean many things, including stand-alone services, programs in childcare, or preschools located in schools.

The federal government would be smart to keep a close eye on the relative costs and benefits arising from different models as an evidence base to guide future investment.

But there is a widening gap in participation in early childhood services based on family income. Fewer than one-quarter (22.4%) of young children from low-income families used preschool or childcare services in 2017, with a steady decline over the last five years.

While it may be too soon to see an impact from the Coalition’s childcare subsidy reforms, the government should aim for this figure to increase.

Read more: What outcomes parents should expect from early childhood education and care

The Australian E4Kids study – which followed around 2,500 children for five years –found only 7% of disadvantaged children received high-quality educational support compared to 30% of the wealthiest children.

Expanding access to preschool is one way to improve the teaching quality younger children receive. In 2016, 92% of preschools met or exceeded national standards in their educational program, compared to 74% of long daycare services.

One reason is that most preschool educators have degrees and higher qualifications are associated with higher-quality teaching. Effective three-year-old preschool requires skilled teachers who can design specific programs to meet the learning needs of younger children. 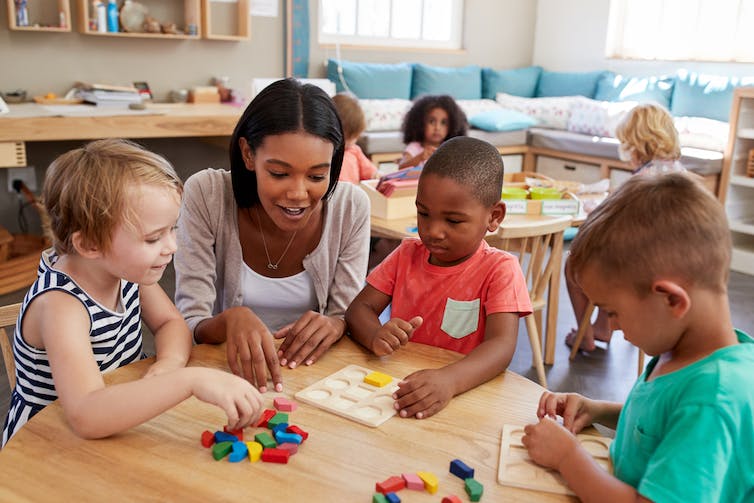 Most of the staff working in early childhood don’t have a university degree – the government could expand their qualifications to improve quality. from shutterstock.com

If the federal government’s appetite for preschool investment is limited, it could also look into developing the skills of the many educators who do not hold university degrees. They make up around 80% of the Australian early childhood workforce.

Australia urgently needs a national strategy to support all educators to develop the skills they need to provide children with high-quality learning experiences.

The national training package for vocational early childhood qualifications is being updated alongside the major review of the Australian Qualifications Framework, which provides the blueprint for Australia’s entire tertiary education sector.

This is the perfect time for governments to take a fresh look at the full suite of education and training options for professionals working with Australia’s youngest children.

Government investment in Australia’s early childhood sector has risen dramatically over the last decade. Quality reforms, such as higher ratios of adults to children, explain part of the increase.

Yet educators’ wages have remained unacceptably low over this period. Staff turnover has also increased – the proportion of educators employed for three years or less (the period of time many children attend childcare) has climbed from 30.3% to 38.2% from 2010 to 2016.

This is not only inefficient, but undermines the stable, caring relationships that help children learn.

The government should look closely at how investment is flowing through the early childhood sector, especially appropriate models of support for for-profit providers. The profitability of early childhood services varies widely, but corporate providers recorded healthy profits during the last decade of government investment. However, this has recently eased due to oversupply.

Given profitability and quality don’t always mix, funding models must ensure every dollar delivers benefits for children and families.

Targeted programs can also help ensure investment reaches those most in need. The evidence base for Australian-based targeted early childhood programs is growing, building on international research.

One example is the Early Years Education Program, providing 145 vulnerable children with three years of tailored high-quality early childhood education and care. This program is already showing an impact on children’s IQ.

Early childhood advocates have long encouraged the two major parties to adopt policies that, evidence shows, will deliver the best opportunity for Australian children to thrive. The challenge is for the Coalition government to design a package of support for early learning that optimises investment and gets the best out of all the types of early childhood services children and families use.