In 1864, four years before his death, Italian composer Gioachino Rossini recalled to his biographer Alexis Azevedo that he would probably have ended up a “chemist or an olive oil salesman” had it not been for the French invasion of Italy. That invasion had begun in 1792, the year of Rossini’s birth.

By 1797, Napoleon Bonaparte had established the short-lived Cisalpine Republic in Northern Italy, in turn raising hopes a unified Italian state might soon emerge. Only two years later, however, an Austro-Russian coalition mounted a successful counter-offensive. Italian unification would not come until 1871.

Nevertheless, in Italy as elsewhere in Western Europe, the Napoleonic age heralded great social and cultural change. Opera houses became places of mass entertainment – Rossini could now contemplate a career as a freelance composer on a scale that had been denied to his forbears such as Handel and Mozart. 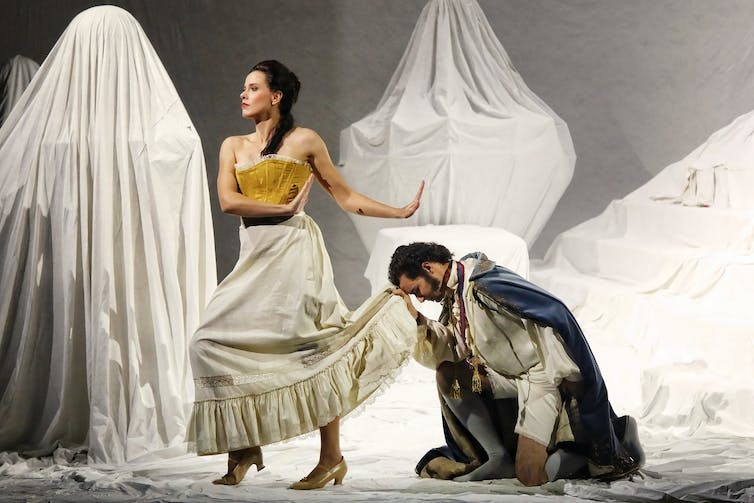 At first it seems ironic that Rossini would eventually compose one of his finest works to celebrate a restored French monarchy. Il Viaggio a Reims (The Journey to Rheims) was conceived as a celebratory cantata (essentially a set of hymns of praise set to music) to mark the coronation of Charles X (1757–1836) and was first performed in Paris on June 19 1825.

Rossini never expected Il Viaggio a Reims to become a repertoire staple. Despite it being a popular triumph at its premiere, it received only four performances. Rossini instead repurposed about half of the music for his later opera Le comte Ory (1828).

It was only through musicological detective work that the original score was returned to life, receiving its first modern performance in 1984. But as a result, we can now appreciate how much Il Viaggio a Reims is as much a work of political satire as political propaganda.

The work is now receiving its first complete staging in Australia in a collaboration between Opera Australia, Dutch National Opera, and the Royal Danish Theatre. 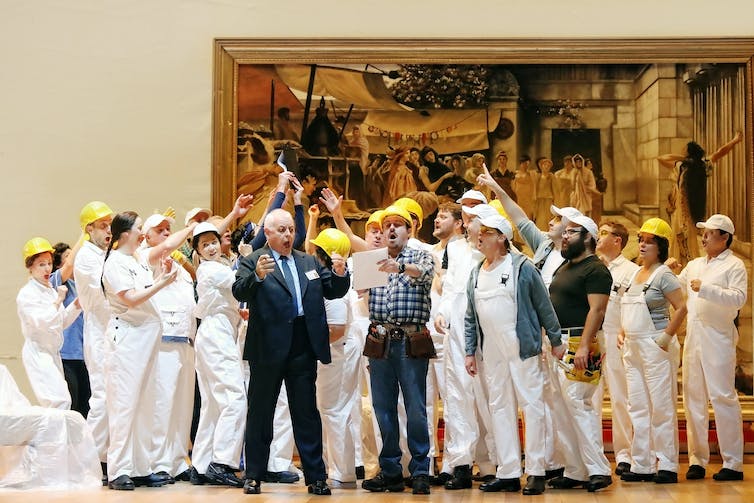 The opera’s plot setup is one familiar to us due to murder mysteries such as Agatha Christie’s, Murder on the Orient Express, or Quentin Tarantino’s, The Hateful Eight. In these, an ensemble of eccentric characters are forced to spend time with each other due to unforeseen circumstances.

In the original work, a group of aristocrats from Germany, Poland, Russia, Spain, England, Italy and France arrive at a hotel in the spa town of Plombières-les-Bains, on their way to Rheims Cathedral for Charles’ coronation. A lack of available horses to take them the remaining 300 odd kilometres, however, thwarts their plans.

But their sojourn provides the excuse for a kind of allegorical diplomatic convention in song; the Concert of Europe in concert, no less.

The fact that the desired journey to Rheims never actually eventuates is one of a number of elements that suggests Rossini, and his librettist Luigi Balocchi, set out to subtly satirise some of the political pretensions of royalist France.

Charles’ decision to be crowned in Rheims was a deliberate act of provocation to his anti-royalist enemies. The last French king to have been crowned there had been the ill-fated Louis XVI. Constructing a commemorative work of theatre in which an imagined group of guests did not make it to Rheims for the occasion suggested an implied commentary concerning the credibility of Charles’ enthronement.

Perhaps unsure how to engage a modern audience with such elements of historical political intrigue, director Damiano Michieletto’s production instead shifts the time and place to a present-day art museum on the cusp of a major exhibition opening. 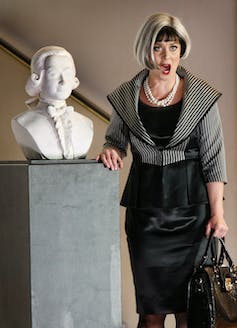 The remaining assemblage of foreign nationals are transformed into the subjects of paintings that progressively emerge from their frames or their packing cases in a manner reminiscent of Shawn Levy’s film Night at the Museum, or Gilbert and Sullivan’s satirical opera Ruddigore.

While this directorial fancy does nothing to alleviate the work’s already episodic nature, there is no doubt it also makes for a very entertaining evening on the stage. 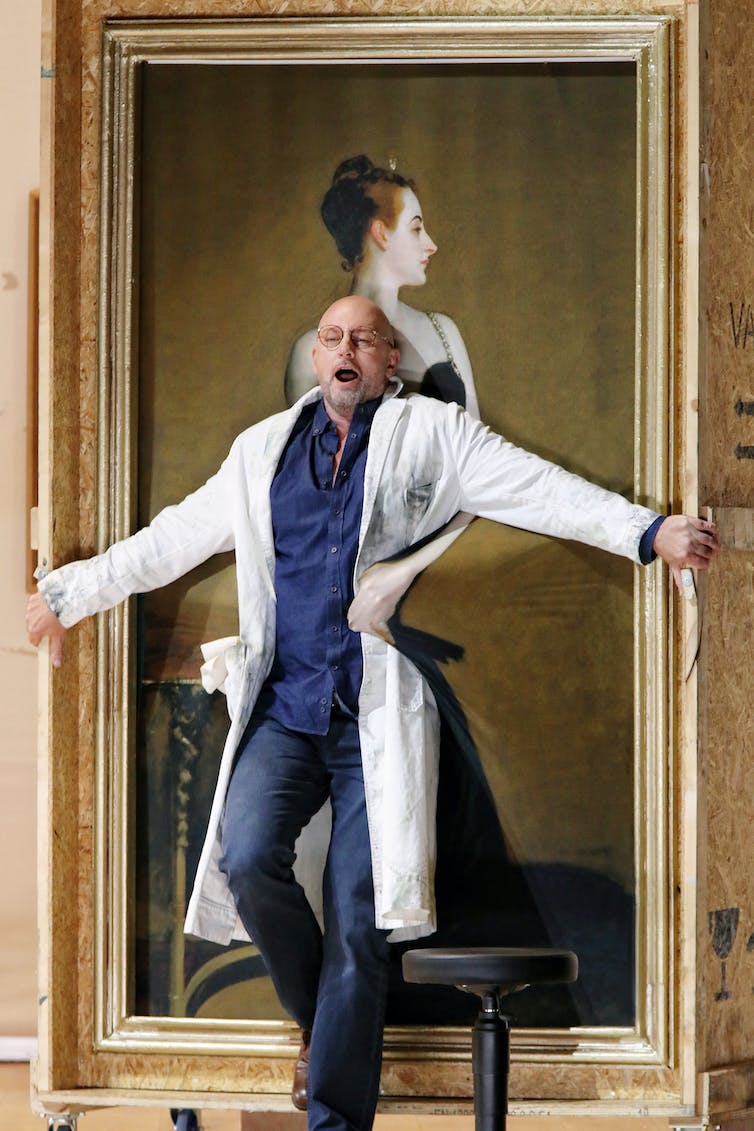 The original context of the work is nevertheless eventually acknowledged, in spectacular fashion, when Paolo Fantin’s lavish set and the whole ensemble combined to recreate the painting “The coronation of Charles X” (1827) by François Gérard at the opera’s conclusion.

Standouts among the 14 principals include baritone Warwick Fyfe, who gave a marvellous comic turn as the Barone di Trombonok, and tenor Juan de Dois Mateos (Cavalier Belfiore) and sopranos Ruth Iniesta (Corinna) and Emma Pearson (Contessa di Folleville), who each sang with great beauty and virtuosity.

Orchestra Victoria delivered Rossini’s sophisticated score with great style, thanks to the superb direction of Daniel Smith (making a well overdue debut in his native Australia), fine continuo accompaniment work from Anthony Hunt on a fortepiano, and some terrific solo work from Lisa-Maree Amos (flute) and Megan Reeve (harp).

The second of these forms the inevitable song of praise to Charles which closes the opera. But it is the first (which itself slyly references the contemporaneous Greek struggle for liberation from Ottoman rule) that I suspect directs us to the more universal political message that Rossini wished to convey: the hope that “one day the dawn of the golden age will reappear, and fraternal love will reign in human hearts.”

Il Viaggio a Reims is on at Arts Centre Melbourne until June 1.