“It belongs in a museum.” With these words, Indiana Jones, the world’s best-known fictional archaeologist, articulated an association between archaeologists, antiquities, and museums that has a very long history. Indeed, even Jones himself would likely marvel at the historic setting of the world’s first “museum,” and the remarkable woman who is believed to have been its curator, the Mesopotamian princess, Ennigaldi-Nanna.

Ennigaldi-Nanna was the priestess of the moon deity Sin, and the daughter of the Neo-Babylonian king, Nabonidus. In the ancient Mesopotamian city of Ur, around 530BCE, a small collection of antiquities was gathered, with Ennigaldi-Nanna working to arrange and label the varied artefacts. 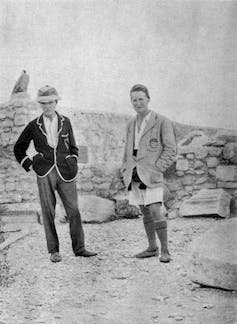 This collection was considered by the British archaeologist, Sir Charles Leonard Woolley, to be the earliest known example of a “museum”.

In 1925, Woolley and his team were excavating at Ur (now in the Dhi Qar governate of southern Iraq). They discovered a curious collection of artefacts among the ruins of a Babylonian palace. Especially unusual was that while the items were from different geographical areas and historical settings, they were neatly assembled together.

An example of Sumerian script on a foundation tablet 2144-2124 BCE (Lagash II; Ur III). The Walters Art Museum

The items ranged in dates from around 2100 BCE to 600 BCE. They included part of a statue of the famous early king, Shulgi of Ur, who ruled around 2058 BCE, a ceremonial mace-head made of stone, and some texts. The statue, Woolley observed, had been carefully restored to preserve the writing.

There was also a Kassite boundary stele (called a “kudurru”), a written document used to mark boundaries and make proclamations. The stele was dated to around 1400 BCE, and contained, Woolley noted, a “terrific curse” on anyone who removed or destroyed the record it contained.

Many items were accompanied by labels giving details about the artefacts. These were written in three languages, including Sumerian. The labels have been described in modern scholarship as early examples of the “metadata” that is so critical to the preservation of antiquities and the historical record.

The museum, over 2,500 years old, was centred on cultural heritage, and it is thought to have perhaps had an educational purpose. Along with her other roles, Ennigaldi-Nanna is believed to have run a scribal school for elite women.

When considering the discovery, Woolley noted that the discovery of a museum associated with the priestess was not unexpected, given the close connection between religious specialists and education. He also commented on the “antiquarian piety” of the time of the museum’s construction — an interest in history was a common feature among monarchs from the Neo-Babylonian period.

A family fascination with history

Indeed, Ennigaldi-Nanna’s appreciation for the past seems to have been a family trait. Her father Nabonidus had a fascination with history which led him to conduct excavations and discover lost texts. Many of the items in the collection were discovered by him, with Nabonidus sometimes described in the modern day as the world’s first archaeologist. 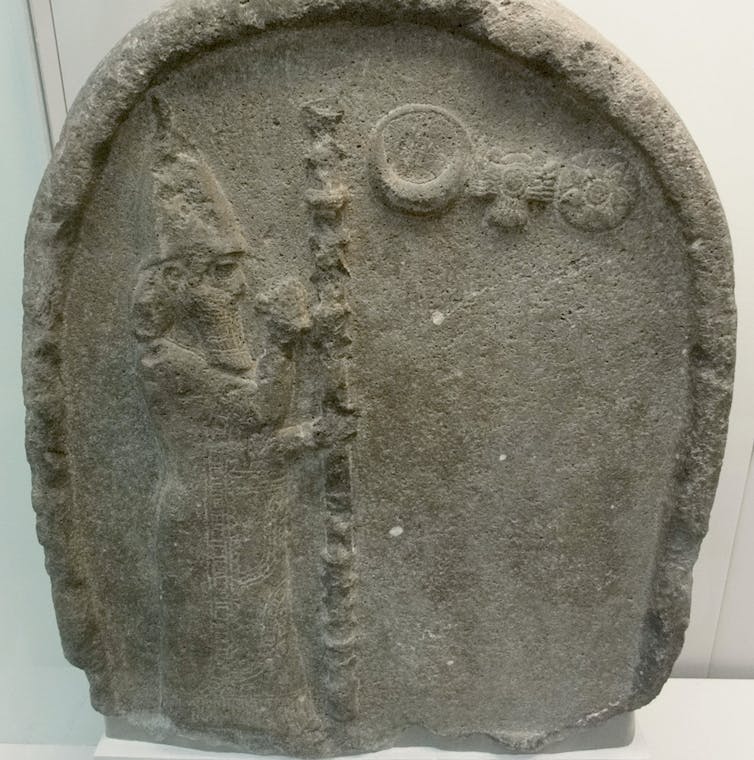 Stela of Nabonidus made of basalt. Wikimedia Commons

Nabonidus was the last king of the Neo-Babylonian Empire, and a religious reformer. His eldest son, Belshazzar, ruled as his regent for many years, but is perhaps best known for his appearance in the biblical Book of Daniel. In a famous scene, the unfortunate regent sees the end of the Neo-Babylonian kingdom coming when it is foretold through the writing of a disembodied hand on a wall.

King Nabonidus’ interest in history didn’t end with archaeology. He also worked to revive ancient cultic traditions relating to the moon deity, Sin (Sumerian Nanna). His daughter Ennigaldi was an important part of these efforts, indeed, her name is an ancient Sumerian one, meaning “the priestess, the desire of the Moon god.” 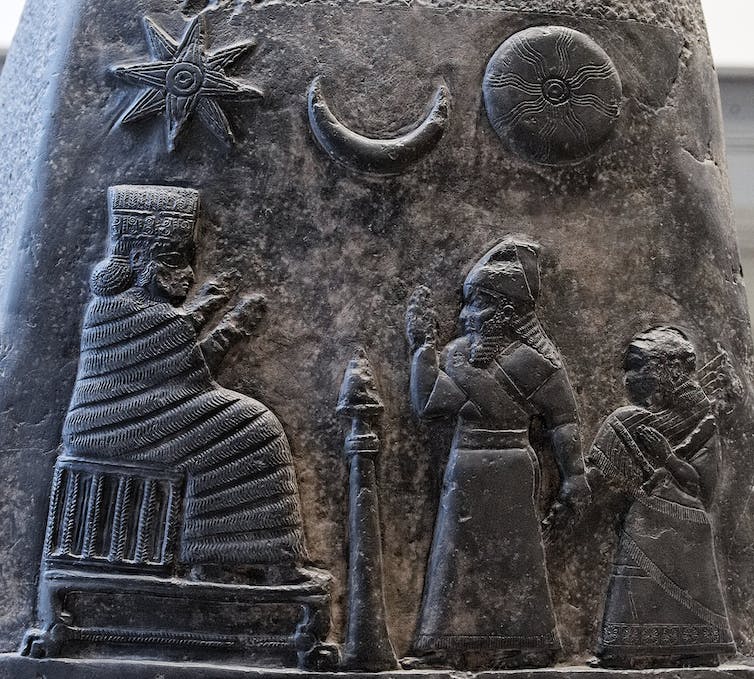 A boundary stele/kudurru showing King Melishipak I (1186–1172 BC) presenting his daughter to the goddess Nannaya. The crescent moon represents the god Sin, the sun the Shamash and the star the goddess Ishtar. Wikimedia Commons

The appointment of Ennigaldi as high priestess in Ur reinvigorated a historical trend made famous by Sargon of Akkad, who installed his daughter, the poetess Enheduanna, in the role over 1000 years earlier.

By the time of Ennigaldi-Nanna’s appointment, the religious role she would inhabit had long been unoccupied, and the rituals associated with the post had been forgotten. Nabonidus, however, describes finding an ancient stela belonging to Nebuchadnezzar I, and using it to guide his actions.

The historic aspects of the appointment of Ennigaldi-Nanna were further emphasised by Nabonidus when noting his research into the requirements of her role. The king describes consulting the writings of a previous priestess, a sister of the ruler Rim-Sin named En-ane-du.

Rim-Sin reigned over 1200 years before Nabonidus came to power. While some scholars doubt Nabonidus’ discovery of the stela of Nebuchadnezzar I, his recovery of the writings of the priestess, En-ane-du, has greater acceptance. 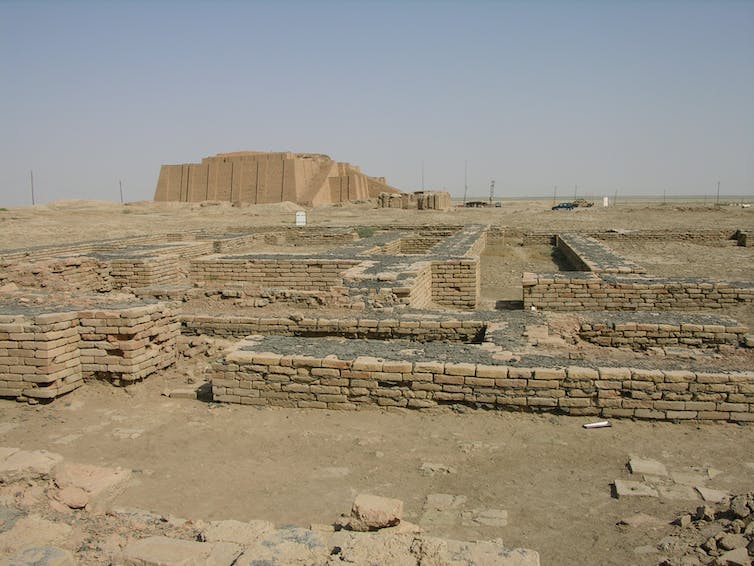 Ruins in the town of Ur, Southern Iraq, photographed in 2006. Around 530BCE, a small collection of antiquities was gathered here, with Ennigaldi-Nanna working to arrange and label the varied artefacts. Wikimedia Commons

Ennigaldi is largely unknown in the modern day. An exception to her modern anonymity may be found in the luxury fashion line, Ennigaldi, which creates pieces inspired by ancient Babylonian architecture.

While relatively little is known of the life of Ennigaldi, there are other well-known women in her family tree. Ennigaldi’s grandmother, Adad-guppi, was also a powerful priestess involved in the political world of her son, Nabonidus. Adad-guppi is best known in the present day from her “autobiography,” a cuneiform account of her life, written in the first person. Adad-guppi’s autobiography records the blessings she received from the moon deity such as living to the age of 104 with a sound mind and body.

The city of Ur and its museum were abandoned around 500 BCE, due to deteriorating environmental conditions. These included a severe drought, along with changing river and silt patterns. The prevalence of drought has also been cited as a likely cause of the falls of many earlier kingdoms from the Bronze Age.

The story of the world’s first known museum, its curator, and her family, shows the timeless appeal of conserving the treasures of the past. At the same time, the disappearance of this early institution of learning over two millennia ago demonstrates the significant overlap in the important areas of cultural heritage and environmental conservation.