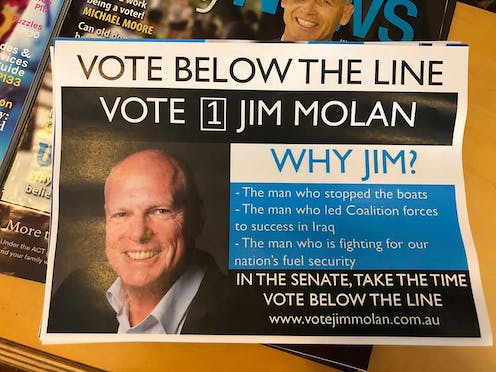 Nationals federal president Larry Anthony has added his weight to a call by the NSW party for supporters to vote “below the line” in the Senate, in retaliation against the campaign by maverick Liberal senator Jim Molan to get voters to buck the Coalition’s joint ticket.

Molan, a rightwinger who was relegated to an unwinnable fourth place on the ticket, is canvassing for votes to go to him personally rather than to the ticket.

He has no prospect of being elected but the votes he takes from above the line harm the Nationals’ chances of getting their candidate Perin Davey elected.

Votes “above the line” are for a party or group; “below the line” is where candidates are listed individually.

A furious NSW Nationals organisation accused Molan’s backers of breaking the Coalition agreement for the joint ticket and asked its party members to tell people to vote below the line to maximise Davey’s prospects.

Davey has third place on the joint ticket, behind the two Liberal candidates, making her chances already very precarious.

Anthony said on Wednesday night: “We had an agreement with the Liberal Party and Perin Davey is a very good candidate. If there is a group of people suggesting a vote below the line then we will reciprocate. It will have an impact [on the Nationals vote] and we’re responding accordingly”.

In an email to party members, the Nationals’ NSW chairman Bede Burke and director Ross Cadell said: “Supporters of Liberal senator Jim Molan have taken it upon themselves to campaign for a ‘below the line’ vote, which in our view, breaks the Coalition Agreement and seriously harms the chances of a Nationals Senator being elected.

"That is why we are asking you to vote below the line on the Senate ballot paper, for The Nationals’ Perin Davey and Sam Farraway”.

Unless Davey is elected there will be no NSW Nationals senator. John “Wacka” Williams, from NSW, is retiring at the election.

“We must continue to have a strong, regional voice in the Senate fighting for our communities,” Burke and Cadell said.

They said they had “no choice” but to follow suit after an increase in campaigning from Molan’s supporters, and “actively encourage everyone to vote below the line” for the Nationals’ candidates. “This is the only way to guarantee our communities have a voice in the Senate,” they said.

“We are not taking this extraordinary step lightly. The Coalition Agreement is something that is fundamental to our ability as Nationals to deliver for our regions.”

Asking people to vote below the line “is not something we want to do”, but the party needed every one its members to do so “and to encourage everyone they know to do the same”.

Molan said he did not want to comment, beyond saying that on Wednesday he had been handing in the seat of Whitlam for the Nationals candidate and would be handing out for Andrew Gee, the Nationals MP in Calare on Thursday.

But the Nationals are concerned about the potential erosion of votes for the Senate ticket in these regional areas.

The Prime Minister’s Office said the issue was a matter for the party headquarters. HQ referred to comments by the deputy leader of the Liberal party Josh Frydenberg - who had dodged the question, telling a news conference “matters for New South Wales are matters for the organisation”.

Labor’s campaign spokesman Jim Chalmers said the NSW fight “is the final proof that the Liberals and Nationals are a dumpster fire of disunity and dysfunction”.