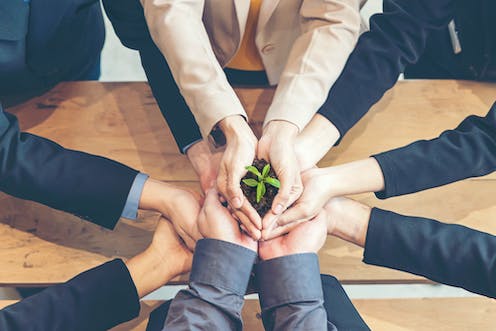 How little things have changed in the last six years. Back in 2013 I wrote an article for The Conversation called “Wanted: political leader with a vision for a sustainable future”.

Like most people, I hoped climate policy would improve, but years of infighting and adversarial politics have resulted in a dearth of climate action, where cooperation might well have yielded positive results.

One solution to this frustrating deadlock is to place the responsibility for climate policy at arm’s length from political actors. We need a Council for the Future, tasked with the long-term thinking that eludes so many of our elected representatives.

Experience has shown that the Coalition government has difficulty speaking with one voice on leadership and policy, let alone promoting collaboration with the opposition or minor parties. Labor also has had its problems in the past.

We are still waiting for a good leader and indeed a system that is up to the challenge. Climate change is now generally recognised as a serious threat to civilisation, not least because we have had years of worsening climate catastrophes.

Global movements for change, including (but not limited to) School Strike 4 Climate and Extinction Rebellion, have also brought climate change to the forefront of our collective consciousness. For this Australian election, climate change is deservedly a major issue.

However, even during this election campaign many politicians have continued to fiddle around the edges, fudge the figures, scaremonger and hedge their bets by appealing to the hip-pocket nerve.

Power may be intoxicating, but we are being sold short when leaders and politicians see retaining their positions as more important than finding a safe and equitable future for the people they represent. Leaders must moderate self-interest, and search for answers, even if subsequent compromise within government might become necessary.

And when we, the voters, mark our ballot papers, the integrity and vision of the candidates and leaders must be foremost in our minds.

It is time to ask ourselves why our democracy is stumbling in the face of such important issues.

Part of the answer lies in the fact that governments are rarely representative since most voters support an ideology that lies in the middle of the political spectrum, and yet in Australia we generally choose between two almost equally popular parties: a conservative coalition, the LNP, which extreme conservatives have dragged to the right, and Labor, which is ostensibly left-wing but not radically so, capturing much of the middle ground. The result in our winner-takes-all system is nasty, adversarial politics and rotating governments.

Long-term, global problems are also problematic because many of us feel conflicted when long-term, rather abstract interests seem incompatible with short-term self-interest. Our ability to think rationally about the future is limited by human nature, as most of our judgments are made instinctively, using a form of cognition that is rapid but emotional and subject to a broad range of biases.

However, consensus on intractable problems is still possible. It’s time to create a Council for the Future, made up of experts on climate change, sustainability, economics and psychology, together with representatives of the various parties.

Such a council should have responsibility for policy, much as the Reserve Bank determines financial policy, independent of government. Right now is the time for a major party to commit to such a policy, and I believe such a model would win support in the electorate. This body would ensure continuity of policy and set long-term targets, sorely needed by business.

Our incoming government, perhaps with the assistance of such a Council for the Future, could break free from the paralysis that currently besets our democracy.

It could make bold financial commitments to policy that will help keep warming under the Paris guardrail. And, at the same time, it could promote industries in solar energy, wind energy, pumped hydro, electric vehicles, irrigation and farming, together with associated processing industries, thereby also easing unemployment.

Read more: Wanted: political leader with a vision for a sustainable future

It could explore models for rapid transition to renewable energy, using incentives and disincentives to satisfy our desire for fairness. Gradually introducing surcharges that incorporate social and environmental costs would decrease consumption and moderate growth, and are fairer than an across-the-board increase in GST.

Other ways to moderate growth might include reduced working hours as an optional alternative to increased salaries, and reducing the salary “arms race”, particularly in the corporate sector.

Our leaders have a unique responsibility because only governments can implement the major changes we need and also create incentives that encourage citizens to act in humanity’s best interests.

Authors: Helen Camakaris, Visitor in the School of Biosciences, University of Melbourne

How do we actually investigate rare COVID-19 vaccine side-effects?

COVID virus fragments have been detected in sewage in my area. What does that mean and what should I do?