In the north-east corner of Australia’s most populous state of New South Wales is a small former dairying and banana farming community. Today, however, that village is unrecognisable.

Nimbin is now widely acknowledged as Australia’s counter-cultural capital, a sister city to both Woodstock in New York State and Freetown Christiania in Denmark.

Among Nimbin’s tourist attractions today are its Hemp Embassy and the annual Mardi Grass festival in early May, which argues for the legislation of marijuana for personal and medicinal use.

The village’s transformation from a rural farming community to its present form can be traced to 1973, when Nimbin became the unlikely host of the Aquarius Festival – a counter-culture arts and music gathering presented by the radical Australian Union of Students. 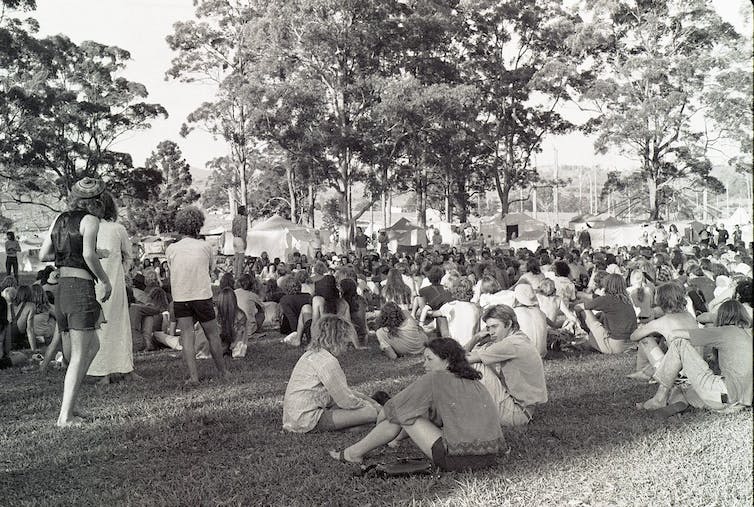 A scene from the first Aquarius Festival in Nimbin, 1973. Flickr/harryws20/Harry Watson Smith, CC BY

Why is Nimbin the way it is?

These social and political origins of the commodified hippie culture on display today in Nimbin have become less apparent to visitors and more recent migrants to the region.

Visitors, especially those arriving on bus tours, tend to shop, buy coffee and leave again. To counter this, the Nimbin Tourism Office commissioned me in 2016 to produce an app-based audio walk to promote a deeper engagement for tourists with the town and help answer the question: why is Nimbin the way it is?

The audio walk, an adapted version of which features on today’s episode of Essays On Air, was published onto the GPS-enabled mobile phone app Soundtrails. Soundtrails is owned by The Story Project, an Australian organisation focusing on oral history-based audio walks and they’ve published more than a dozen such walks in regional Australia. 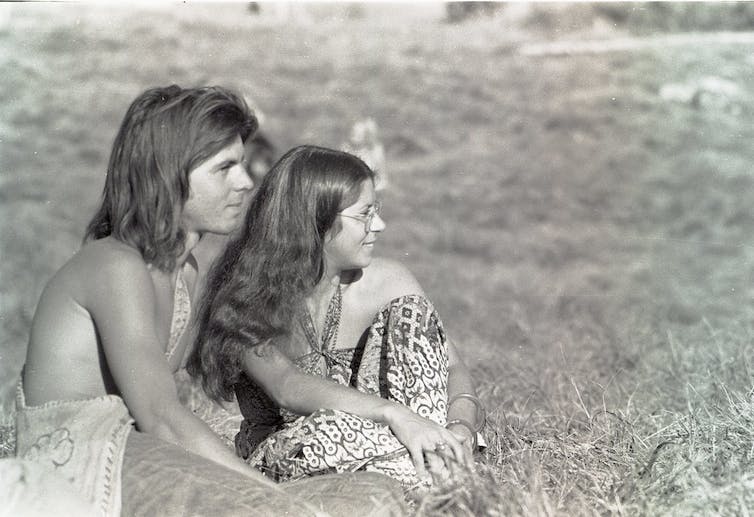 A scene from the first Aquarius Festival in Nimbin, 1973. Flickr/Harry Watson Smith/harryws20, CC BY

Anyone with a smartphone can access it by downloading the app and the Nimbin audio walk and following the route through the village’s streets and parklands. Headphones provide the best experience.

The stories I share with you today are excerpts from the Nimbin Soundtrail and are drawn from consultations and interviews with more than 60 Nimbin residents, Aquarius Festival participants and Indigenous elders.

Here, I’ve tried to reconnect the past and the present to make clear how Nimbin became the counter-cultural capital that it is. And the caveat is that many of the events in this documentary walk happened more than 40 years ago. I’ve recognised that memories have merged with other retellings that evolved over the years and the definitive truth is perhaps unavailable. Any version of Nimbin’s counter-culture will be an incomplete history.

The nine months it took me to gather these stories and make some sense of how they fitted together were rewarding.

And while there are some who might dispute the accounts of what happened in these stories, others agree that it’s a fair record of Nimbin contemporary history. The full Nimbin soundtrack can be heard by downloading the Soundtrails app and listening here. And if you are ever in the area, I invite you to take a day out, visit and listen to the stories in town. 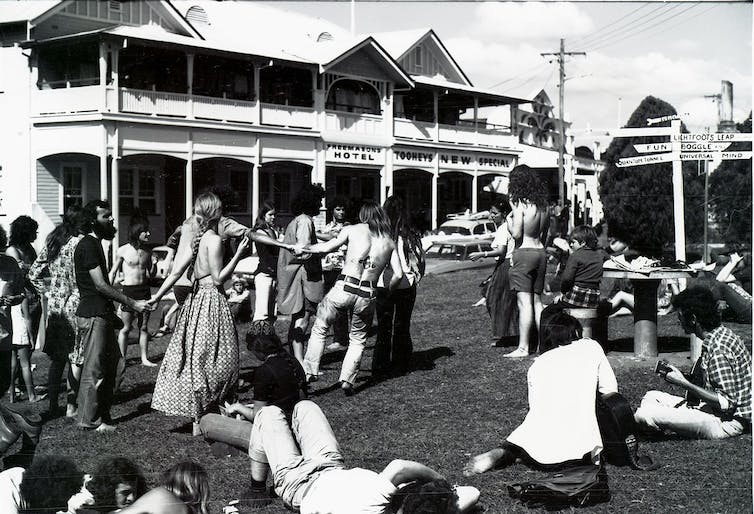 A crowd at the Nimbin Hotel during the first Aquarius Festival, Nimbin, 1973. Flickr/Harry Watson Smith, CC BY

Podcasts are often best enjoyed using a podcast app. All iPhones come with the Apple Podcasts app already installed, or you may want to listen and subscribe on another app such as Pocket Casts (click here to listen to Essays On Air on Pocket Casts).

You can also hear us on PlayerFM or any of the apps below. Just pick a service from one of those listed below and click on the icon to find Essays On Air.

This podcast contains excerpts from the Nimbin Soundtrail, used with grateful permission from The Story Project/Soundtrails. See the app for the walk’s full credit list.

Selections of original music from the Nimbin Soundtrail by Neil Pike.

Jeanti St Clair would like to again thank Lismore City Council and Nimbin Tourism for commissioning the Nimbin Soundtrail, and all the many contributors to the audio walk.