With taxes, health care and climate change emerging as key issues in the upcoming federal election, we’re running a series this week looking at the main issues that swung elections in the past, from agricultural workers’ wages to the Vietnam War. Read other stories in the series here.

Johannes (Joh) Bjelke-Petersen’s reign as Queensland’s premier began in 1968 and came to a dramatic and inglorious end 19 years later with the Fitzgerald Inquiry into police corruption. He is still Queensland’s longest-serving premier, but he leaves a complicated legacy. For many, he is remembered most for his rigid control of over all areas of government and his anti-democratic stance on public protests.

Bjelke-Petersen governed the state as leader of the Country Party (which later became the National Party) until his downfall in 1987.

In May that year, the ABC television programme Four Corners aired the first public allegations of organised crime and police corruption in Queensland. Bjelke-Petersen would hang on to office for only a few more months before being forced to step down.

The Fitzgerald Inquiry, launched in the aftermath of the Four Corners programme, continued for another two years, uncovering a deep and systematic web of corruption that implicated many at the highest levels of Queensland government and the Queensland Police Force.

Read more: The man who would be commissioner: Bjelke-Petersen's crooked pick

For Bjelke-Petersen, not only was his career as a state premier over, but so, too, were his national ambitions. In early 1987, Bjelke-Petersen had launched an ill-fated “Joh for PM” campaign in a brazen attempt to challenge then-Liberal Party leader John Howard as head of the Coalition, then run against Prime Minister Bob Hawke in that year’s federal election.

His bid for power split the federal Coalition. Capitalising on the internal dissent of the Opposition, Hawke easily won the 1987 election, holding onto the prime-ministership for another four years.

An ill-fated run for federal office

Hawke’s win in the 1987 election had been far from inevitable. The Coalition had actually been ahead in the polls for much of Hawke’s 1984-1987 term. However, internal divisions, typified by the rivalry between Howard and Andrew Peacock over the Liberal leadership, put pressure on the party. Tensions were further stoked when Bjelke-Petersen announced his intention to enter the federal arena.

In January 1987, when Bjelke-Petersen announced that he intended to run for parliament, he assumed that his success in Queensland could be duplicated at the federal level. Fresh from a win in the state election the previous year, he and his backers did not acknowledge the distinctive set of circumstances in Queensland that had given rise to his long time in office.

His bid for PM did make a brief splash in the national media, drawing further attention to the deep ideological rifts within the federal Coalition. Howard, leader of the Liberals, and Ian Sinclair, leader of the Nationals, struggled to contain the division caused by Bjelke-Petersen’s ambitions. The discord reached a breaking point at the end of February 1987, when the Queensland National Party decided to withdraw its 12 federal MPs from the Coalition in support of Bjelke-Petersen’s efforts. The Coalition formally split soon after.

Hawke seized on the Coalition’s infighting and quickly called an election on May 27. Bjelke-Petersen was not even in the country at the time, having gone to the United States. Outplayed and dealing with increased coverage of corruption and dissent in Queensland, Bjelke-Petersen swiftly abandoned his plan to run for prime minister.

Read more: The larrikin as leader: how Bob Hawke came to be one of the best (and luckiest) prime ministers

By the end of the year, Howard’s Coalition was fatally divided. Labor was returned to government and increased its majority in the House with 86 seats to 43 for the Liberals and 19 for the National Party.

The win allowed Hawke to take his place in history as the party’s longest-serving prime minister. 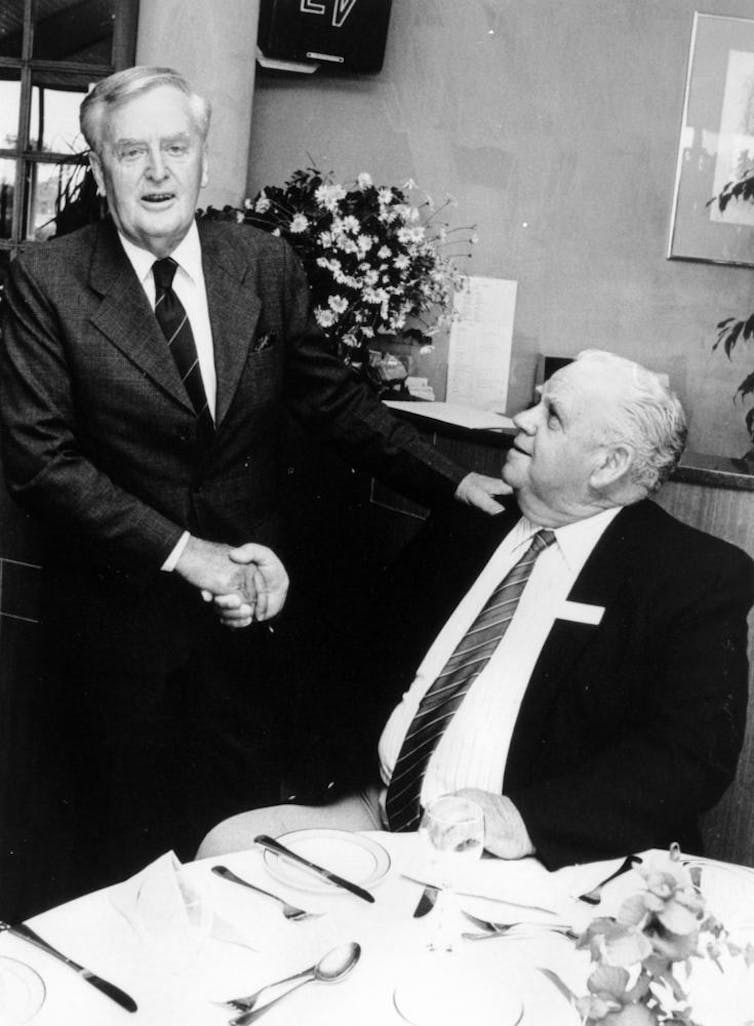 A tarnished legacy in Queensland

The failings of the Bjelke-Petersen government in Queensland extended far beyond the arrogance that saw him attempt an ill-conceived move into federal politics.

Under his leadership, Queensland was not democratic. His government exploited the state’s electoral gerrymander, which over-represented rural electorates at the expense of urban ones. The state’s unicameral parliament meant the checks and balances a second house would have provided were absent.

Bjelke-Petersen also relied on a police force rife with corruption to prop up his government. Dissenters faced brutalisation at the hands of police when they took to the streets. A repressive set of laws that banned protests meant taking to the streets could result in time in prison. For too long, the media were silent about the corruption taking place in the state.

Journalist Evan Whitton called Bjelke-Petersen “the hillbilly dictator” in reference to his carefully cultivated parochial style of leadership. Yet, Bjelke-Petersen was guided by a shrewd political awareness. He styled himself as a defender of a unique Queensland sensibility and scorned the more progressive southern states. He was not opposed to using fear and prejudice for electoral gain.

His treatment of LGBTIQ issues provides one strong example. During the 1980s, the Bjelke-Petersen government made efforts to prevent gay and lesbian teachers from being employed and gay students from forming support groups. When the AIDS epidemic reached Australia, his government demonised LGBTIQ individuals. As most other Australian states decriminalised sex acts between men, Bjelke-Petersen’s government attempted to introduce anti-gay licensing laws and criminalise lesbianism. In 1986, the Sturgess Inquiry into Sexual Offences Involving Children and Related Matters was used by the government to further ostracise gays and lesbians and turn the public against them.

The Bjelke-Petersen era provides a cautionary tale. It is difficult to imagine any other premier maintaining his or her position for this long again. His ill-fated bid for federal politics also reveals the impact that egomaniacal and divisive figures can have on political parties.

Bjelke-Petersen may not have been the only factor behind Hawke’s 1987 win, but his intervention certainly did Howard no favours – and deepened a rift in the Coalition that took years to mend.