This week saw the closure of Google+, an attempt by the online giant to create a social media community to rival Facebook.

If the Australian usage of Google+ is anything to go by – just 45,000 users in March compared to Facebook’s 15 million – it never really caught on. 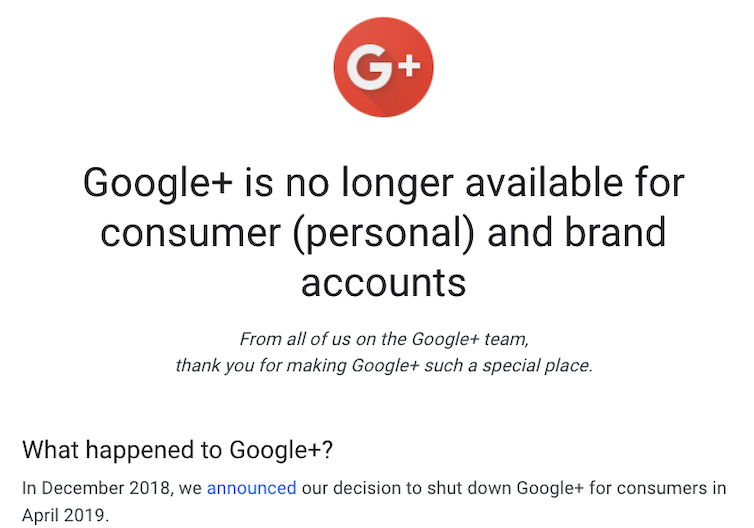 Google+ is no longer available to users. Google+/Screengrab

But the Google+ shutdown follows a string of organisations that have disabled or restricted community features such as reviews, user comments and message boards (forums).

So are we witnessing the decline of online communities and user comments?

One of the most well-known message boards – which existed on the popular movie website IMDb since 2001 – was shut down by owner Amazon in 2017 with just two weeks’ notice for its users.

This is not only confined to online communities but mirrors a trend among organisations to restrict or turn off their user-generated content. Last year the subscription video-on-demand website Netflix said it no longer allowed users to write reviews. It subsequently deleted all existing user-generated reviews.

Other popular websites have disabled their comments sections, including National Public Radio (NPR), The Atlantic, Popular Science and Reuters.

Organisations have a range of motivations for taking such actions, ranging from low uptake, running costs, the challenges of managing moderation, as well as the problem around divisive comments, conflicts and lack of community cohesion.

In the case of Google+, low usage alongside data breaches appear to have sped up its decision.

NPR explained its motivation to remove user comments by highlighting how in one month its website NPR.org attracted 33 million unique users and 491,000 comments. But those comments came from just 19,400 commenters; the number of commenters who posted in consecutive months was a fraction of that.

We’ve reached the point where we’ve realized that there are other, better ways to achieve the same kind of community discussion around the issues we raise in our journalism.

Likewise, The Atlantic explained that its comments sections had become “unhelpful, even destructive, conversations” and was exploring new ways to give users a voice.

In the case of IMDB closing its message boards in 2017, the reason given was:

[…] we have concluded that IMDb’s message boards are no longer providing a positive, useful experience for the vast majority of our more than 250 million monthly users worldwide.

The organisation also nudged users towards other forms of social media, such as its Facebook page and Twitter account @IMDB, as the “(…) primary place they (users) choose to post comments and communicate with IMDb’s editors and one another”.

Unsurprisingly, such actions often lead to confusion, criticism and disengagement by user communities, and in some cases petitions to have the features reinstated (such as this one for Google+) and boycotts of the organisations.

But most organisations take these aspects into their decision-making. 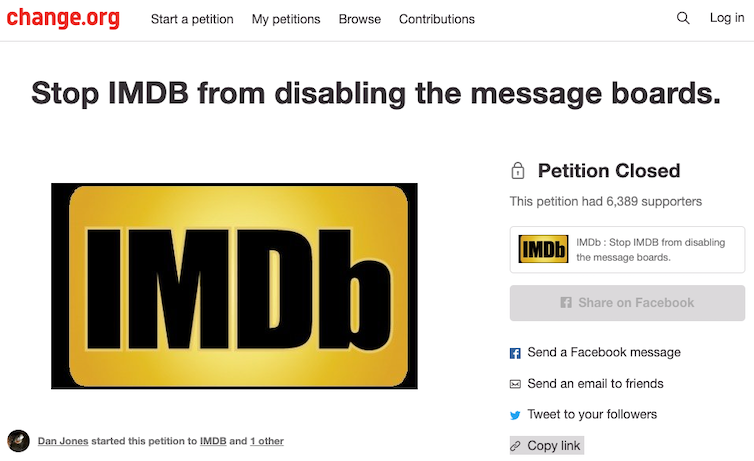 The petition to save IMDB’s message boards. Change.org/Screengrab

For fans of such community features these trends point to some harsh realities. Even though communities may self-organise and thrive, and users are co-creators of value and content, the functionality and governance are typically beyond their control.

Community members are at the mercy of hosting organisations, some profit-driven, which may have conflicting motivations to those of the users. It’s those organisations that hold the power to change or shut down what can be considered by some to be critical sources of knowledge, engagement and community building.

In the aftermath of shutdowns, my research shows that communities that existed on an organisation’s message boards in particular may struggle to reform.

This can be due to a number of factors, such as high switching costs, and communities can become fragmented because of the range of other options (Reddit, Facebook and other message boards).

So it’s difficult for users to preserve and maintain their communities once their original home is disabled. In the case of Google+, even its Mass Migration Group – which aims to help people, organisations and groups find “new online homes” – may not be enough to hold its online communities together.

The trend towards the closure of online communities by organisations might represent a means to reduce their costs in light of declining usage and the availability of other online options.

It’s also a move away from dealing with the reputational issues related to their use and controlling the conversation that takes place within their user bases. Trolling, conflicts and divisive comments are common in online communities and user comments spaces.

But within online groups there often exists social and network capital, as well as the stock of valuable knowledge that such community features create.

Read more: Zuckerberg's 'new rules' for the internet must move from words to actions

Often these communities are made of communities of practice (people with a shared passion or concern) on topics ranging from movie theories to parenting.

They are go-to sources for users where meaningful interactions take place and bonds are created. User comments also allow people to engage with important events and debates, and can be cathartic.

Closing these spaces risks not only a loss of user community bases, but also a loss of this valuable community knowledge on a range of issues.