In his surprisingly dark and often shocking account of life at a New York performing arts school, Alan Parker’s Fame (1980) exposes the way youthful exuberance and vulnerability are easy prey for those who manipulate and abuse their position.

The fim depicts public humiliation, shaming, racism, attempted suicide, drug abuse and homophobia. But perhaps the most horrific sequence is when aspiring actress Coco (played by Irene Cara) is preyed on by a sleazy filmmaker. She turns up for a sham screen test and is coerced into removing her blouse.

“You’re acting like a dumb school kid … I thought you were a professional,” the older man cajoles as he manipulates her inexperience to achieve his own ends. The film’s narrative treats such behaviours as the inevitable reality of a highly competitive and hierarchical working environment.

“Performers aren’t safe,” declares one of Coco’s fellow students shortly after her trauma. “We’re the pie in the face people remember.”

Fame exquisitely captured the vulnerability of creative students in 1980.

Forty years since Fame hit screens, in the wake of the #MeToo movement and as we emerge from COVID-19 physical distancing measures, there is still more that can be done to protect those seeking to pursue careers in the performing arts.

Read more: Don't stand so close to me – understanding consent can help with those tricky social distancing moments

High-profile cases in the industry as well as more recent incidents in the training sector locate sexual harassment and exploitation within hierarchical power structures that provide a fertile breeding ground for abuse.

Within the context of performer training, the blurred boundaries between personal and professional modes of communication – together with a tendency to confuse the need for “professional discipline” with “passive obedience” – produces an atmosphere of uncertainty and self-doubt. Students can feel completely disempowered.

While abusive behaviours are by no means exclusive to the entertainment industry or performing arts education, traditional power structures and outmoded values provide a natural home for offenders.

According to a British Dignity in Study survey conducted of 600 students at specialist drama schools, music colleges, conservatoires, dance colleges and universities in 2018, a staggering 57% had experienced inappropriate behaviour. And 57% of those students did not report the behaviour.

Some perceived it as “culturally acceptable”; others feared the perpetrator or reputational damage. Of the students who did report concerns, 48% remained dissatisfied with the outcome and 79% of this group indicated no corrective action was taken.

If the situation in the UK feels alarming, then that in Australia offers little evidence to the contrary.

Performer Candy Bowers has written about sexually abusive behaviour as a student. When she reported the incident – unwanted comments about her body by an older man who then forcibly tongue-kissed her onstage without consent – her tutors urged to “get used to it, stop being so sensitive, toughen up”, and even to “take it as a compliment”.

Inside the actors’ studio

A number of professional organisations and training institutions have developed detailed codes to confront the issues faced, notably Screen Producers Australia, the Royal Court Theatre in the UK and the University of Sydney. But little work has been done to develop practice-based, experiential approaches to enable and empower the most vulnerable.

Reams of detailed legal documentation or standardised presentations may reassure institutions they’ve met their duty of care obligations – but how many 18-21-year-old dancers, singers, actors or technicians will actually take the time to fully engage with or read through a litany of complex clauses or phrases, let alone understand them? 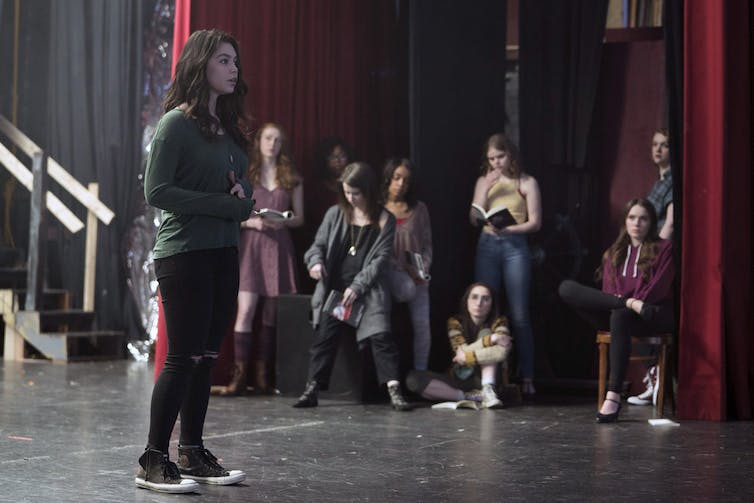 If we are genuinely to change the pervading culture, alternative strategies are needed. These strategies should not be solely dependent on intellectual processes, but also engage physicality and the use of gesture, the senses, and emotional intelligence. Sexual harassment, objectification, bullying, humiliation, homophobia and racism are all forms of oppression to be addressed in real, not academic, terms.

Read more: Acting unpleasantly: why harassment is so common in the theatre

Known as the Theatre of the Oppressed, the technique utilises live facilitation, imagery, dialogue and role play to empower communities and find solutions to social problems, such as homophobia.

Using this kind of approach to illustrate, unpick and interrogate the hierarchical structures in our training institutions – between those who have status and power (including professional practitioners, producers, teachers) and those who do not (students, technicians, supporting staff) – could prove vital in moving us forward.

And we can do it with what we do best. Performance has momentum. Using the medium to speak with those who are training in the performing arts could provide the platform from which to initiate change.

The Theatre of the Oppressed tackles homophobia.

At Edith Cowan University’s Western Australian Academy of Performing Arts (WAAPA), we are currently in discussion with the Media Entertainment and Arts Alliance (MEAA) to look at developing experiential, practice-based approaches to #MeToo training for performing arts students.

Those who deliver training at WAAPA will complete #MeToo and intimacy training. Interactive role-play and assertiveness coaching will build emotional intelligence and develop confidence in transactional communication. By “acting out” scenarios of harassment, coercion, or sexism we can experience their impact, test practical responses and make explicit what is not acceptable.

These steps will impart agency to young performers, but also help ensure their safety and welfare. Training that is genuinely creative and empowering liberates self-belief and the confidence to speak.

Instead of assuming that performing arts students are innately possessed of such qualities, we need to think about imparting them from the moment they arrive.

The training sector must embrace the important role of the intimacy director. Like fight directors, choreographers or stunt co-ordinators, this role focuses on the need to remove risk and ensure the highest possible standards of safety on film and theatre sets as well as in the TV studio.

Excellent work is being done in this area by organisations such as Intimacy on Set which offers a range of training packages as well as advice on ensuring safe working practices and protocols.

An injury can go from purely physical, to emotional and psychological – when someone’s body has been handled and touched in a way that is not suitable for that person … intimacy coordination work is about everybody being in agreement and consent … and about absolutely every detail serving character, serving story telling.

Referring to her work as Intimacy Coordinator on the BBC/Hulu adaptation of Sally Rooney’s award winning novel, Normal People, O’Brien points to the vulnerability of the drama’s young leading actors (Daisy Edgar-Jones and Paul Mescal) and offers an insight into how she approached early rehearsals.

Actors want to give their best. They want to say yes, but we had to create an atmosphere where they didn’t just say yes because they felt like they needed to …Everyone had the novel, so they knew what was required, but were they happy with it?

In my first rehearsal with director Lenny Abrahamson, and leading actors Daisy and Paul, I gave a presentation and showed all of them our intimacy guidelines. Then we worked on a scene that felt like a body dance. When we were done, everybody left knowing that everything would be handled in a professional way.

Locally, actor Michala Banas is working behind the scenes at Melbourne Theatre Company as an intimacy coordinator and cites O'Brien as a mentor.

If we are to guarantee the physical, emotional and psychological safety of our students during rehearsals and performances, then the guidance of an Intimacy Director is no longer an optional extra, but an absolute necessity.

Fear for our safety or for those around us can only ever be negative and destructive.

In the performing arts, we require those whom we train to be imaginative, courageous and sensitive. We ask them on a daily basis to take risks, to be experimental, to make new discoveries and to trust in the collective power of the ensemble.

Ensuring the establishment of clear and unambiguous boundaries between the personal and professional, together with a working environment that respects the rights of the individual can only ever liberate the work. The right to liberty and security of person is a universally declared human right. The right to resist, openly challenge and report inappropriate or abusive behaviour in the workplace is not a favour that is bestowed upon us by tutors or institutions.

A safe space does not exclude the ardours of rigour and tenacity or even the quest for virtuosity and eminence. Moreover, it does not stifle creativity or artistic freedom. How could it? On the contrary, the freedom, security and trust that a genuinely safe space engenders makes the pursuit of performance excellence tangible and achievable.