Earlier this month, horrific reports emerged of a baby girl dying in Katherine, while her mother was in police custody.

Without commenting on this specific case, it raises important issues that should be of concern to all of us, about what happens to children when a parent or carer is arrested.

People may be surprised to learn of the scope this issue and the potential for harm.

When we arrest adults, we are often arresting parents

Many children in our community confront the experience of parents being arrested on a daily basis. When we arrest adults, more often than not, we are arresting parents.

There are no publicly available arrest data. But recent Australian Bureau of Statistics figures support a cautious estimate that at least 100,000 Australian children each year have a parent who is arrested.

Read more: FactCheck Q&A: are Indigenous Australians the most incarcerated people on Earth?

Some of these parents will end up in prison. It is generally accepted by those working in this area that around 50% of imprisoned adults have dependent children. Conservative estimates note that more than 40,000 children experience parental incarceration each year in Australia.

Figures from our research with imprisoned parents also suggest most of these children will be under the age of ten.

Indigenous children are over-represented in this group, given the high rates of Indigenous incarceration in Australia.

But what happens to the kids?

Despite the frequency of parents being arrested, we know very little about what happens to their children.

Existing research has focused on children who witness arrest, consistently noting the long-term risk of trauma.

Much less is known about the arrest process, how this occurs and the immediate consequences for children, although recent Monash University research highlighted poor attention to children at this time.

Read more: As we imprison more adults, what's happening to the children?

Researchers are most concerned about those children whose parents are arrested and remanded into custody. There are many anecdotal cases of children being left alone, with no adult supervision and no basic provisions.

When police arrest a parent, there is no formal Australia-wide information gathering about the children. And specific guidelines to ensure children are “seen” and cared for are largely absent.

Some Australian states have agreements with child protective services. But often officers are unaware of the detail of these agreements, or their subsequent responsibilities.

These agreements are also typically framed in general terms. This means children’s safety is largely left to the interpretation and discretion of police officers, who have many competing responsibilities, and are often under-resourced to deal with children.

The result is that responses to children are individualised and haphazard. With no clear roles and responsibilities, children can fall through the cracks.

While some local, small scale research, including my 2015 study with colleagues - has shown evidence of good policing practices, these are not guaranteed, and nor are good outcomes for children.

Some parents more at risk

Some parents and children are more at risk. Our research shows mothers fall into this category, more often being primary carers of children. Indigenous women - the fastest growing group in prisons - and their children are even more at risk.

Our small, unpublished study by Monash University researchers in 2015 draws on data from 14 Indigenous women in Victoria and NSW, who were interviewed for a larger investigation. Their experiences show additional challenges for them and their children, with police reported to have more extreme responses than for non-Indigenous families.

These children were more likely to be either taken immediately into out-of-home care, or it was simply assumed that extended family would care for the children. Minimal attention was paid to ensuring suitable care. While it is clear police stations are not childcare centres, we need to ensure much better processes to protect vulnerable children.

Solutions to this problem are both very easy and very complex.

In recent years, we have seen policing become more responsive to issues that intersect.

For example, in some jurisdictions, police are required to actively ask arrestees about their Indigenous status, then follow specific guidelines in their interactions. The same goes for mental health. In Victoria, a protocol requires police attention to determining a person’s fitness for interview.

Three things we can do now

First, police officers need to ask about dependent children during any standard arrest. This is successfully done in other countries, such as Sweden, alongside a clear relationship with child protective services and relevant community services. 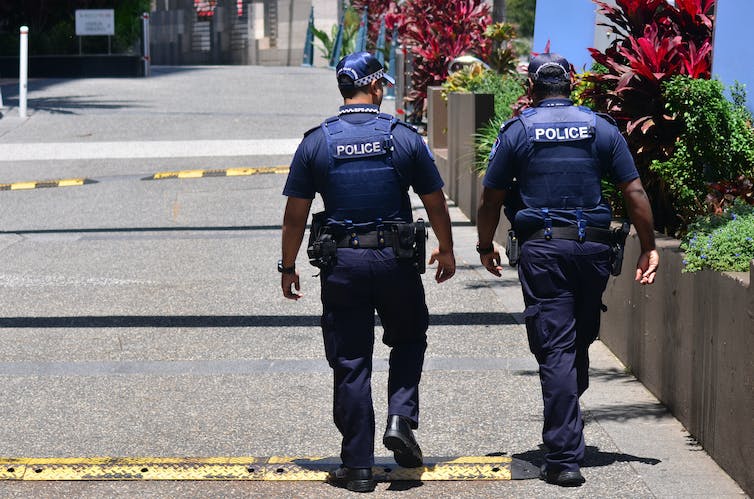 Police need to ask about dependent children during an arrest. www.shutterstock.com

And third, police services, in collaboration with child protection and relevant non-government specialist organisations, need to develop guidelines to care for children where parental arrest will likely see the immediate removal of the parent.

Collaboration across different sectors and a “child-aware” approach is already happening in other “adult-focussed” systems, such as mental health, alcohol and drug abuse and family violence. It is also possible here.

Change is possible. But unless it happens - and happens quickly - children will continue to fall through the cracks.

Read more: To fix the family law system, we need to ask parents what really works