In recent months, food security concerns have emerged for nations across Africa, Asia and the Middle East, as swarms of desert locusts wreak havoc on crops.

While the same level of damage isn’t currently being felt in Australia, the threat of infestations extends to us too. But drone technology is offering up solutions.

Not just a Biblical threat

In January, the United Nations Food and Agriculture Organisation (FAO) warned rising locust numbers in the Horn of Africa presented an “extremely alarming and unprecedented threat” to food security and livelihoods.

According to the FAO, a swarm of about 40 million desert locusts can eat the same amount of food in one day as about 35,000 people. Swarms can be as large as several hundred square kilometres, with as many as 80 million adults per square kilometre.

A review of records by the Australian Plague Locust Commission has reported eight large outbreaks in Australia since 1930. The FAO has encouraged the use of drones to provide early warning systems that may help prevent locust outbreaks. 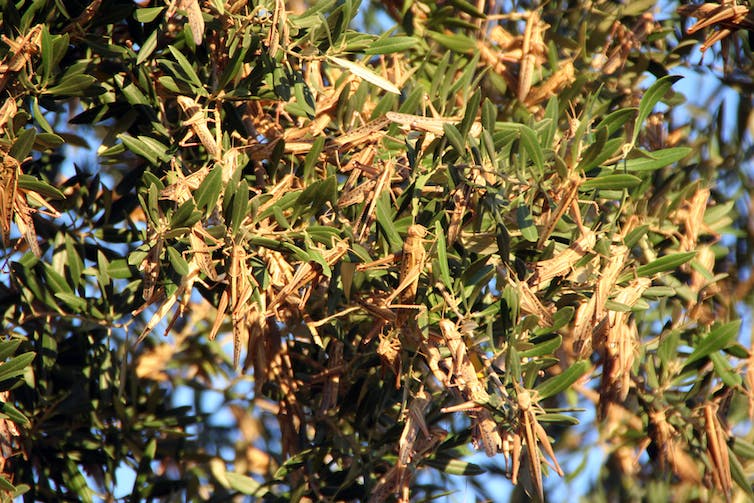 A swarm of spur-throated locusts sit on a tree in Longreach, Queensland. AAP/BIOSECURITY QUEENSLAND

In nature, locusts are controlled by birds, spiders, parasitic flies and wasps – but these aren’t effective when numbers explode.

In Australia, locusts are generally controlled by aerial spraying of pesticides from light aircraft. One solution may be to destroy eggs by ploughing in crops or pastures, but there’s no conclusive data on how effective this is.

Drones are now providing an innovative alternative to the more expensive use of light aircrafts. These aerial vehicles can be used to remotely sense areas, carry out pest surveillance and monitor crop growth.

They also allow for targeted pesticide application through atomiser sprayers that deliver a fine, even spray from liquid.

Read more: How many locusts does it take to start a biblical plague? Just three

Each state and territory of Australia has been affected by plague locusts at some point in the past, with outbreaks having occurred in Queensland, New South Wales, Victoria, South Australia and Western Australia. The latest April bulletin shows limited outbreaks in New South Wales. 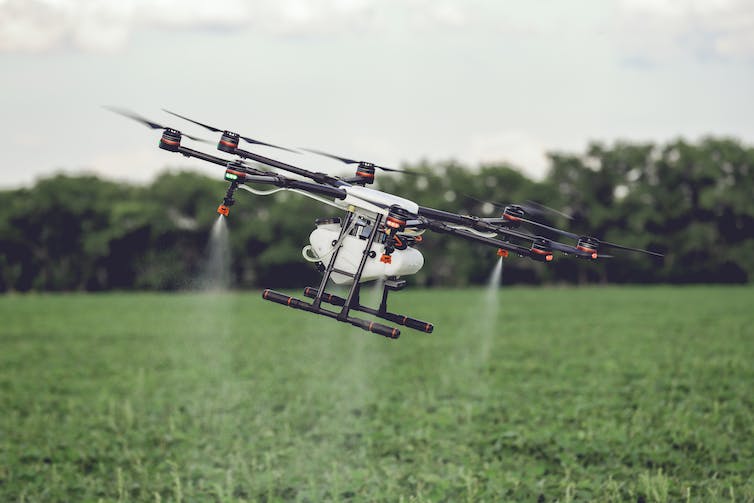 Agriculture drones can be used to spray fertiliser and pesticide on crops. Shutterstock

Drones can also be used in the aftermath of infestations. For instance, recent outbreaks in Kenya have seen the use of drones for post-disaster mapping. These maps, along with satellite information, can provide more accurate assessments of the extent of crop loss.

On-ground internet-connected sensors with thermal and image processing capabilities could also potentially be used to monitor the spread of infestations. These could provide additional real-time monitoring to support satellite imagery.

There are limitations when it comes to using drones to tackle locust problems.

Drones don’t perform well in areas that are densely packed with locusts, due to damage to propellers. And while the technical specifications of drones have made rapid improvements over the past few years, they still only provide a limited load of insecticide for spraying.

The duration of flying time for drones is also usually less than an hour. Flying drones requires a degree of expertise, and any commercial drone flying requires certification from the Civil Aviation Safety Authority.

Locusts belong to the same order of insects as grasshoppers, katydids and crickets. Locusts are grasshoppers that develop “gregarious” behaviours and become more voracious as a result.

Grasshoppers can become gregarious and start to swarm due to an increase in chemical serotonin in their nervous system. This results in them going from individual walking grasshoppers to flying locusts. There are no clear differences between locusts and grasshoppers other than behaviour.

In Australia there are three main pest locust species: the Australian plague locust (Chortoicetes terminifera), the spur-throated locust (Austracris guttulosa) and the migratory locust (Locusta migratoria). Controlling these pests is difficult when they travel in swarms.

Locust swarms can decimate swathes of crop in their way, consuming everything from leaves and grains, to pastures and even trees.

With ongoing locust infestations, a rise in extreme weather events, and now COVID-19, the struggles faced by farmers the world over are compounded. Improving current technologies and finding new ways to innovate may help ease this burden in the coming years.