NASA recently proclaimed it will put the “first woman and next man” on the Moon by 2024. Despite nearly 60 years of human spaceflight, women are still in the territory of “firsts”.

The first woman in space was cosmonaut Valentina Vladimirovna Tereshkova, who orbited Earth 48 times from June 16 to 18, 1963.

Her flight became Cold War propaganda to demonstrate the superiority of communism. At the 1963 World Congress of Women, Soviet leader Nikita Khrushchev used Tereshkova’s voyage to declare the USSR had achieved equality for women.

Women across the world took heart and dreamed they too might travel to space. Ekaterina Ergardt, a Soviet state farm worker, wrote to Tereshkova:

I am eighty years old. I started to live in the years of the beginning of women’s struggle for a life of freedom and equality … now the road to space is open for women.

Despite this optimism, it was 19 years before another woman was allowed to venture beyond Earth.

In the United States, women were excluded from space by the restriction that astronauts had to be military test pilots – a profession barred to them.

While the first American astronauts – known as the Mercury 7 – were training in the 1960s, aerospace doctor Randy Lovelace recruited 13 women pilots and put them through the same paces as the male astronauts. The “Mercury 13” outperformed the men on many tests, particularly in how they handled isolation.

But NASA wasn’t convinced. A congressional hearing was held to investigate whether women should qualify to be astronauts. In her testimony, Mercury 13 astronaut candidate Jerrie Cob said:

I find it a little ridiculous when I read in a newspaper that there is a place called Chimp College in New Mexico where they are training chimpanzees for space flight, one a female named Glenda. I think it would be at least as important to let the women undergo this training for space flight.

She was prepared to take the place of a chimp, if that was the only way to get into space.

Message in a bottle

Historically, even those like Lovelace who believed women should go to space have seen their role as helping men, acting as a civilising influence, or providing sex.

In one sense the first women on the Moon were Playboy playmates, in the form of pictures jokingly included in the Apollo 12 astronauts’ checklists. Their names were Cynthia Myers, Angela Dorian, Reagan Wilson, and Leslie Bianchini. The women’s bodies were likened to the lunar landscape: both the object of male conquest.

In popular culture in the 1960s, women were often associated with magic and emotion rather than science and technology.

The sitcom I Dream of Jeannie depicted the relationship between a US astronaut and a magical djinn or genie, imaginatively named Jeannie. NASA was an advisor for the series, which mirrored real space events. Jeannie represented seductive oriental femininity in opposition to the strait-laced, masculine, all-American astronauts. 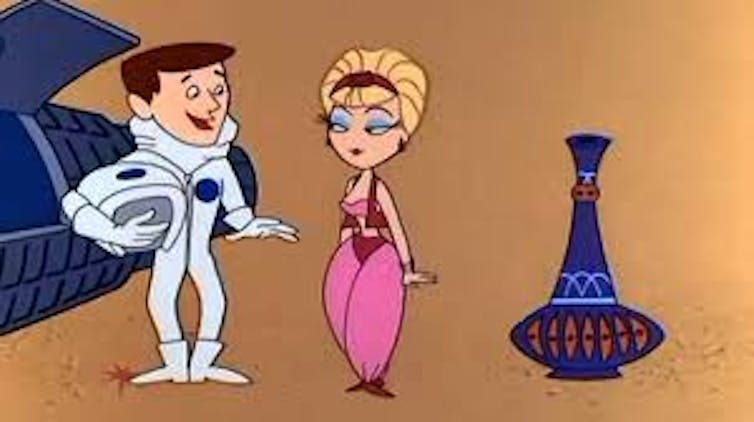 While Major Tony Nelson was carried into space enclosed in his capsule, Jeannie was imprisoned on Earth in hers. Still image from the opening sequence of I Dream of Jeannie. YouTube

(In the similar sitcom Bewitched, the witch Samantha travelled to the Moon for picnics before she renounced her craft to be a regular housewife.)

The message was clear in popular culture: women needed to stay in the kitchen – or the boudoir. These sitcoms are still aired around the world.

Read more: 'I Dream of Jeannie' left us with enduring stereotypes

From aprons to spacewalks

By the 1970s, the women’s movement had made great strides and NASA had to adapt. The first women were admitted to astronaut training in 1978. Not to be outdone, the USSR rushed more women into its own program.

In 1982 Svetlana Savitskaya visited the Salyut 7 space station, becoming the second woman in space and the first to perform a spacewalk. But she wasn’t allowed to forget the nature of women’s work: when she arrived, her male colleagues presented her with an apron.

The following year, Sally Ride flew as a mission specialist on the Space Shuttle Challenger, becoming the first US woman in space. The first American woman to spacewalk was Kathryn Sullivan in 1995. 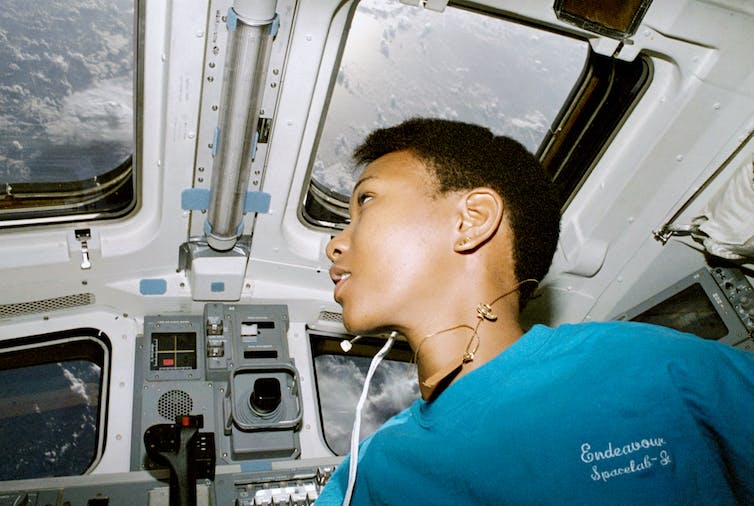 Astronaut Mae Jemison was the first African American woman in space in 1992 as the science mission specialist on the Space Shuttle Endeavour. Here she looks toward Earth from the flight deck. NASA

In the 21st century, there are still barriers to women’s equal participation in space. In March 2019 the first all-woman spacewalk was cancelled because there were not enough medium-sized spacesuits. Astronauts Christina Koch and Jessica Meir subsequently accomplished the feat in October 2019.

Discussing the cancellation, NASA administrator Ken Bowersox made clear the ideal astronaut body is still male. He blamed women’s smaller average stature, saying they were less able to “reach in and do things a little bit more easily”.

Read more: Female astronauts: How performance products like space suits and bras are designed to pave the way for women's accomplishments

‘Weightlessness is a great equalizer’

Is it women’s bodies that are the problem, or a space world built for men? What would space technology designed by and for women look like?

There is a massive gender data gap in space. There has been much less research on the effects of microgravity on women’s bodies than there has been for men.

However, women in many ways are ideal astronauts. Physical strength and height are not advantages in microgravity.

Women use less food and oxygen, maintain their weight better on restricted diets, and create less waste. In the words of Sally Ride, “weightlessness is a great equaliser”.

Women’s access to space, not just as astronauts but as users and creators of space services like Earth observation and satellite telecommunications, is still far from equal. But there are signs of progress.

One is the Space4Women program run by the United Nations Office of Outer Space Affairs (UNOOSA), which aims to ensure

As UNOOSA director Simonetta di Pippo has noted, 40% of the targets of the UN’s sustainable development goals rely on the use of space science and technology. 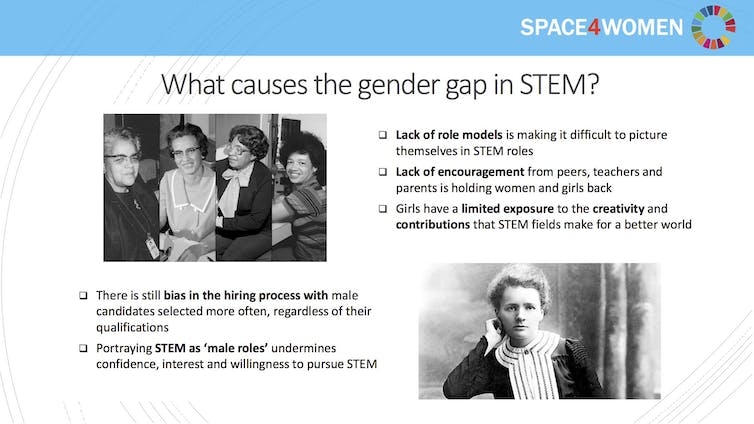 NASA’s plan to land a woman on the Moon is another positive sign. On her post-orbit world tour in 1964, Valentina Tereshkova expressed her own desire to go to the Moon, but she never made another spaceflight.

Now aged 83, Dr Tereshkova has had a distinguished career in science and politics and remains a sitting member of the Russian parliament. To see a woman set foot on the lunar surface within her lifetime would truly be a ground-breaking moment.